The 36-year-old Chhetri overtook Messi to be the second highest international goal-scorer among active players. 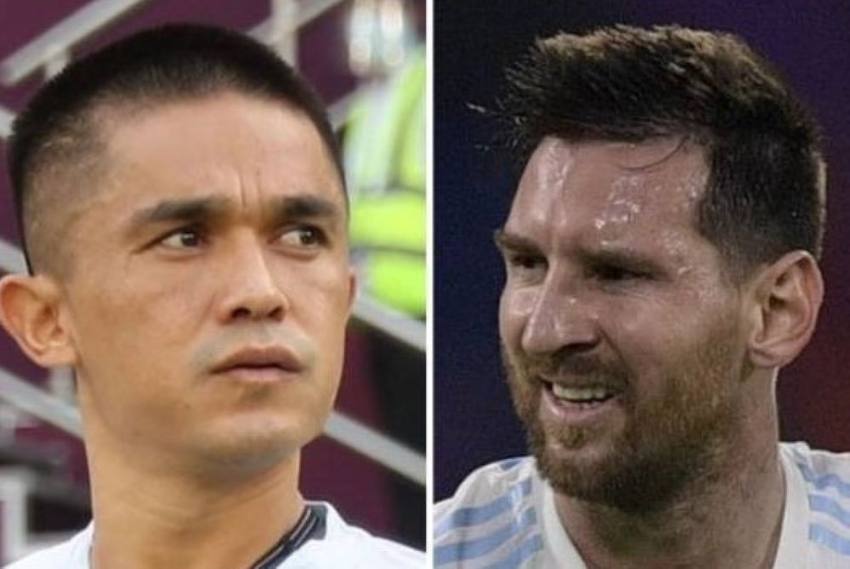 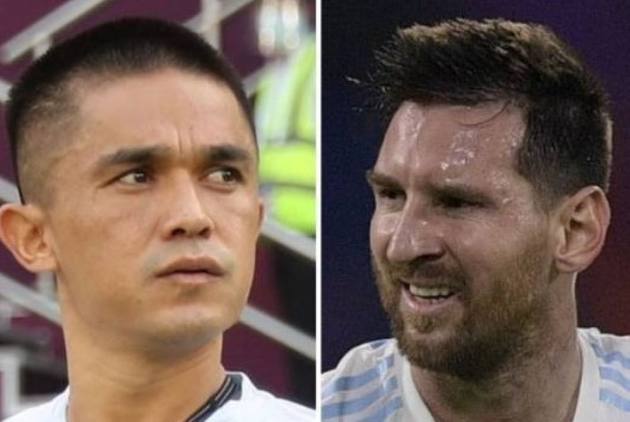 Lionel Messi's mesmerizing runs on a football pitch can make a sad Sunil Chhetri happy, the talismanic India captain said on Saturday, and made it clear that comparing him with the Argentine virtuoso is akin to living in a "stupid cocoon". (More Football News)

The 36-year-old Chhetri has more than once brushed aside any comparison with Messi whom he has overtaken to be the second highest international goal-scorer among active players.

"When I am sad, I watch Messi's videos and it makes me happy, so when I meet him, I will tell him I am a fan (of him), give him a nice handshake, and that is about it," Chhetri said in an AIFF interview to mark his 16 years of international career.

"I would say 'Hi, I am Sunil Chhetri and I am a big fan'. I will not trouble him. If I meet him, I will be happy, if I don't, I am still good," he said when asked what he would do if he meets Messi.

Chhetri overtook Messi (72 goals) with his second goal -- and 74th overall -- in India's 2-0 win over Bangladesh in a World Cup qualifying round match on June 7 in Doha.

"Along with everyone else in the world, I am also a huge fan of Messi. There is no comparison whatsoever. I am just happy that I get an opportunity to score for my country and I feel proud.

"(But) I don't get into the stupid cocoon of comparing myself with all those great players. There are thousands of players who are better than me, and all of them are also fans of Lionel Messi. That’s the gap."

It was on this day 16 years ago that Chhetri donned the India jersey for the first time, in a match against Pakistan in Quetta under then head coach Sukhwinder Singh.

Since then, he has gone on to play 117 matches for India, scoring 74 goals -- the second-most for an active international player. He is just three goals shy of the great Pele's tally.

"It has been a wonderful and amazing journey. To play for the number of years for the national team, to represent the country the number of times I have, it's been outstanding. It is beyond a dream."

When Chhetri came to the scene in the national team, there were stalwarts like Bhaichung Bhutia, Renedy Singh and Mahesh Gawli. Now, at 36, he is the senior-most player and he sometimes feels lonely among the "kids".

"... (it feels like) just yesterday, that these two kids came in - Sandesh (Jhingan) and Gurpreet (Singh). And now those two are the main players here, that’s how time flies.

"There are so many kids who are now calling them 'Sandesh bhai', 'Gurpreet bhai'. The gap is huge now. I don't have anyone even close to my age or era.

"But it's good to be around kids. They teach me a lot of stuff with their excitement and fearlessness. I try to grasp whatever I can from this lot."

Chhetri still takes advice from former captain Bhutia who has a huge influence on him.

"Just two days back, I was having a chat with Bhaichung da. I was telling him how I miss the old camp, purely because now I don't hang out with anyone. I'm in my room only.

"I learnt a lot from him. He was relentless in the way he approached a game. His mentality was bulletproof. He was at it, every game. The first challenge, the first tackle was always Bhaichung da.

"The one to fight for lost causes was always Bhaichung da. And when as a senior you saw that our captain, the most senior guy was working so hard, it rubbed on us. There's nobody better than Bhaichung da."

Chhetri said his competitive spirit came mostly from his mother, a former Nepal international footballer, who would play with him many indoor and outdoor games during his childhood.

"I remember I always wanted to beat my mum, but till the time I was 13, I could not beat her. And she never wanted to lose either. I think the fact that I don't like losing, a big part of that comes from my mum.

"One day, I was complaining that I had nobody to play with, and my mum came to play with me in the heat of Delhi summer. There would be loo blowing outside. For the whole 10-15 days of summer vacation, I used to play foot tennis with my mum, and that was amazing."