In a Copa America quarter-final clash dominated by Chile, who had to wait until the penalty shootout to edge past Colombia. 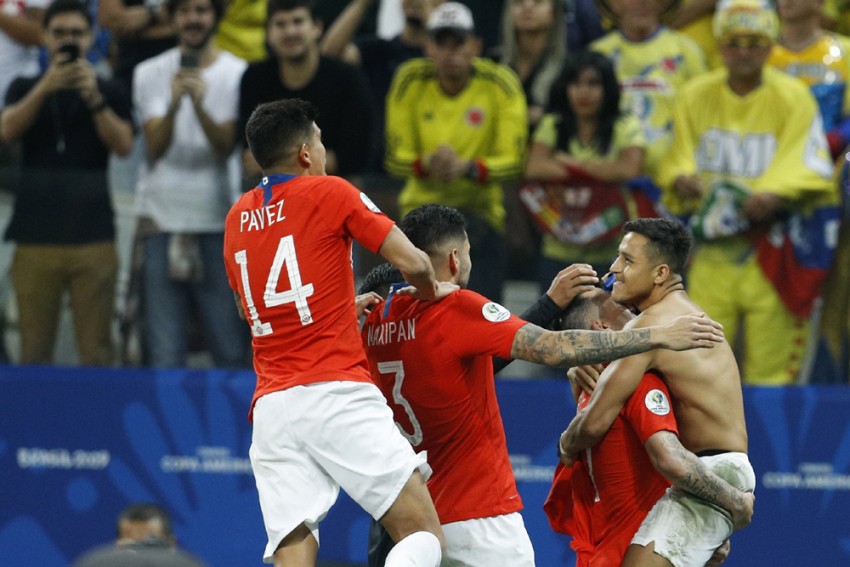 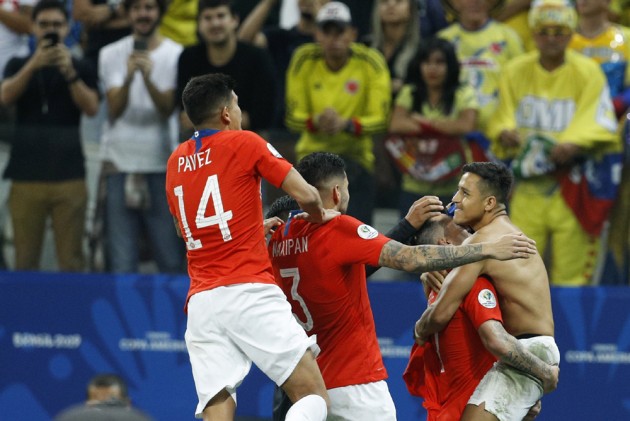 Champions Chile maintained their hopes of a third straight Copa America victory after beating Colombia on penalties on June 29 to reach the semi-finals.

Chile could have won the game in normal time but had two goals ruled out for marginal decisions in a scoreless draw, before Alexis Sanchez stroked home the winning spot-kick.

It was a just reward for the champions after dominating a match in which Colombia held on thanks to a couple of tight VAR calls.

Charles Aranguiz had a goal ruled out in the first half for a marginal offside against Sanchez in the build-up to the move.

And after Arturo Vidal shot low into the far corner on 70 minutes, that was chalked off for a handball against Guillermo Maripan, who had teed up the Barcelona midfielder.

Following eight successful penalties, William Tesillo casually put his effort wide for Colombia, leaving Sanchez to be the hero, as the Manchester United forward continues to make up in Brazil for a dreadful club season.

"We dominated practically the whole match. It was a great match against a team with a lot of quality," said Vidal.

"We scored two goals that unfortunately VAR annulled. We deserved to have won in normal time, we couldn't, but we managed to score the five penalties and went into the next round."

They will face either Uruguay, who beat them 1-0 in the group stages on Monday, or Peru in Wednesday's semi-final in Porto Alegre.

"Penalties are more in the hands of God than the players, that's the way they've always been and always will be," moaned Colombia coach Carlos Queiroz.

The first half was dominated by Chile's 16th-minute goal being controversially disallowed.

Jean Beausejour made a surging, overlapping run down the left and his inviting cross was spilled by Arsenal goalkeeper David Ospina after Davinson Sanchez got in his way, allowing Aranguiz to nip in and slot home from a tight angle.

But much to the bemusement of many watching, the referee consulted VAR and the goal was chalked off for the most marginal of offsides.

Until then, Colombia had been the better side. On five minutes, a Radamel Falcao cushioned header found Roger Martinez but the forward wanted an extra touch and his goal-bound volley was charged down.

James Rodriguez then had a free-kick in a dangerous position but failed to clear the defensive wall.

Ospina made an incredible one-handed save on 12 minutes to keep out an Eduardo Vargas header from a Jose Fuenzalida cross, but it wouldn't have counted anyway as the ball was deemed to have been out of play.

Soon after the disallowed goal tempers flared as Sanchez squared up to Wilmar Barrios, only to then find himself face-to-face with Colombia's giant center-back Yerry Mina.

Chile were by now in control of proceedings and Maripan headed over from a Beausejour cross.

The champions were buzzing and Mauricio Isla threaded a through ball to Vargas, whose shot was blocked by a sliding Mina.

Chile were looking increasingly threatening as Sanchez fired wide, Fuenzalida had a shot blocked and Vidal went closest yet with a curler from 18 yards.

Colombia made a bright opening to the second period as Rodriguez curled a free-kick into the side-netting and Juan Cuadrado sliced well wide on a rapier counter-attack.

Ospina was having a jittery performance and needed two attempts to gather a long-range Vargas strike.

The best chance of the match came on the hour when Aranguiz slipped in Sanchez behind the defence but under pressure from a backtracking Davinson Sanchez, the

When Chile had the ball in the net again on 70 minutes after Vidal fired home through a forest of legs into the far corner, Argentine referee Nestor Pitana again signaled to VAR and Colombia were reprieved for the second time.

Chile continued to boss proceedings right to the end but in the shoot-out, it was third time lucky as not even VAR could deny them victory this time.