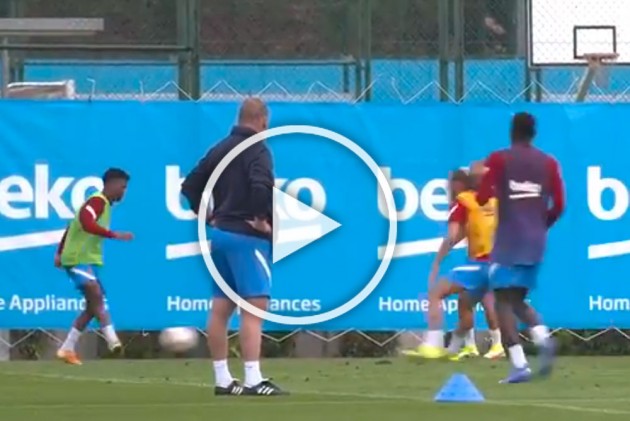 The 18-year-old Fati returned to training with teammates on Tuesday and hopes to soon be fit enough to boost Barcelona’s attack, which was depleted by the departure of Lionel Messi.

Fati hasn’t played in a match since the promising forward injured his left-knee meniscus against Real Betis in the Spanish league last November.

Barcelona posted a photo of Fati smiling during Tuesday’s session.

He is expected to be ready to play in matches again in a few weeks.

Fati's initial recovery time was about four months, but there were several setbacks and he needed more than one surgery to fully heal.

The problems kept him from playing with Barcelona and also ended his chances of making Spain’s squad for the European Championship and the Tokyo Olympics. He had made his debut with the national team not long before injuring his knee.

Fati's return gives Barcelona coach Ronald Koeman another option to help make up for Messi’s absence. Messi joined Paris Saint-German after the Catalan club couldn't give him a new contract because of its financial struggles.

Memphis Depay, Barcelona's biggest offseason signing, is off to a good start, being flanked in attack by Antoine Griezmann and Martin Braithwaite. The club also signed veteran striker Sergio Aguero, but he is injured and not expected to play until October. Another forward coming back from injury is Ousmane Dembélé.

Fati has scored 13 goals in 43 matches with Barcelona. He had scored five times in 10 matches before getting injured against Betis, including a goal in a “clásico” against Real Madrid at the Camp Nou Stadium. He is the youngest scorer for Barcelona and Spain’s national team.

Barcelona opened its Spanish league campaign with a 4-2 win over Real Sociedad, followed by a 1-1 draw at Athletic Bilbao. Its next game is Sunday against Getafe.
(AP)