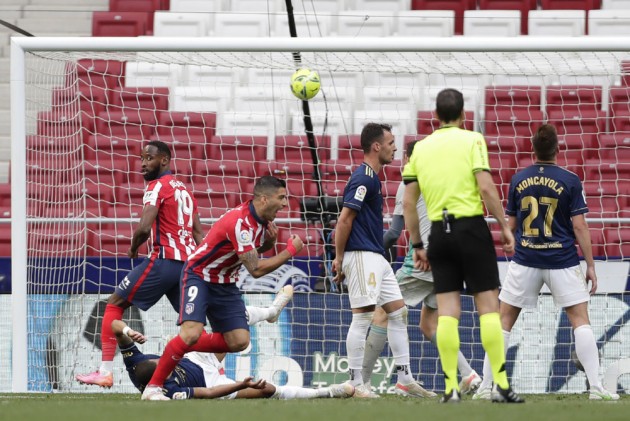 Luis Suarez scored an 88th-minute winner to earn Atletico Madrid a dramatic 2-1 comeback win over Osasuna that keeps their LaLiga title hopes in their own hands heading into the final matchday. (More Football News)

Their dreams of a first title since the 2013-14 season appeared to have suffered a damaging blow 15 minutes from full-time when Ante Budimir struck completely against the run of play in Sunday's clash at Wanda Metropolitano.

Diego Simeone's side had earlier wasted a string of opportunities, twice hit the post and had strikes from Stefan Savic and Yannick Carrasco ruled out, though they dug deep to turn the game around in the final eight minutes.

Substitute Renan Lodi equalised and Suarez atoned for some earlier misses by firing in a winner for Atleti, the result moving them two points above Real Madrid – the only side that can now catch them – with one game left in the season.

That was wild... But we take the three pointspic.twitter.com/H1fPI3hZQb

Match-winner Suarez was twice denied by Sergio Herrera in the opening 15 minutes and dragged wide from another one-on-one, either side of pinging a shot against the post from inside the six-yard box.

Saul Niguez then clipped the post from range in a first half dominated by Atleti, who were further frustrated with an hour on the clock as Savic's powerful finish was ruled out for offside.

That frustration turned to anger from Simeone's perspective when Carrasco found the net but was also rightly flagged for offside, paving the way for a dramatic finale in the Spanish capital.

Budimir scored from one of Osasuna's two shots on target with a header at the back post that Jan Oblak thought he had scooped away, only for replays to show the ball had clearly crossed the line.

But with Atleti needing two goals to swing the title race back in their favour, Joao Felix played in fellow substitute Lodi to hammer home and Suarez then picked out the bottom-left corner with a first-time finish late on to seal the most dramatic of wins.

What does it mean? Atleti one game from glory

Simeone's side have been top of the table for 29 matchdays, yet heading into the final 10 minutes here they had temporarily slipped behind Madrid in the table as the title race took a crazy twist.

Incredibly, this is just the second time Atleti have won back-to-back games in LaLiga since the end of January and they now just have to match Madrid's result on the final day.

They travel to Real Valladolid next weekend and Madrid – two points behind after beating Athletic Bilbao 1-0 – host Villarreal. Barcelona's 2-1 loss to Celta Vigo elsewhere on Sunday means that it is now a two-horse race.

Atleti’s profligacy so nearly came back to haunt them, with Suarez the guiltiest of the lot in terms of failing to take his chances until the late winner.

The Uruguay international finally found a way through via his seventh shot of the game, that goal ending a five-match scoreless streak and taking him to 20 for the season in LaLiga.

19 - Luis Suárez has equaled Youssef En Nesyri as the player to have provided the most points for this team thanks to his goals in #LaLiga this season (20 goals - 19 points). Decisive#AtletiOsasuna pic.twitter.com/ThPzKCASEk

Budimir so nearly the party pooper

The Croatia striker stunned Atletico with his goal 15 minutes from the end, peeling away at the back post to get his head to Ruben Garcia's cross for what looked like being the winner.

That did not prove to be the case, of course, but Budimir certainly played his part in a gripping match with what was his seventh headed goal this season - the most of any player in LaLiga.

It all comes down to the final day in the race to be crowned LaLiga winners. Atleti travel to Real Valladolid on the same day that Madrid host Villarreal. As for Osasuna, they are at home to Real Sociedad in their concluding game of 2020-21.