Sidhu's Hug To Bajwa Should Have Been Seen As Gesture Of Civility, Nothing More 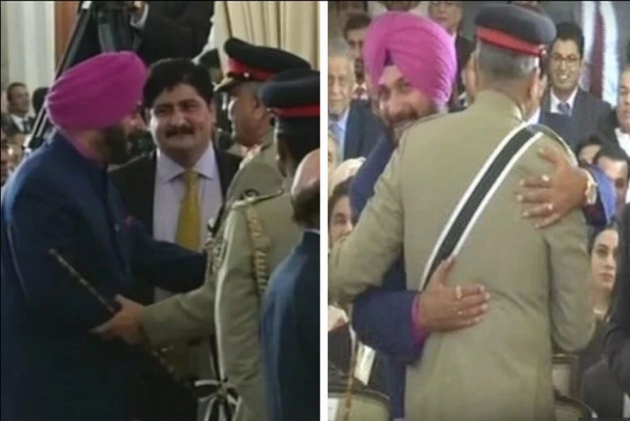 The controversy over Navjot Singh Sidhu’s recent trip to Islamabad indicates a growing sense of unease among the right-wing hardliners in the ruling BJP.  But the move to “name and shame” him also exposes the Congress’ paranoia of yielding ground to the nationalists on the Pakistan question, especially on an election year.

However, the Sidhu hug to the Pakistani army chief should be seen in its context.  Even countries that had been at war with each other shake hands when the occasion demands. The warm embrace of Bajwa by the former cricketer should have been seen as a gesture of civility and nothing more.

Moreover, despite the rising criticism, it would not alter the situation at the Line of Control or bring an immediate change in Pakistan’s policy towards India. It could only happen through sustained dialogue between the two neighbours to tackle their outstanding issues and with a firm commitment from Islamabad to make no compromises with terror groups working against Delhi from its soil.

One may have a different view on whether Sidhu should have avoided hugging the Pakistani army chief in public. But it should not be seen as an attempt on his part to condone Pakistan’s policy towards India or showing disrespect to Indian soldiers or their families.

Rather, Sidhu’s visit to Pakistan should be seen in the changed scenario and which is also in synch with the Modi’s government’s recent gesture towards Pakistan.

Sidhu’s criticism from  BJP hardliners could be understood as the party continues to advocate no talks with Pakistan until it ends terrorism as a policy towards India. But the Congress’s reaction on this controversial issue has been baffling.  His detractors within and outside the party might have taken this opportunity to cut the high-flying politician to size. However, the Congress leadership should have kept the political and diplomatic fallout of Sidhu’s visit in mind before joining the sections who are crying for his blood.

Indications suggest that Sidhu’s decision to attend Pakistan’s new Prime Minister Imran Khan’s inaugural ceremony was taken with large doses of salt by the Congress leadership. Perhaps policymakers in the party were more worried on whether the visit would Congress as a party “not tough enough “ to deal with Pakistan on an election year as the BJP.

But the Congress could have taken the moral high ground and showcased his visit as an indication of its desire for peace with Pakistan. Instead, it hit the panic button soon after pictures and reports of the Sidhu-Bajwa hug started circulating in the social media and publicly pulled him up.

Sunil Gavaskar and Kapil Dev, two other Indian cricketing icons who also received personal invites from Imran to attend his inaugural ceremony, might have had their own reasons to politely decline the invitation.

But the Congress party should have praised Sidhu for showing political maturity in going to Pakistan. Instead, its criticism of its Punjab minister shows on the issue of dealing with its tricky neighbor, the Congress not only lacks imagination but  has no policy of its own that is any different from the one being advocated by BJP hardliners—no talks or engagement with Pakistan.

It should be kept in mind that Sidhu’s visit was in consonance of India’s current policy towards Pakistan. PM Modi had called up Imran Khan much before it was clear that he had the requisite numbers to be elected as Pakistan’s new prime minister.

Modi’s gesture clearly indicated to Imran and his party colleagues that India was willing to ignore allegations of malpractices questioning the legitimacy of his emergence as a leader of the largest party in Pakistan’s parliament. Rather the Indian PM welcomed his election and hoped that there will be a change in Pakistan’s policy especially, in dealing with terrorism emanating from its soil.

The Sidhu visit  to Pakistan therefore, should be seen for what it was meant to be— a friendly gesture to another friend in the cricketing world and who now happens to be Pakistan’s Prime Minister. But the entire visit is now being seen through the controversial hug between Sidhu and Bajwa. Unfortunately, the Congress   is as much at fault for perpetuating this negative image of the Punjab minister  as much as the BJP.