Home  »  Website  »  National  » Opinion  »  Should You Pay For Higher Education, And How Much?
Column | Cheat Sheet

In a country like India, where primary education remains a luxury for many, higher education is a crucial avenue of serious upward mobility, not least because so few get access to it. 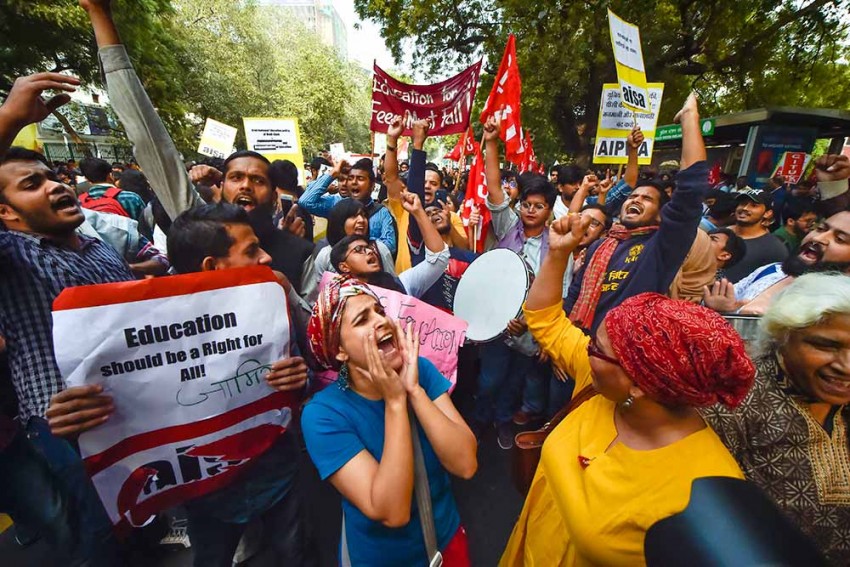 In this file photo, hundreds of people join the protest by Jawaharlal Nehru University students against the hostel and mess fee hike, in New Delhi. (PTI/Ravi Choudhary))
Saikat Majumdar November 27, 2019 00:00 IST Should You Pay For Higher Education, And How Much? 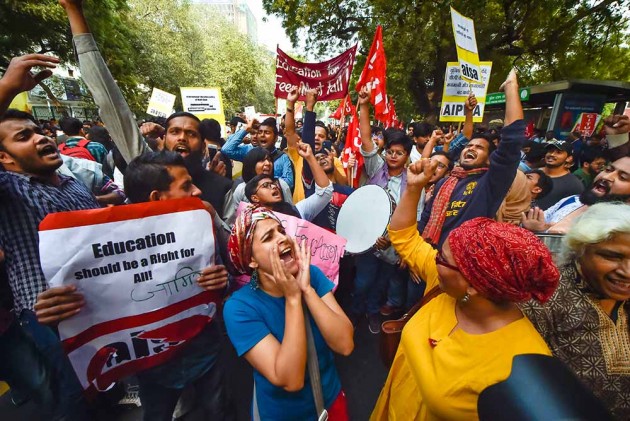 This is the primary version of the cost question that resonates in the mind of Indian taxpayers. And anyone who has followed the trail of this question these past few weeks knows that this has been sparked afresh by the proposed JNU fee hike, which promised to place the cost of education there in a different price bracket altogether.

JNU is a sensitive axis to ask this question around in India. In a country where primary education remains a luxury for many, higher education is a crucial avenue of serious upward mobility, not least because so few get access to it. JNU has been a particularly urgent symbol of this access for a variety of reasons – including its location in the nation’s capital, and the high quality of its faculty, students, and research.

But probably the most important reason is a large number of socially and economically marginalised students it has been able to recruit, due to the deprivation points system linked to its admission system. The sudden rehauling of its fee structure threatens to throw many of them outside this system and keep it perpetually out of their reach.

The question on education need not have only two answers: either the student pays or the government. The facts on the table are clear. Quality higher education is expensive. And no one party can bear it alone. Much less in a country of such staggering social and economic diversity as India.

The answer lies not just a binary choice between the government and the student, but rather in a whole spectrum.

According to the Hechinger Report, which uses a tool called Tuition Tracker, the University of Chicago is likely to become the first American college in 2025 where the cost of attending will be $100,000 a year. The skyrocketing cost of college in the US is a cancerous problem that is as deadly for the country’s middle class as it is for the nation’s universities.

Happily, that problem is not relevant to India today, not by a long shot. What is relevant is the story of Griffin Badalamente, who, according to the Hechinger Report, is a current third-year student studying computational neuroscience there. Outside a small National Merit scholarship, his family pays the full price of attendance, currently at $57,642 a year.

When told about the UChicago’s projected cost at $100,000 in a few years’ time, he laughs and says, “That’s not surprising.” He goes on to say: “My parents make enough money luckily for me to pay the full tuition.” Upward of $100,000 for tuition, fees, books, room and board and other expenses is “more money than it should cost, but I guess if it’s subsidising people who wouldn’t have that opportunity, I feel a little bit better about it.”

We’re fortunate that the cost dimensions of higher education in India are a fraction of that in the US. But it is the principle of it that needs noticing. The limitation of the universal system of state-subsidized higher education is that a poor country like India cannot generate enough resources for higher education through taxes alone.

There are many middle and upper-middle-class families that are capable of paying more than the heavily subsidised rates for higher education in our public universities, which, heaven knows, are not exactly flush with resources at the moment. I would imagine that there are many students in JNU whose families are happy to pay far more than Rs 20/month for hostel rooms if they know that their contributions are subsidising the cost for many of their less-privileged classmates. This is also an important way of discharging social responsibility.

Nor will a binary model of full-sticker price vs BPL or below poverty line work. A black and white system will leave all families in the grey – everybody in between would slip through the cracks. The need of the day is a highly staggered system of financial aid, where families can pay tuition calibrated for their specific volume of assets and income.

We also need a more robust system of students working while studying, and working in ways that are meaningfully connected to their academic lives. Advanced and postgraduate students can comfortably work with the research and teaching needs of the university in a mentoring capacity, as they already do in many instances.

Finally, even as the nation (hopefully) raises its education budget, private philanthropy must also step up and do its bit. The great suspicion of privatisation of higher education in India, even of private-public partnerships, comes from the profiteering – some would say racketeering – the behavior of private institutions and education networks.

If Indian universities are to be globally competitive, we need to put more resources into them. And while the government needs to expand its education budget, the government cannot do it all, particularly when glaring needs in primary education cries out for more urgent assistance. When it comes to creating sustainable models of high-quality postsecondary education, the support must come from a combination of staggered tuition, government support, revenue-generating student labour, and intelligently invested private and corporate philanthropy.

Saikat Majumdar, Professor of English & Creative Writing at Ashoka University, is the author of several books, including, College: Pathways of Possibility (Bloomsbury, 2018). @_saikatmajumdar