How The Unlucky Number 13 Became Lucky For Joe Biden

Though 13 out of 67 counties in Pennsylvania voted in Biden's favour, giving him a winning lead over Trump, he'll have to work hard to retain that support 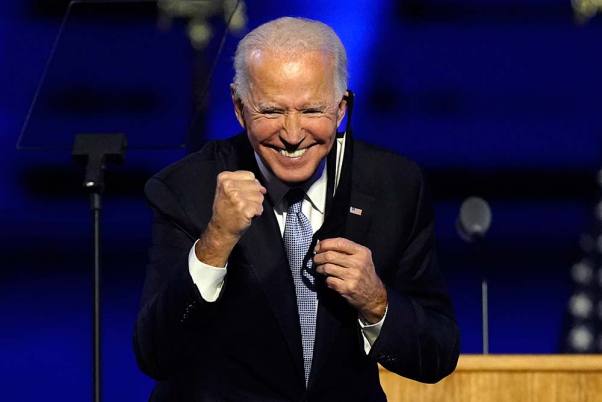 “I do not believe in the system. I do not trust the politicians. I will not vote”.  I heard many such comments from frustrated voters in Pennsylvania when canvassing for the Biden-Harris campaign.

The apathy was strikingly apparent among many voters, and dispiriting to anyone trying to deliver a positive message. Disappointment about rising unemployment, public housing, spiking healthcare costs,issues around national security, faith and immigration went hand in hand with the anger towards politicians who seemingly do not care about their plight.

Yet, as Americans waited for days to see the climax of the much awaited election results, it was Pennsylvania that tipped the voting scale towards their own Scranton-born Joe Biden. The ‘supposedly’ unlucky number 13 became lucky for Biden in 2020 elections when 13 out of 67 counties in Pennsylvania decided to swing towards him giving a 47,000 lead, as it stands now, over Trump. Biden’s moderate approach towards policies and ability to cross the isle to shake hands with people holding differing political ideologies seems to have encouraged many independent voters and some Republicans to lean towards him.

Also Read| Joe Biden Will Be Good For India

It is interesting to look at the post-election map of PA, with the different counties shaded in red or blue based on the election outcome. The whole state looks blazing red indicating a strong Republican flavor, while a tiny pocket in the Southeastern part remains blue for Democrats, primarily consisting of Philadelphia and surrounding counties. Then we have a spot in the middle named Center County and another county named Dauphin like a small oasis of blue among flaming red counties surrounding it. On the Western side, we have another exclusive county named Allegheny, which carries Pittsburg that is bluer.

Pennsylvania (PA), which was a Republican state in the seventies and eighties, turned towards Democrats since 1992 until 2012. PA presidential election history shows that the State oscillates between Democrats and Republicans in a span of decades since 1930s. When Trump successfully wooed Pennsylvanian voters towards him in 2016, PA became a battleground state in the US election cycle 2020.

Also Read| US Elections: The End Is Not In Sight

When I walked along the streets of Reading, it was interesting to see how Biden yard signs and Trump yard signs alternated between neighboring homes. How family members held different political ideologies under one roof. When a voter shared that he and his dad were strong supporters of Trump, his son remained a Biden fan, a generational divide visible in many families in the area. When a senior citizen vehemently advocated for Trump, her loving son politely left the conversation. His mother shared how this election is affecting family and neighborly relationships in the name of Biden and Trump. When voters proclaimed how their home will be lit up with blue lights or celebrate in various ways if Biden won, many Trump fans proudly displayed the life-size poster of Trump in his macho vest and machine gun in his hand, underlining their solidarity with what he represents.

When the entire US saw a historical increase in voter turnout in 2020 elections, both the candidates saw a surge in their share of votes in their respective red and blue counties. When Trump won PA in 2016 by a margin of 44,000 votes, Biden reclaimed it with a slightly better margin of 47,000 votes. However, Biden widened the vote gap between him and Trump in 2020 considerably compared to vote gap between the candidates in 2016 while reclaiming two additional Counties, Erie and Northampton to the Democrat pack.

The enthusiasm for Biden was particularly evident in Montgomery County, where Jill Biden grew up. Montgomery enhanced the voter gap between candidates in 2020 and 2016 by 40,000 votes. Biden often jokes that he is known as ‘Jill Biden’s husband’ in those regions. Montgomery’s neighboring counties, Delaware, Bucks and Chester County too saw an upsurge in Biden voters.

Pennsylvania has 81.6% of white Americans, of which a good majority are blue-collar workers. The average annual individual income is just below $33,000. Except for certain pockets like Philadelphia, Pittsburg, Harrisburg regions, PA is a relatively poor state. The rise in unemployment owing to COVID crisis and the fear of job loss related to fracking has been unsettling in Pennsylvania. Trump capitalized it very well by sending a strong message to the Appalachian dwellers that Biden plans to shut down the entire fracking areas in the name of renewable energy, which is a strong message to Pennsylvanians whose livelihoods depend on it. This has reinforced Trump’s foothold in the state.

However, Biden who grew up in Scranton, Lackawanna County, hails from a middle-class family where his father lost his job when he was a child. Joey, as he was fondly called by his family, has experienced job loss and financial struggles first hand. Considering that Trump comes from the NY billionaires club, Biden’s campaign focusing on the “Scranton vs Park Avenue” resonated well with several working-class families.

Other major issues that concerned white voters were national security and the call for defunding police departments in the wake of Black Lives Matters protests. Trump’s campaign tried to establish that Biden was linked to Communist China and plans to defund police based on George Floyd’s death and police brutality, which would thus directly affect the security of their daily lives. Somehow, Trump’s alleged Russian collusion and his disregard for military families and their contributions did little to dissuade his base. However, the Trump strategy of ‘othering’ fellow American citizens disappointed just enough independent voters to give Biden the edge.

Black Americans constitute 12% of the population in PA. Philadelphia, the most populated city in PA has about 1.5 million people, of which almost half are black, who has the power to swing the PA results to any direction they wish. Black voters in Philadelphia have various concerns like public housing and criminal justice reform. Democrats’ legacy over the past decades in not addressing public housing adequately as well as Biden’s strict stance on 1994 Crime Bill were hurdles among the black community to swing fully towards Democrats.

But Trump’s long history of not-so-subtle racist remarks and support for white supremacy stirred the black voters strongly enough to exercise their right to vote and change the political fortunes of Trump in the state. Philadelphia City Commissioners office data shows voter turnout in the city at 63.8% in the Nov 2020 elections, marginally ahead of Obama’s time (63.6%). Latest voter projections show that a large share of voter turnout is seen as black voters who supported Biden.

Another group with growing political influence in PA are Latinos, now who number more than half a million or about 7.8 % of the state's population. Most Latino voters in PA trace their origins to Puerto Rico and Mexicos. Trump’s alienation of Mexican immigrants by calling them ‘rapists’, the border wall and the recent family separation policy that separated 540 children from their parents at the border and consequent inability of officials to locate families tipped Pennsylvanian Latino voters towards Biden. Trump’s lack of support for Puerto Ricans during the earthquake didn’t play well with the voters either. A Mexican construction worker in Reading told me “That man is crazy. We cannot have him in the White House. So, I voted early for Biden”. Many Spanish speaking communities in Readingopenly announced their solidarity for Biden. At the other end, there were Hispanics who supported Trump based on Christian faith and other social issues, though this group of Latinos in Pennsylvania have not grown like in Southern states like Florida.

Another factor that may have influenced PA results is the disqualification of Howie Hawkins, the Green Party’s presidential nominee, owing to a PA court ruling on procedural lapses. In 2016, Jill Stein of the Green Party had gained about 49,000 votes in PA, which is more than Biden’s lead over Trump in 2020! It is plausible that the majority of likely Green Party voters eventually went with Biden.

The 2020 US election has been a rollercoaster ride for the Americans as well as the world. One thing I learnt from my time in Pennsylvania is that there is a wide disconnect between the voters at the grassroots level and the national politicians. If Pennsylvania has become a battleground state in the US presidential elections, it is because the majority of the population are in a vulnerable position and are seeking a leader who will meaningfully improve their living standards, access to health, housing, and security that affect their daily lives beyond the election cycle. They have suffered a steady multi-generational erosion in their living standards when the big coastal cities appear to have become richer and shinier. Many of them don’t care about big banner topics like climate change or America’s diminishing global prowess. They are more worried about protecting their livelihoods and preserving their way of life. The anger in many voters and the numbness among the non-partisan voters is because there have not been many proactive efforts to listen and understand them.

In 2016, many saw Trump, the political outsider, as the answer to their long list of grievances. This year, just enough of the earlier Trump backers were disappointed and went with Biden. Irrespective of their affiliations and how they voted, their anxieties are as yet unaddressed. With the right candidate, I can see the state easily flipping back to the Republicans in the next cycle if there is no visible improvement in people’s lives and if the frayed nerves are not calmed.

If President-Elect Biden and the Democrats wish to retain the support of the Appalachian State, they need to make it their mission to improve income mobility and racial disparity, as well as deliver a message of unity to its citizens. Fingers crossed that Pennsylvanian’s very own Joe Biden will be that new horizon of hope!

(The author is a Research Consultant focusing on Human rights issues. She is a Public Policy Graduate from Harvard Kennedy School and the winner of the Carr Center for Human Rights Policy Paper Prize in 2013.)