Police Deny UP Woman Threw 5 Children In River Due To Lack Of Food, Lockdown

Ram Badan Singh, Superintendent of Police, Bhadohi (UP) says the Gopiganj Police Station, under which the village falls, has lodged an FIR against the two reporters and action will be taken for spreading lies and false news. 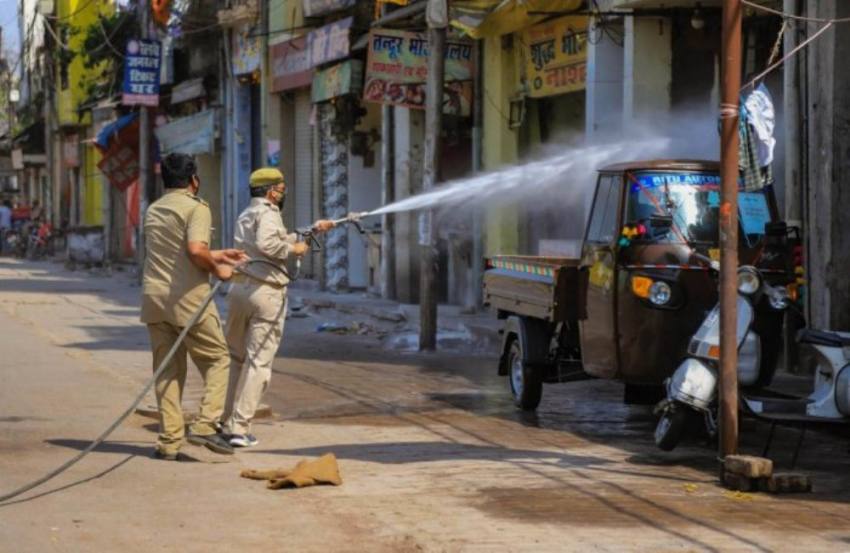 In this file photo, police in Uttar Pradesh sprays a goods carrier with disinfectants. (PTI)
Jeevan Prakash Sharma 2020-04-15T11:02:14+05:30 Police Deny UP Woman Threw 5 Children In River Due To Lack Of Food, Lockdown 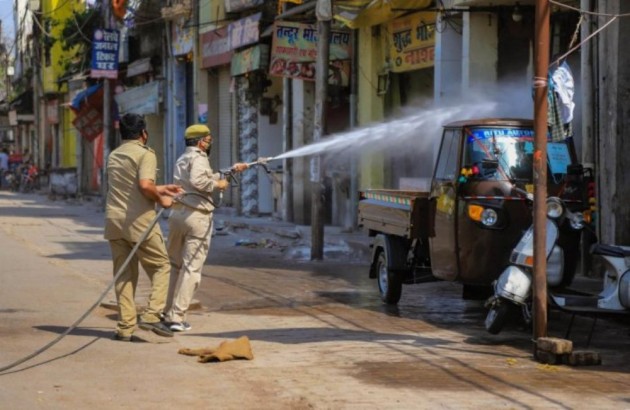 The Uttar Pradesh Police have named two journalists in an FIR following a news report claiming a woman threw his five children in a river and attempted suicide by jumping into in Bhadohi district. The report by news agency IANS also says the shortage of food due to the nationwide lockdown had prompted the woman to take the unfortunate step. The police investigation shows the long-standing family feud the only reason behind that woman did. Outlook had carried the report as part of an automated news feed.

The police alleged the facts of the case were distorted which could have incited people and created a law and order problem.

In an interview to Outlook, Ram Badan Singh, Superintendent of Police, Bhadohi (UP) says the Gopiganj Police Station, under which the village falls, has lodged an FIR against the two reporters and action will be taken for spreading lies and false news. Excerpts:

(1) Why did the woman throw her five children in the river and then attempted to drown herself?

A) There was never any doubt about the reason behind the crime since day one. The women committed the crime due to a long-standing fight with her husband on family issues. She was in a state of mental agony.

(2) So it was not a case of a shortage of food at home due to lockdown?

A - Not at all. She didn’t take such an extreme step just because she didn’t have anything to eat due to lockdown. There was no case of committing the crime due to starvation or any shortage of food at home. She had ample food to survive.

(3) Did the police recover the bodies of children?

A - We have been able to fish out four bodies. The dead body of the youngest one is still missing. We are trying to recover that too.

(4) It may not be a case of shortage of food as your investigation shows but did you try to find out what drove her to take such an extreme step?

A - Let me tell you that it was not for the first time that they fought. You should understand that no one takes such an extreme step due in a first-time fight. Their fight had nothing to do with the lockdown. Even in the past, they fought on several occasions. The stress building happened over a period of time. The husband was a drunkard. He used to beat her wife and the kids quite often. That’s why all the kids went along with the mother.

(5) We have been getting reports of a rise in the cases of marital discords because families are forced to stay under one roof. Couldn’t it be an increased level of stress because of the husband staying at home all the time due to lockdown? Or he didn’t get liquor due to lockdown?

A - That’s not the factor at all. He is a driver by profession. He was not at home. He had gone to Jharkhand in his vehicle for some work and had come back from there when they fought.

(6) So you don’t see any connection of the crime with the lockdown?

A - No, it was only a case of a family feud which drove the lady to do that. It has nothing to do with the lockdown.

(7) But why do you think a journalist made a deliberate attempt to misrepresent the fact? It could be a case of inadvertent error also while discharging the duty?

A - It is a matter of investigation. I have lodged an FIR. Now, once lockdown is over, we will consider other aspects of the matter.

A - It is because we want to take action against people who have spread lies and false news. We are busy in maintaining lockdown in the district at the moment. We will definitely take action.

(9) What was the impact of the news on the local people?

A - People were very upset due to false and baseless reporting. You can see on twitter how people have vented their anger.

(10) But did the ‘false’ reporting cause any law and order situation in your district?

A - No, it didn’t create any law and order situation. But as I said people were very upset against the journalist because they didn’t like the way matter was falsely reported. Had the journalist been caught in the village, people would have done anything. Nothing untoward happened because of the lockdown.

(11) Have you arrested the women? What about her husband?

A - Yes, she has been sent to jail. Her husband is at home.

(12) Why haven’t you taken any action against the husband for mentally agonising the woman leading to the crime?

A - He didn’t understand the degree of impact. He didn’t have any idea what steps his wife would take if he would pick a fight with her.