A notification issued by the Pakistan Electronic Media Regulatory Authority, reads, “In observance of solidarity with Kashmir, Eid ul Azha is being celebrated with simplicity as a religious event.."

Pakistan has decided to celebrate Eid with ‘simplicity’ by getting its television channels not to air any special programmes on the day, in a bid to express “solidarity” with Kashmiris.

A notification issued by the Pakistan Electronic Media Regulatory Authority (PEMRA), dated 10 August 2019, reads, “In observance of solidarity with Kashmir, Eid ul Azha is being celebrated with simplicity as a religious event. Therefore, it is requested that No Special Programmes (already recorded or planned live) be aired as Eid celebrations as the same may hurt sentiments of not only our nation but also the Kashmiri brethren”.

The notification also states that 14 August (Pakistan’s Independence Day) will be celebrated as a “Solidarity Day with brave Kashmiris”, and August 15 will be observed as “Black Day”. 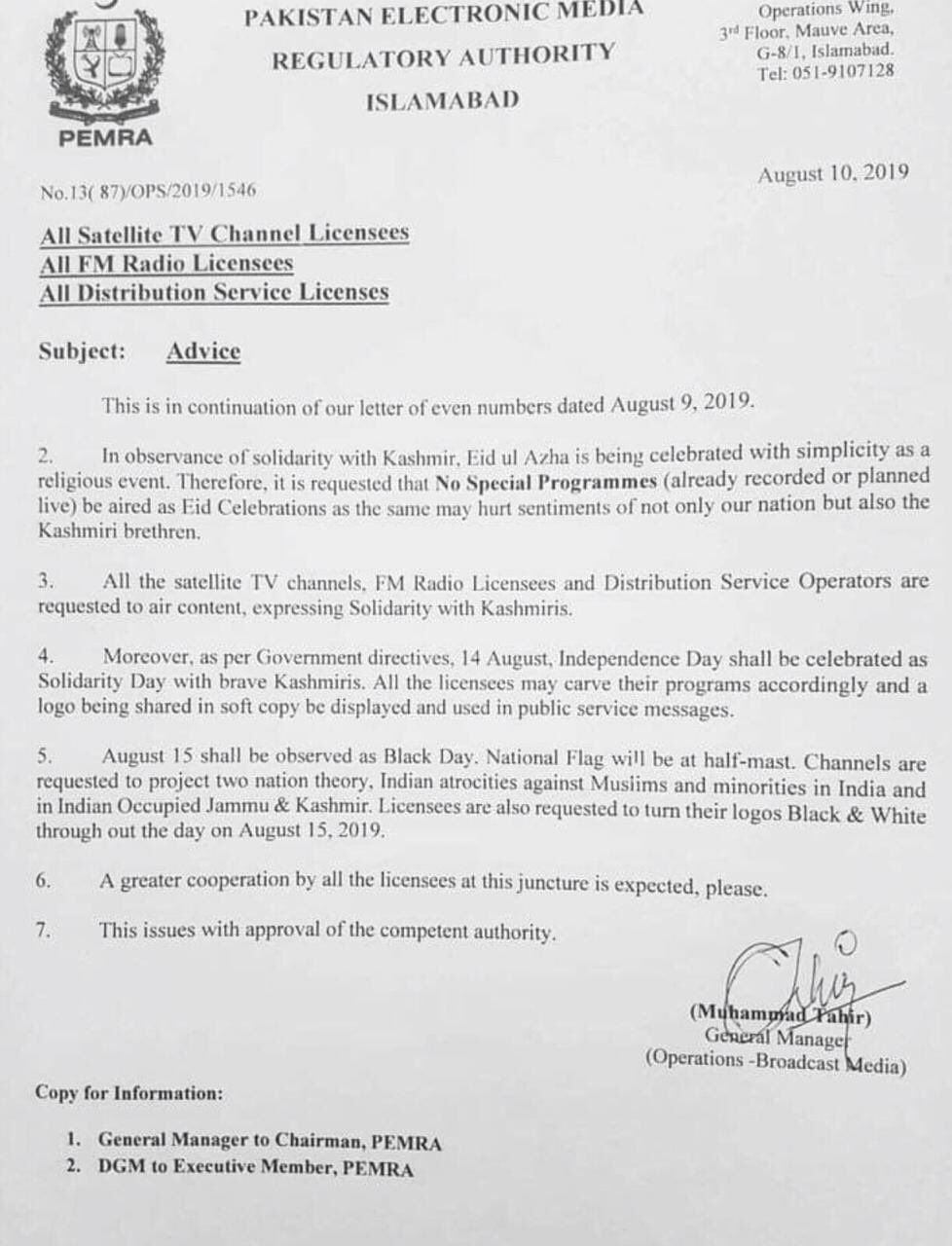 The notification comes in the wake of India’s decision to revoke Article 370 and Article 35A, which scrapped special status for Jammu and Kashmir, a move which drew a sharp reaction from Pakistan.

Pakistan downgraded its diplomatic ties and snapped trade relations with India, besides suspending the Samjhauta Express and Thar Express train services between the two countries.

The Ministry of External Affairs in New Delhi said on Friday it is time for Pakistan to accept reality and stop interfering in the internal matters of India.

"From their side, they would like to project a panic situation, the international community does not think there is a war-like situation. It is a ploy to deflect attention...It is time for Pakistan to see the new reality and stop interfering in the internal matters of India," it said.

Ahead of Eid-ul Azha, restrictions were eased in Kashmir allowing people to come out to shop, while the administration said it was taking steps to facilitate availability of food and other items and offering of prayers in mosques on Monday.

Meanwhile, Pakistan Prime Minister Imran Khan said Sunday on Twitter that India's move was an attempt to change the demographics of Kashmir by introducing Hindu supremacy to the Muslim-majority area and urged the international community to take notice.