'I have filed the petition in my personal capacity, not on behalf of the Congress. It has nothing do with politics and is based purely on humanitarian grounds,' Ghulam Nabi Azad said. 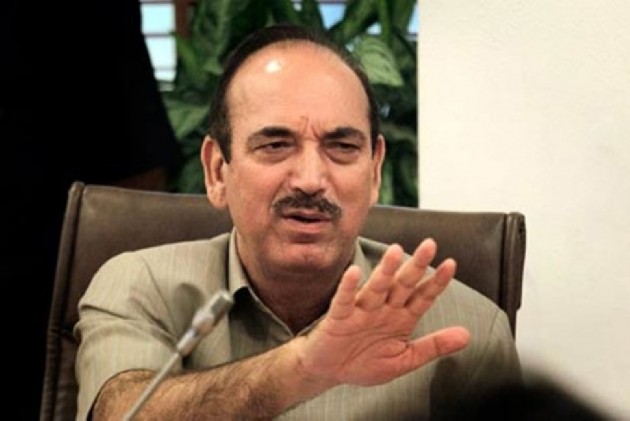 Senior Congress leader and former Jammu and Kashmir chief minister Ghulam Nabi Azad has moved the Supreme Court seeking permission to visit his home state to enquire about the well being of his family members.

Azad said he has filed the petition in his personal capacity and it is apolitical.

His plea is scheduled to be taken up by a bench of Chief Justice Ranjan Gogoi and Justices S A Bobde and S Abdul Nazeer on Monday.

The senior congress leader has also sought a nod from the top court to visit his family members and relatives.

He had tried to visit the state after the abrogation of Jammu and Kashmir's special status but was sent back from the airport by authorities.

On former Haryana chief minister's Bhupinder Singh Hooda statement supporting abrogation of provisions of Article 370 which was at variance with the party's stand, Azad said, "A law has been made. The matter is not in the hands of politicians any more. The Supreme Court will decide".

While the Congress had taken a strong position against the abrogation, Azad said the media should not analyse his petition pending before the top court.

"I have filed the petition in my personal capacity, not on behalf of the Congress. It has nothing do with politics and is based purely on humanitarian grounds. I tried thrice to go to my home state but was refused permission. Almost one-third of Kashmiri people are lakhs who do labour to earn their daily livelihood and nobody is bothered to know how are they surviving.

"I have expressed concern about the plight of those people on humanitarian basis, being a native, and as a member of Parliament from Jammu and Kashmir. It has been 42 days...What are they eating, drinking and how are they surviving, this is a question to the state government, the central government and to the media as well," he said.

In his petition before the top court, he has also sought permission to check on social conditions in the state after the clampdown imposed by the authorities in the aftermath of the revocation of provisions of Article 370.

Several opposition leaders, including Congress leader Rahul Gandhi, had sought to visit Jammu and Kashmir, but were not allowed to do so and were sent back from the airport itself.

CPI(M) leader Sitaram Yechury had moved the apex court to see his ailing party colleague Mohammed Yousuf Tarigami, which allowed him to pay a visit but with certain conditions.

The top court had on September 5, allowed former Jammu and Kashmir chief minister Mehbooba Mufti's daughter Iltija to meet her in Kashmir, where she is under detention following the revocation of the state's special status.

The apex court had allowed Iltija to meet her mother in private but said that as far as moving around in other parts of Srinagar goes, she can do so subject to the permission from district authorities.