Gazipur Cop Killing A Result Of UP CM Adityanath's 'Thok Do' Attitude: Akhilesh

Police constable Suresh Vats, 48, was killed Saturday in Ghazipur when protesters hurled stones at vehicles returning from the venue of a public meeting addressed by Prime Minister Narendra Modi. 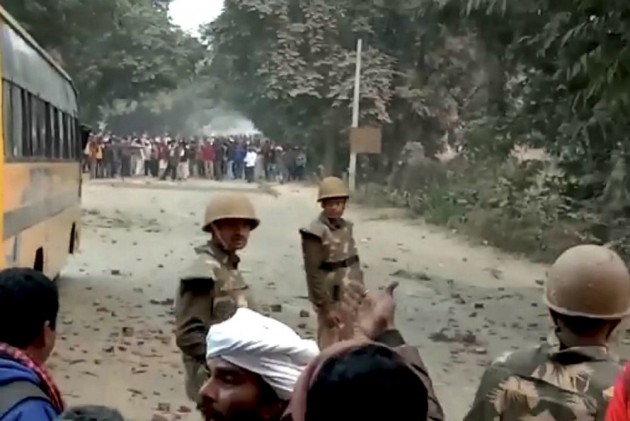 Nineteen people have been arrested and several others detained in connection with the killing of a police constable in Uttar Pradesh's Ghazipur district, a senior police official said on Sunday.

"The death of head constable Suresh Pratap Singh Vats in Ghazipur in stone pelting is extremely tragic. So far 19 accused in 3 cases have been arrested, which include 11 in the case of murder. Strict action will be taken against those involved in violence under stringent sections of law (sic)," the DGP said in a tweet.

Reacting to the incident Samajwadi Party chief Akhilesh Yadav said: "The incident happened as UP Chief Minister keeps on saying -- 'thok do' (shoot them)...Sometimes police doesn't understand whom to shoot and sometimes people fail to know whom to shoot".

Meanwhile, the Congress on slammed the Uttar Pradesh government over the death of a police constable during stone-pelting by a mob, alleging that in Yogi Adityanath's "jungle rule" neither the people are safe, nor the police.

Police-constable Suresh Vats, 48, was killed Saturday in Ghazipur when protesters hurled stones at vehicles returning from the venue of a public meeting addressed by Prime Minister Narendra Modi.

Reacting to the incident, Congress' chief spokesperson Randeep Surjewala claimed, "In Adityanath's grand jungle rule, neither the people were safe, nor the police."

Before this, a mob had killed police inspector Subodh Kumar Singh in Bulandshahr which the chief minister had described as an accident, he said.

"Democracy in BJP rule=mobocracy," he tweeted.

Superintendent of Police (Ghazipur) Yashveer Singh on Saturday said the protesters were workers from the Rashtriya Nishad Party who were prevented by the administration and the police from going to the rally venue.

“When the Prime Minister had left Ghazipur, the party workers blocked traffic at various places and started pelting stones on the vehicles returning from the programme venue," he told PTI.

However, Nishad Party president Sanjay Nishad denied any involvement of his party workers in the matter, adding that BJP is plotting against his party.

Sanjay Nishad told ANI: "We need proper investigation in the case. It is BJP who is plotting against us. Not our party workers but BJP workers threw stones at people. We're taking our demand of reservation ahead in a democratic manner. If my party workers are found guilty, we will take strict action against them. It is easy to blame the weak as Yogi ji and Modi ji are in power."

Constable Suresh Vats (48) from Karimuddinpur police station was hit on the head by a stone when he went to end a traffic jam caused by the protests.

"He was immediately taken to hospital where he succumbed to his injuries,” the SP said.

He said about 15 party workers were detained. The police are trying to identify other protesters through the video footage of the incident.

The constable was from Raniganj in Pratapgarh district.

Chief Minister Yogi Adityanath announced a compensation of Rs 40 lakh for the wife of the dead constable and Rs 10 lakh for his parents, the state government said.

He also directed the district magistrate and the superintendent of police to take strict action against unruly elements and immediately arrest them.

The death comes less than a month after the killing of Inspector Subodh Kumar Singh, who was shot dead during mob violence in Bulandshahr district over alleged cow slaughter.

The man who allegedly shot the Bulandshahr inspector was arrested this week.

Modi had addressed a public meeting after laying the foundation stone for a medical college and releasing a postal stamp on Maharaj Suheldev.

He had left for Varanasi when the violence in Ghazipur took place.