Home  »  Website  »  National  »  For A Change, Shiv Sena Says They Will Act As Bridge Between Kashmir And Jammu

Shiv Sena General Secretary Manish Sahni said they would be acting as a bridge between Kashmir region and Jammu. 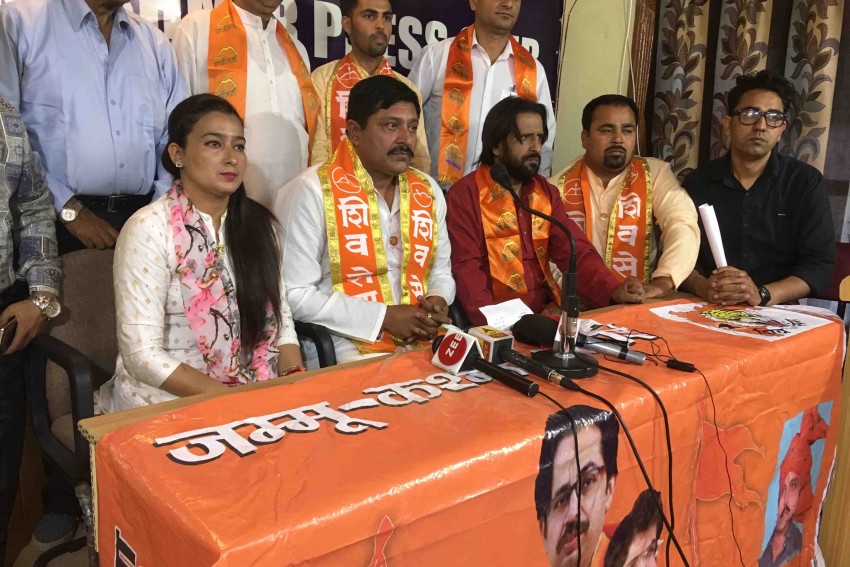 Shiv Sena leaders holding their first ever press conference in Srinagar
Naseer Ganai May 17, 2019 00:00 IST For A Change, Shiv Sena Says They Will Act As Bridge Between Kashmir And Jammu 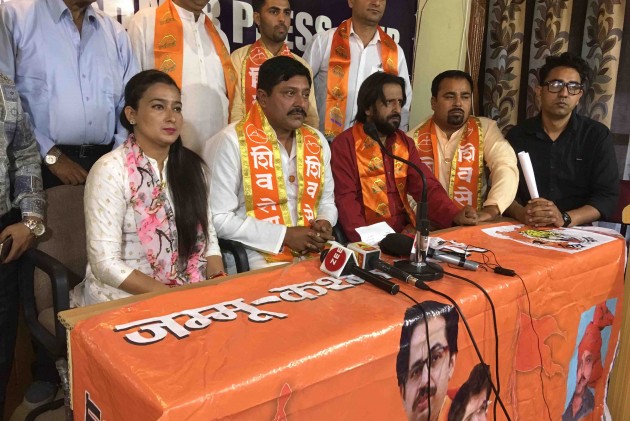 Known for attacking and protesting against Kashmiri leaders in Jammu, the Shiv Sena said they have come to the valley as “peace ambassadors.” On Thursday evening, Sena leaders held their first ever press conference in Srinagar and said they want to promote regional harmony between Jammu and Kashmir regions.

Shiv Sena General Secretary Manish Sahni said they would be acting as a bridge between Kashmir region and Jammu. Flanked by Shiv Sena leaders Meenakshi Chibber, Khalid Bhat and others, Sahni said political parties were misleading people on the issue of Article 370 and Article 35A. He said these were constitutional issues and they would be resolved by the Jammu and Kashmir Assembly. He, however, said they were for abrogation of both the Articles but they want that the constitutional bodies should take a call on these legal issues.

The Sena leader said that Jammu, Kashmir and Ladakh comprise one state and the three regions should come together. The party leaders insisted that their only motive for visiting the Valley was to foster friendship between Kashmir region and Jammu. They claimed that other political parties are pitching the two regions against each other.

To a question that Shiv Sena has a history of attacking Kashmiri mainstream and separatist leaders in Jammu, they said “we have come to forge friendship now”.  Over the years the Sena has attacked Kashmiri leaders, including late Abdul Gani Lone, Yasin Malik, Engineer Rashid and others. In 2002 Shiv Sena leaders assaulted late Abdul Gani Lone when he was addressing a press conference in a Jammu hotel. In the same year Shiv Sena workers barged into a hospital where JKLF leader Yasin Malik was admitted. They manhandled and abused him.  The Sena stages protests whenever separatist leaders visit Jammu. Four years ago they threw ink on a legislator, Engineer Rashid.

The Sena leaders said their intention behind visiting the Valley was also to express sympathy with the family of a minor girl, who was allegedly raped in Bandipora. They said the accused involved in the crime should be hanged. When it was pointed out that during the rape and murder of an eight-year girl in Kathua area of Jammu last year they didn’t raise any voice against the alleged rapists, Sena leaders said that at the time Kashmiri political parties had raised the issue. “The way Kashmiri political parties had come to express sympathy with the victim last year, the same way we have come here to express solidarity with the victim’s family,” Sahni said.

About the killing of a civilian, Naeem Ahmad Shah, 50, allegedly by cow vigilantes in Bhaderwah area of Jammu early Thursday morning, the Sena leader said he did not know the facts of the case. He said the case should be dealt with according to law.

Sena leader from Kashmir, Khaliq Bhat, earlier said he was hopeful of getting some votes from Srinagar constituency. Bhat, who was fielded by the Shiv Sena against the National Conference candidate Dr. Farooq Abdullah from Srinagar constituency in the current parliamentary polls, said he campaigned peacefully without any problem. “No one created any issue for me,” he told Outlook. Bhat who hails from Chadura area of Budgam district, said he was earlier with the Bahujan Samaj Party (BSP) and joined Shiv Sena a few years ago. He said he has a large number of members but he wouldn’t disclose their names due to security reasons.

Sahni said the Shiv Sena believes in pluralism. He cited the example of actor Nawazuddin Siddiqui playing Bal Thackeray as part of Sena’s pluralism. “You should watch this film,” Sahni said.