Home  »  Website  »  National  »  Coronavirus Outbreak: What Is Tablighi Jamaat And Why It Is Under Spotlight

Twenty-four more people tested positive in Delhi on Tuesday and it was learned that they had attended the religious congregation of Tablighi Jamaat earlier this month. 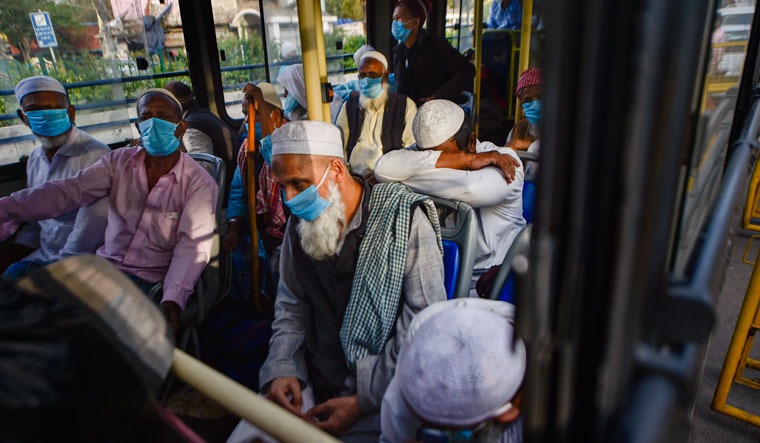 COVID-19 suspects from Nizamuddin Dargah area, are being taken to quarantine facility in Delhi.
PTI Photo
Outlook Web Bureau 2020-03-31T12:53:02+05:30 Coronavirus Outbreak: What Is Tablighi Jamaat And Why It Is Under Spotlight

The sudden spike in the number of Coronavirus cases in Delhi, after dozens of people who had attended a congregation in Nizamuddin Markaz in Delhi, has brought Tablighi Jamaat, headquartered at Nizamuddin's Markaz in the national capital, under spotlight.

The outbreak was discovered on Monday in Delhi as it emerged that several Tablighi members hid their travel history to foreign countries and a large congregation was held on March 13-5 at a markaz in Nizamuddin. The area has been sealed and hundreds of those present whisked away to hospitals.

More than 2,000 delegates, including from Malaysia, Indonesia, Saudi Arabia and Kyrgyzstan, attended the congregation of Tablighi Jamaat.

As many as 1,400 people continued to stay at the Tabligh-e-Jamaat's "Markaz" in Delhi's Nizamuddin West even after the event.

At least 24 more people tested positive in Delhi on Tuesday and it was learned that they had also attended the religious congregation of Tablighi Jamaat. Nine people who have died so far due to the Coronavirus had a connection with the Tablighi Jamaat event.

What is Tablighi Jamaat?

Tablighi Jamaat means a group of preachers. The idea was floated by Islamic scholar Maulana Muhammad Ilyas in 1926 in then Mewat province.

Unlike some other Muslim Jamaats, Tablighi Jamaat works only among Muslims. It is believed to have millions of active members in more than 150 countries. They invite the Muslim community to adhere to the basic tenets of Islam.

The Tablighi network is strong across the Indian sub-continent and people from various walks of life are associated with the religious organisation.

Tablighi bands of preachers operate from mosques. Announcements that 'Jamaat' has come from other cities and countries are common in the mosques under the control of the organisation. They do 'gasht' or go around in the neighbourhood, interact with Muslims, invite them to 'namaz' and 'ijtema' or seminars at the mosque.

The preachers, who usually venture out on 40-day mission, stay in mosques. With congregational prayers restricted in the wake of lockdown, the preachers have vacated the mosques.

Interestingly, the surge in Kashmir's Coronavirus cases has also a Tablighi Jamaat connection.

One of the Coronavirus positive cases in Kashmir had reportedly attended the congregation at Nizammudin's markaz. Later, when he returned to Kashmir, he held congregations in Sopore, Bandipora, Samba and Jammu districts during which he is reported to have met dozens of people in various places, including Srinagar.

All family members of this COVID-19 victim have tested negative, but some of his contacts have tested positive and are being treated in Srinagar hospitals.