While parties such as AAP and TRS share a good rapport with TMC chief Mamata Banerjee, Mayawati is likely to pose a challenge for her leadership ambitions. 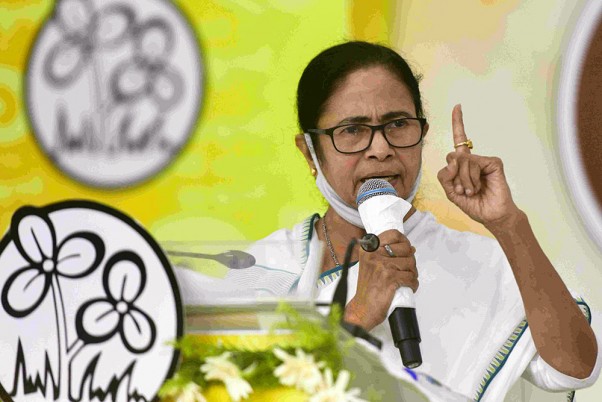 After conquering West Bengal, Chief Minister Mamata Banerjee now seems to have her eye set on national politics. Her visit to Delhi, which began on Tuesday, is perceived to be an effort to spread her party’s footprint outside the state.

After her spectacular victory in the Assembly election, the Trinamool Chief has been sending clear signals to act as the fulcrum of opposition parties in taking on the BJP juggernaut.

It is believed that political strategist Prashant Kishor is also playing a significant role as her emissary to various political parties in formulating strategies to counter BJP at the national and state levels. “There is no doubt that the poll victory has given Mamata a prominent position among the opposition parties,” says Praveen Rai of Centre For the Study of Developing Societies (CSDS).

Mamata Banerjee's Speech To Be Broadcast On Large Screens Across Tripura

Last week, Banerjee made a significant call to all opposition parties to come together to defeat the BJP in the 2024 Lok Sabha elections. However, analysts point out that the road ahead may not be smooth for the mercurial leader to bring together the main opposition party Congress along with many regional players. Mamata has made futile attempts in the past too, sans Congress, they point out. In 2019, Mamata had successfully organized a massive rally bringing together most of the opposition leaders barring Congress ahead of the Lok Sabha elections.

However, this time, TMC seems to have overcome a major hurdle by extending an olive branch to Congress. As Mamata met Congress leaders Kamal Nath and Anand Sharma on Tuesday, both parties have taken a step forward in the direction of opposition unity, say observers. Mamata is also expected to meet Sonia Gandhi this week.

The signs of a thaw were apparent after Congress tweeted against the alleged snooping on the chief minister’s nephew and TMC MP Abhishek Banerjee.

While Congress seems to have taken a flexible approach on Mamata taking a bigger role in cobbling together opposition parties, Praveen Rai believes that she has many challenges ahead. The main barrier for Mamata’s national ambitions would be language, he says.  “To present herself as a national leader, Mamata has to make an impact. She has to connect with the voters in the heartland and language will play an important role here,” he says.

Analysts also, say that the TMC’s national ambition is loud and clear as Prashant Kishor’ s I- PAC team is already in Tripura doing the groundwork for the 2023 Assembly polls. The TMC also has plans to contest in the upcoming Uttar Pradesh Assembly elections.

Another important question is whether Mamata will be able to draw together regional players such as Bahujan Samaj Party (BSP), Samajwadi Party (SP), and AAP?

While many regional parties are opposed to the idea of Congress leading the pack, parties such as Aam Admi Party (AAP) and TRS are likely to accept Manta’s leadership, say commentators.

As Delhi Chief Minister Arvind Kejriwal shares a good rapport with the Trinamool chief, it wouldn’t be a daunting task for Mamata, they point out, adding that the Congress need to put up a good position in the upcoming state elections to have a formidable position in the alliance.

However, the troubled relationship between BSP chief Mayawati and Mamata is an open secret. Both the leaders have shown interest in the PM post earlier. Given the fact that the BSP has entered an alliance with Shiromani Akali Dal (SAD) in the upcoming Punjab elections, political equations will only get complicated in the coming days, they say.