Akhilesh Yadav is in Prayagraj to visit the family of CRPF personnel Mahesh Yadav, who was killed in the Pulwama attack, and Samajwadi Party youth wing members injured in clashes with police during a protest against their chief being stopped from visiting the city on February 12. 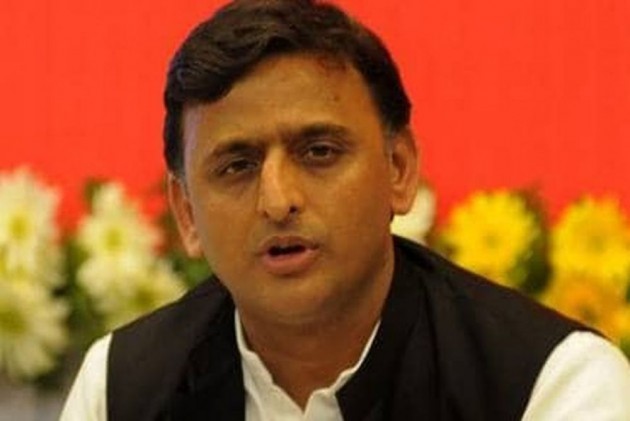 SP president Akhilesh Yadav on Saturday said in Prayagraj that the BJP government was functioning in an "autocratic" manner. His comment comes days after being prevented by the Uttar Pradesh government from flying to the city on grounds of law and order.

The former chief minister is in Prayagraj to visit the family of CRPF personnel Mahesh Yadav, who was killed in the Pulwama attack, and Samajwadi Party youth wing members injured in clashes with police during a protest against their chief being stopped from visiting the city on February 12.

Speaking to PTI, the SP leader also asked students to become "booth soldiers" and give a befitting reply to the BJP in the Lok Sabha polls.

"Now it's your (students) responsibility to give a befitting reply to the BJP government, which is functioning in an autocratic manner. You all become 'booth soldiers' and ensure BJP's defeat," Yadav said.

When asked about him being denied permission to visit Prayagraj  on February 12, he said, "They didn't have a reason to stop me. They could not produce a valid reason while preventing me to board the flight to attend a students' programme."

"I abide by the law, I didn't go...But if the government is so powerful, why couldn't it stop those businessmen who fled abroad with our money. Does it mean they fled with their (government's) help?" Yadav told PTI.

Those who fled the country were BJP's "friends" and they helped it in "marketing and branding", he alleged, adding that the BJP is fighting a "political battle" by misusing the government machinery.

The SP leader had claimed that he was stopped at the Chaudhary Charan Singh International Airport in Lucknow on February 12 by police to prevent him from visiting Prayagraj to attend a programme at Allahabad University.

"The government is afraid of oath ceremony of a student leader and is stopping me at the airport to prevent me from visiting Allahabad," Akhilesh had said.

Scores of students of the SP youth wing were injured in lathicharge here in which party MP Dharmendra Yadav was also injured.