Captain Virat Kohli is not for making frequent changes in his team, but with looming rain threat, he might be forced to field an unexpected player when India take on arch-rivals Pakistan in the blockbuster clash of the ICC Cricket World Cup 2019 on Sunday 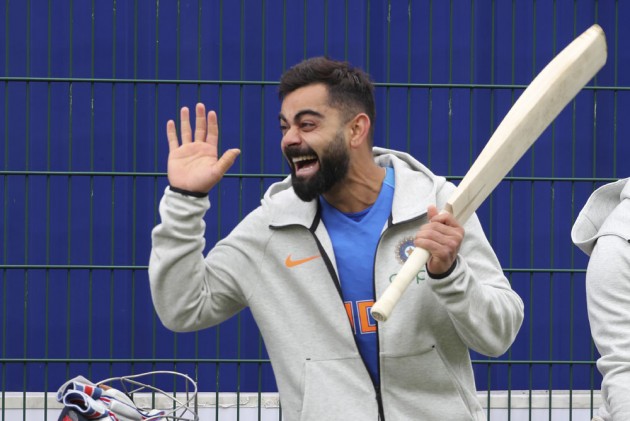 Kohli is not for making frequent changes in his team. But with looming rain threat, he might be forced to field an unexpected player. While he did not spell out the changes, there is a strong possibility that Dinesh Karthik will be preferred over Vijay Shankar if it's a less than 35 overs game per side.

It's true that Karthik, who was named in India's 15-member squad for the World Cup as wicket-keeper MS Dhoni's back-up, remains a peripheral player even as India continue to look for a substitute for injured Shikhar Dhawan.

The veteran Tamil Nadu player is a capable player who can finish games and is known for having a cool head. If it becomes a short game, Karthik is an obvious choice. And Karthik can be a weapon for India, if ever the match turns out to be a hit out, a la T20.

But Vijay Shankar, with his better technique, can pip Karthik if it's a 40-over-plus per side game.

"If the length of the game is going to be full and we expect the game to be 50 overs for both sides, then we'll probably think of another combination, but we'll have to be flexible. We'll have to see how the conditions are on the match day.

Hinting at a possible shake-up in the playing XI, Kohli said that all players are ready for action.

"I think all players are in a zone to be ready to play, so that helps in selecting the combination that you need to, depending on what conditions you're going to face,” the skipper said.

Another player who's likely to get a look in is Mohammed Shami.

"Look, we have to be flexible. We can't be rigid in our approach because, if the conditions are very different from what we played in the last game, then we'll have to think of different combinations. If pace becomes a more important option, then we'll look to explore that," Kohli dropped a hint on the inclusion of Shami.

Since Pakistan batsmen are capable of handling spin and three left-handers are likely to feature in their top-order (Fakhar Zaman, Imam ul Haq and Haris Sohail for Asif Ali), Kuldeep Yadav may make way for Shami in overcast conditions.

However, Kohli is not entirely against the idea of fielding two spinners although Yuzvendra Chahal is a sure-shot entry.

And even Ravindra Jadeja's restrictive bowling can also be a good option.

"The conditions and the length of the game will obviously make us think about a few combinations that we could potentially go in with," Kohli said on the eve of the match.

"The kind of spinners and the kind of bowlers that we have in our team, it's difficult for any team to just come out and attack these guys straight away. There's a certain level of risk involved as well," he sounded a warning for the opposition.

The skipper said that the decision will be based more on his side's comfort rather than looking at the opposition.

There is not enough moisture in the pitch according to Arthur which might prompt them not to play four pacers.

"We looked at the wicket yesterday, and the wicket was not like Taunton. Taunton was green and moist. You would be silly not to have played four quick bowlers in Taunton. Australia did exactly the same as us. That was a no brainer.”

But things are different at Old Trafford, reckons Arthur which might force them to do a bit of tinkering.

"Looking at this wicket, I'm not 100 percent sure there's a massive amount of moisture. The wicket is certainly a lot browner than Taunton. So those things will come into the equation in terms of our thinking."