Astronomers thought jet facing away from Earth (left in this illustration) could explain the low emission of energy observed in the violent collapse of binary neutron star. But a new study says hidden or 'choked' jet (white) powering a radio-emitting 'cocoon' (pink) is the best explanation for the radio waves. 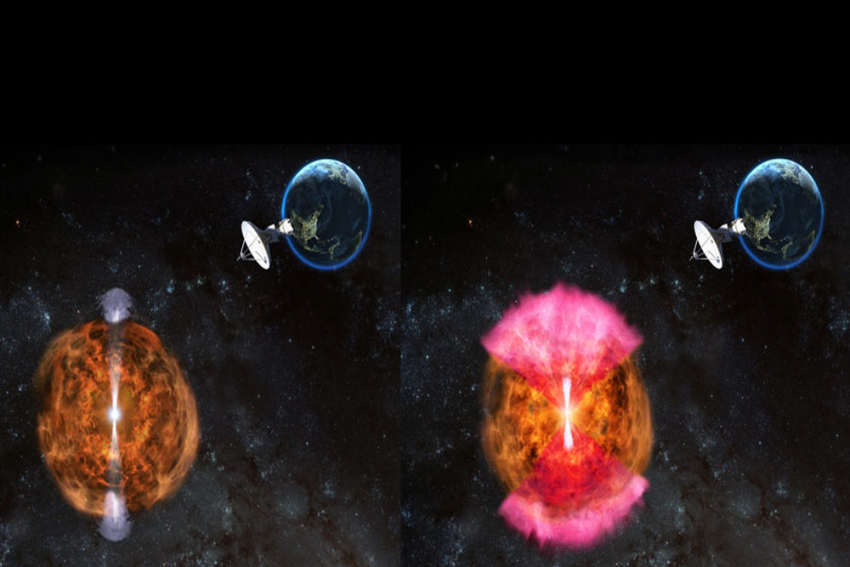 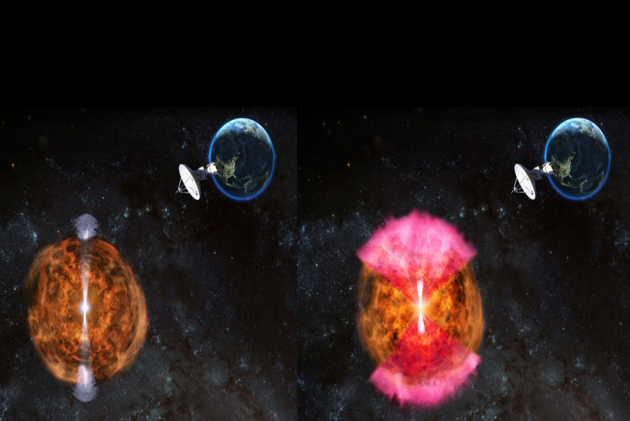 The enigma of why the merger of two neutron stars resulting in a kilonova explosion was not as bright as it should have been, has been solved by an international team of astronomers using crucial data from the Indian radio telescope, the Giant Meterwave Radio Telescope (GMRT) near Pune.

The cataclysmic collision of two neutron stars results in a spectacular explosion called kilonova. It is an explosion thousand times stronger than a typical stellar blow-up called a nova. The merger created gravitational waves, the kilonova explosion and outbursts of gamma rays, X-rays, and visible light. Astronomers were able to see for the first time a gravitational wave source with both gravitational waves and electromagnetic waves. The high pressure and temperature of the kilonova resulted in the synthesis of heavy elements like uranium and gold, whose subsequent decay led to the emission of ultraviolet, optical and near-infrared light. This event, named GW170817, solved many puzzles in astronomy -how heavy elements like gold, platinum and uranium are synthesised; is the speed of gravitational waves different from the speed of light and are the puzzling powerful short gamma-ray burst arising from neutron star mergers.

However, there was a mystery. When a pair of super-dense neutron stars collided in a kilonova explosion, bursts of bright flashes of gamma rays - short gamma-ray burst or SGRB - are expected. However, gamma-ray signals detected from the GW170817 were 10000 times less bright than those seen in other detected short gamma-ray bursts. Moreover, X-rays and radio waves from the event were detected only after sixteen days following the blast. More surprisingly, radio and x rays were brightening over time instead of fading away.

This is the puzzle that scientists have now explained in a research paper published in journal Nature on Wednesday.

Neutron stars are like a lighthouse, rotating and radiating a beam of energy along a path. If the jets of high-speed radiation from the blast were not aimed directly at the Earth but were inclined off-axis slightly, then only the edge of the beam would graze the Earth resulting in diminished energy than expected. Alternatively, the collision of binary stars could have resulted in the ejection of energetic debris that formed a cocoon-like envelope around the neutron star merger. This cocoon of material would have slowly expanded, choking the initially produced jets, thus resulting in diminished gamma rays. Part of the energy of the blast could be absorbed by the ‘cocoon’, reducing the amount of energy entering into space.

Using GMRT at Pune, along with Very Large Array (VLA) of the USA and Australia Telescope Compact Array (ATCA), Kunal Mooley of California Institute of Technology and colleagues collected data to examine which of these two explanations is correct. “The emission could have been produced by a powerful jet of radiation being launched during the merger and directed away from our line of sight; however, data collected by us for 93 days after the merger indicates that the cocoon model best fits the observations”, says Mooley.

The first clue that something is amiss with the off-axis explanation came when the radio emission from the event steadily gained strength. If the direction of the beam was pointed away from the Earth, then as time went by, the signals should be getting weaker and not stronger. The model of the beam of radiation from the neutron star merger pointing away from Earth is hence not sustainable. This can explain the low gamma-ray emission but not the brightening of low-frequency radio waves observed in the event. Mooley says, “while we cannot rule out the existence of a jet pointing elsewhere, the observed gamma-rays could not have originated from such a jet.”

The timing and strength of the radio and gamma rays from the initial neutron-star collision give a clue to the subsequent events unfolding. The light curve of the radio waves from the event indicated outflow at eighty percent of the speed of light expanding away from the centre of the merger event. “The low electromagnetic energy of the merger event energy could be explained by the cocoon model since jet gave away much of its energy to the neutron-rich cocoon surrounding it”, Dr.Poonam Chandra, a scientist at the National Centre for Radio Astrophysics (NCRA) and one of the members of the research team, told India Science Wire.

If it was the cocoon that was emitting the radio waves, then Mooley and his colleagues predicted that X rays should also be shining. NASA's Chandra X-ray Observatory observed the event on December 2 and again on December 6. The X-ray emission had indeed brightened as predicted by the team confirming once again their conclusion.

“The Indian radio telescope GMRT played a crucial role in resolving this enigma”, said Poonam Chandra, who is a recipient of Swarna Jayanti Fellowship of the Department of Science and Technology (DST).

While VLA, ATCA and GMRT, all radio telescopes followed the event in radio bands, GMRT observations have the unique low-frequency coverage at 610 MHz, unavailable at VLA and ATCA. “This is important because low-frequency emission is absorbed by the surrounding material for a longer time. Since absorption depends upon the density of the absorbing medium, these observations uniquely allow us to estimate the density surrounding the binary neutron star merger event. This is crucial to conclusively understand the nature of the source,’’ she explained.

The study presents an exciting picture of what occurred when the two neutron stars collapsed violently, into a remnant, possibly a black hole. The kilonova explosion first set off a spherical slowly expanding envelope of ejecta into space. The rapidly-spinning merger event also launched a pair of high-speed jets of material moving close to the speed of light, flowing outwards from its poles. This jet could not flow into space but had to encounter the ejecta from earlier. Impacted by the high-speed jet, a cocoon of material then breaks away from this slower-moving ejected material, resulting in the brightening of radio and x rays emitted by the event. The authors estimate that “most of the jet energy is transferred to the cocoon resulting in the observed gamma-rays, X-rays and radio emissions." The study not only explains this event but also opens up possibility studying many more such collisions.

The research team included over 25 astronomers across the world including Poonam Chandra (NCRA) and Varun Bhalerao (IIT Bombay), Kishalay De, Mansi Kasliwal and Shri Kulkarni from Caltech. This reflects how Indian science is becoming part of international efforts in solving fundamental mysteries of the universe. (India Science Wire)