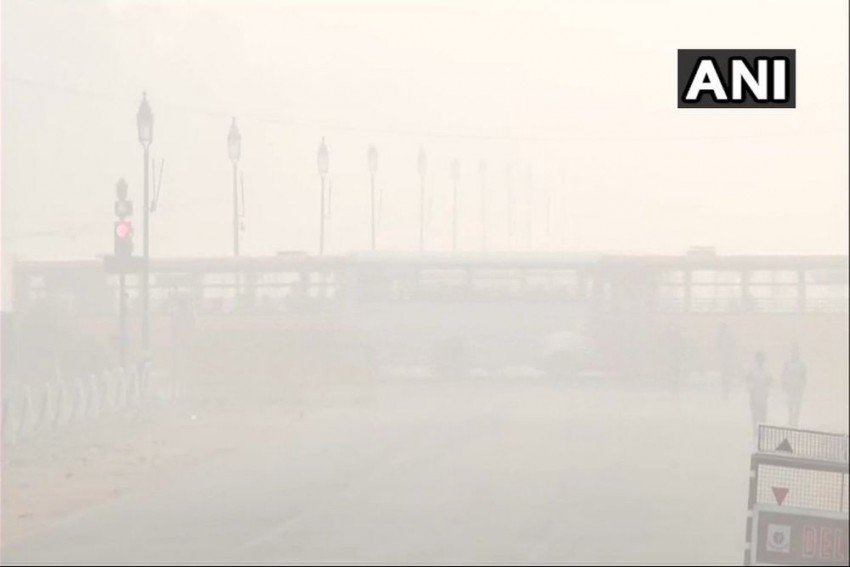 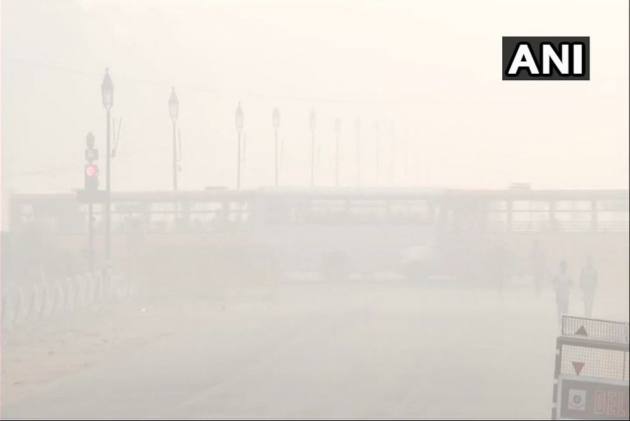 Delhi's air quality remained in the 'severe' category on Friday despite a slow but "significant" improvement in pollution levels  with the AAP government restricting the entry of heavy and medium goods vehicles into the national capital as an emergency measure.

The Indian Institute of Tropical Meteorology (IITM) said stubble burning in neighbouring states on Thursday was the "largest-ever recorded" for this year with 2,100 fire counts, which might lead to a further deterioration of the already "severe" air quality of the national capital.

Delhi: According to the Air Quality Index (AQI) data, major pollutant PM 2.5 is at 407 (severe) and PM 10 at 277 (Moderate), in Lodhi Road area; #Visuals of smog from Delhi's Rajpath area pic.twitter.com/ogfUpxKVoj

Over 400 heavy and medium goods vehicles were returned from Delhi's borders after the city government's transport department banned their entry from 11 pm on Thursday night to 11 pm on November 11 in the wake of the worsening air quality.

Government-run agency SAFAR said that the city's air quality would remain in the severe category till Saturday, as the already toxic situation caused by smoke from fireworks is likely to aggravate further due to intensified stubble burning in neighbouring states.

Police said it can only take legal action against the violators of the Supreme Court order "but at the end of the day, it is also the responsibility of the public to follow the order".

Meanwhile, Delhi Environment Minister Imran Hussain met with ministry officials on Friday and held discussions on the deteriorating air quality in the national capital which slipped to the "severe plus emergency" category after Diwali.

Delhi's air quality on Thursday went off the charts to the "severe plus emergency" category. The city recorded the overall air quality index (AQI) of 642, according to System of Air Quality and Weather Forecasting And Research (SAFAR).

It said the city's air quality has "improved significantly" since Thursday, but the recovery was slow due to low surface wind speed.

The AQI was recorded in the severe category at 453 on Friday, according to data from the Central Pollution Control Board (CPCB).

On Friday, the PM2.5 (particles in the air with a diameter of less than 2.5 micrometres) level was recorded at 303 µgm-3, five times the permissable limits.

The PM10 (particles in the air with a diameter of less than 10 micrometres) level was recorded at 440 µgm-3, four times the permissable limits, according to SAFAR.

AQI above 500 falls in the "severe-plus emergency" category. SAFAR said, "As per satellite images, heavy fire counts were recorded in the last 24 hour and the latest SAFAR model results show a movement of cold front carrying heavy air mass towards Delhi region."

Elaborating on it, the weather forecast system said the air in the surrounding stubble-burning areas is already heavy due to increased moisture and pollutants.This heavy air will travel towards Delhi, where a similar situations exists, in the next 24 hours. This combined effect might add to the pollution woes.

"There is a possibility that the wind may pick up at the upper level, late in the night and push the level of pollution and keep it in severe zone tomorrow with intensified fog which will further trap the pollutants," it said.

Meanwhile elaborating about stubble burning and fire counts, IITM said,"It was the largest-ever recorded for this year. It was around four times higher than Wednesday," IITM said. "The PM2.5 concentration is likely to increase again from Friday afternoon and may remain severe or severe-plus in Delhi-NCR till Sunday," it said.

Data provided by Punjab shows a drop of 37,602 cases of paddy stubble burning between 2016 and 2017. “We are confident that there will be a considerable fall in numbers this year,” says an agriculture department officer.

The entry of heavy and medium goods vehicles into the national capital has already been banned for three days beginning 11 pm on Thursday night as a measure to check air pollution in Delhi.

According to Alok Kumar, joint commissioner of police (Traffic), 1,008 vehicles were allowed in the national capital between 11 pm on Thursday and 6 am on Friday as they were carrying essential goods. As many as 445 vehicles were returned from Delhi's borders, he added.

Another officer said many trucks did not enter Delhi either by choice or because they were returned by police in neighbouring districts.

The transport department had issued a notification regarding the ban. It has also appealed to private diesel vehicle owners to avoid using their vehicles during the period.