Top seed Medvedev powered his way into the Miami Open quarter-finals, along with Stefanos Tsitsipas and Andrey Rublev on Tuesday. 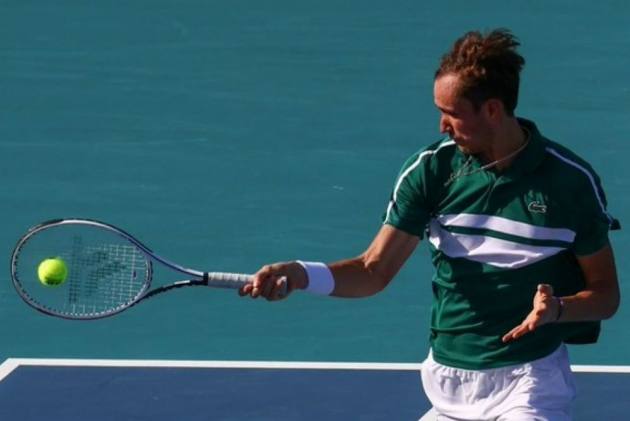 Second seed Stefanos Tsitsipas won in straight sets against 24th seed Lorenzo Sonego, although the second went to a tie-break which the Greek dominated.

World number two Medvedev was too good for Tiafoe in a 6-4 6-3 victory.

Medvedev improved his 2021 record to 17-2, sending down 11 aces with a dominant first-serve display while taking three of his four break points.

"It was definitely a tough match," the Russian said in his post-match on-court interview. "I am just looking forward to tomorrow. Roberto is a hell of a player.

"I feel like sometimes, when I have practised with him and played against him, that his ranking should be higher. There are reasons why it is not and I am going to try to do something with it tomorrow."

The Greek world number five defeated Sonego 6-2 7-6 (7-2) with a clinical performance to keep alive his dream of a maiden ATP Masters title.

Tsitsipas won in just over an hour and a half, proving too good on serve, having not offered up one break point and winning 89 per cent of first-serve points.

He was also too good with his return for the Italian, winning 35 per cent of the points on Sonego's serve.

World number nine Schwartzman was knocked out in three sets by Korda 6-3 4-6 7-5 as he continues his super run.

Florida resident Korda, 20, reached his maiden ATP 1000 quarter-final, showing fight after the Argentinian raised his game in the second set, winning after an early break in the last.

Just look at this tennis!