Olympic champion Neeraj Chopra will compete alongside a host of international stars including Daniil Medvedev for the award.

India' star javelin thrower Neeraj Chopra has been shortlisted for the Laureus World Breakthrough of the Year Award. In his Olympics debut, the 23-year-old athlete won India's first-ever gold medal in the track and field. He destroyed a star-studded field in the men's javelin throw final at Tokyo Games with a throw of 87.58 metres in his second attempt to claim the top honours. (More Sports News)

Now, he will vie against some of the finest in world sports for a prestigious award, for which no other Indian has been nominated before. He however is the third Indian to be nominated for a Laureus Award after wrestler Vinesh Phogat, who was shortlisted for the Comeback of the Year Award in 2019 and cricketer Sachin Tendulkar, who won the Sporting Moment Award 2000-2020.

"I’m delighted to be nominated for this Laureus Award and it's a great honour for me to be recognised in the wider sporting world for what I achieved in Tokyo," Chopra said.

Chopra is currently ranked second in the world and will defend both the Asian Games and Commonwealth Games titles in a busy 2022. He will also chase a maiden World Championships medal later in the year.

"From being a kid in a small village in rural India who only took up sport to get fit, to standing on top of an Olympic podium, it’s been quite an eventful journey so far. I feel privileged to be able to represent my country and win India medals at the global stage, and now to have this recognition from Laureus and be considered alongside such exceptional athletes is a really special feeling," he added.

And Chopra's competitors for the Laureus World Breakthrough of the Year Award are:

- Britain's Emma Raducanu, who became a global tennis sensation when she won the US Open at the age of 18;
- Russia's Daniil Medvedev, who won his first Grand Slam at the US Open;
- Spain's football Pedri. The 19-year-old Barcelona starlet was also voted the best young player at the Ballon d'Or;
- Venezuelan Yulimar Rojas, who broke the 26-year-old triple jump world record;
- Australian swimmer Ariarne Titmus, aged 20, who twice beat champion Katie Ledecky at 200 and 400m in Tokyo.

A panel of more than 1,300 of the leading sports journalists and broadcasters in the world have selected the nominees in each of seven categories for this year’s Laureus World Sports Awards. The winners will be revealed in April, following a vote by the Laureus World Sports Academy, a jury made up of 71 legends. 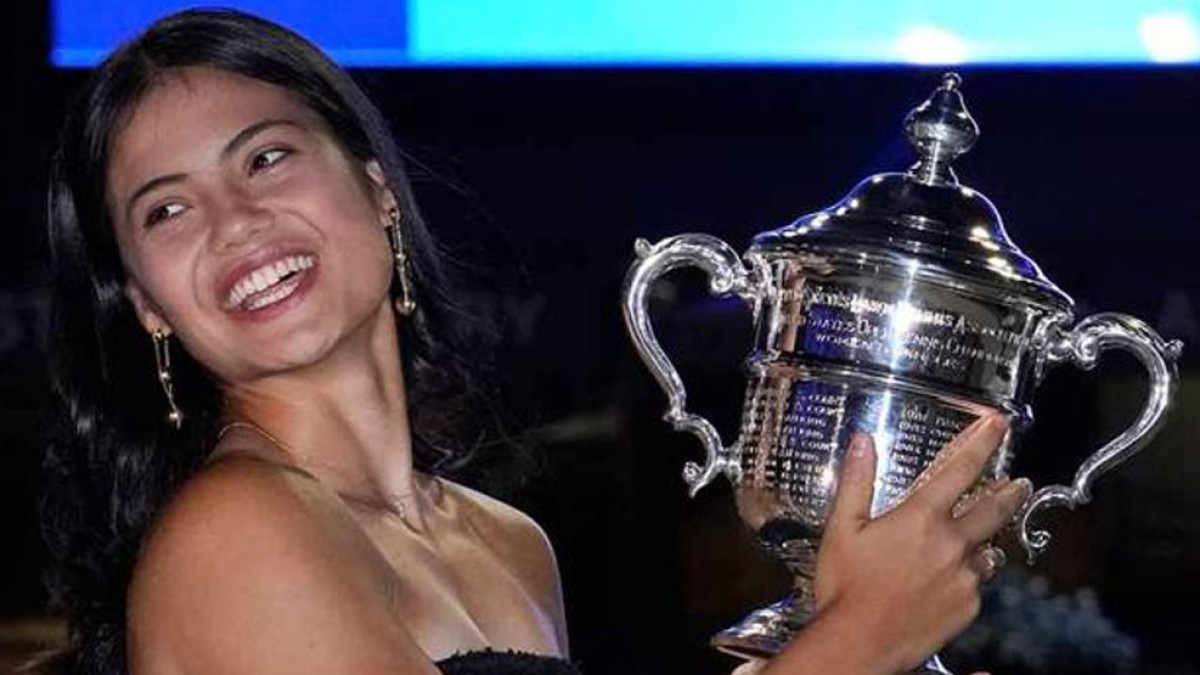 Emma Raducanu became a global sensation when she won the US Open at the age of 18. AP Photo

Meanwhile, the battle for the Laureus World Sportsman of the Year Award will be one of the most competitive ever. Tom Brady, NFL’s greatest quarterback, is nominated along with Bayern Munich’s prolific goalscorer Robert Lewandowski, new Formula One world champion Max Verstappen, tennis world No.1 Novak Djokovic, and two of the greatest Olympians: swimmer Caeleb Dressel, who won five gold medals in Tokyo, and Eliud Kipchoge, who won back-to-back marathon gold medals.

The Italy men’s football team are among the frontrunners for the Laureus World Team of the Year Award after their victory in Euro 2020. There are two other football nominees: the Argentina men’s football team, including Lionel Messi, who won the Copa America; and FC Barcelona women’s football team, who won their first UEFA Champions League. They are joined by the China Olympic diving team, who won gold medals in seven of the eight events, the Milwaukee Bucks, inspired by Giannis Antetokounmpo, who ended their 50-year wait for a second NBA championship, and the Mercedes-AMG Petronas Formula One team which won a record eighth consecutive Constructors’ World Championship.

The Nominees for the Laureus World Comeback of the Year include several sporting giants: the indomitable gymnast Simone Biles, who showed her courage and determination to come back to win a bronze medal on the beam in Tokyo; Mark Cavendish, who fought back from mental and physical health problems to equal Eddie Merckx’s record of 34 Tour de France stage wins, and eight-time MotoGP world champion Marc Márquez, who celebrated his first Grand Prix win for 581 days after a broken arm. Sky Brown, aged 13, recovered from a fractured skull to win a skateboarding bronze medal in Tokyo.

Neeraj Chopra (India) Athletics – won javelin to become India’s first winner of an Olympic athletics gold;
Daniil Medvedev (Russia) Tennis – won his first-ever Grand Slam, dropping only one set in the US Open;
Pedri (Spain) Football – 19, played 53 times in 2020/21 for Barcelona, and every game for Spain in Euro 2020;
Emma Raducanu (UK) Tennis - became a global sensation when she won the US Open at the age of 18;
Yulimar Rojas (Venezuela) Athletics – broke the 26-year-old world record to win triple jump gold in Tokyo;
Ariarne Titmus (Australia) Swimming – aged 20, beat champion Katie Ledecky at 200 and 400m in Tokyo.

LAUREUS SPORTSPERSON OF THE YEAR WITH A DISABILITY AWARD