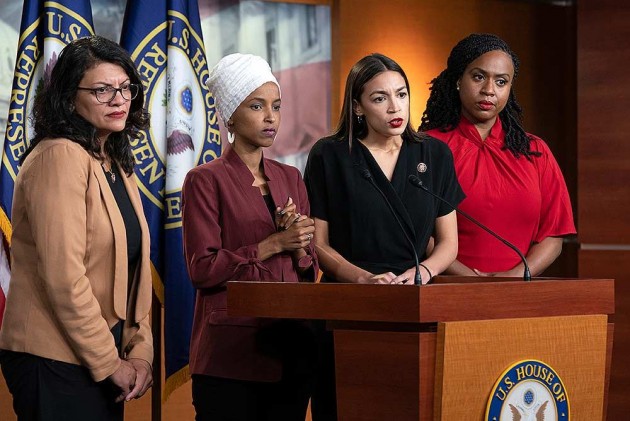 First-term House Democrats Ilhan Omar and Rashida Tlaib, were expected to visit Israel and the Palestinian territories over the weekend.

However, Israel scrapped the visit shortly after Trump weighed in via Twitter to say it would be showing "great weakness" if the Jewish state allowed the lawmakers in, leading to suspicion that Netanyahu acted only after receiving ally Trump's imprimatur.

"It would show great weakness if Israel allowed Rep. Omar and Rep. Tlaib to visit. They hate Israel & all Jewish people, & there is nothing that can be said or done to change their minds," said Trump on Twitter.

"They are a disgrace!" he added

While the group's members "disagree" with support by House Democrats Ilhan Omar and Rashida Tlaib for a boycott on Israel, AIPAC said, "we also believe every member of Congress should be able to visit and experience our democratic ally Israel firsthand."

Senator Susan Collins was one of the only Republican lawmakers to openly break with Trump over the incident.  "The Trump Administration made a mistake in urging Israel to prevent them from entering the country," she said.

Senate Minority Leader Chuck Schumer, a staunch Israel ally on Capitol Hill, called the decision "a sign of weakness (that) will only hurt the US-Israeli relationship and support for Israel in America."

House Speaker Nancy Pelosi herself has clashed with Omar and Tlaib, who has been accused of anti-Semitic and anti-Israel statements.

But Pelosi, the top Democrat in Congress, called the travel ban "beneath the dignity of the great State of Israel."

Hanan Ashrawi, a member of the Palestine Liberation Organization (PLO) Executive Committee, said in a press statement that banning the two Democratic congresswomen from visiting in the Palestinian territories "is outrageous and hostile action against the US people and their representatives."

"The Israeli decision is unprecedented and dangerous, which defies all diplomatic rules and violates the right of the Palestinian people to communicate with the entire world," Ashrawi added.

"Israel, as an illegal occupying power, doesn't have the right to bar Omar and Tlaib who wanted to visit Palestine and see the reality of the Palestinian people who live under the occupation," she noted.

Omar is a refugee who fled Somalia as a child, and Tlaib was born in Detroit, Michigan to Palestinian immigrants.

Omar has been at the centre of a swirling debate about anti-Semitism and discrimination since she joined Congress in January.

Her remark that US political backing for Israel is fueled by money from a pro-Israel lobbying group, and her open support for a boycott and divestment movement against the Jewish state, led to fierce criticism from both sides of the political aisle.