The incident happened between Sunday night and Tuesday morning at the Swaminarayan Temple in the Louisville city, authorities said, who are investigating the incident as a hate crime. 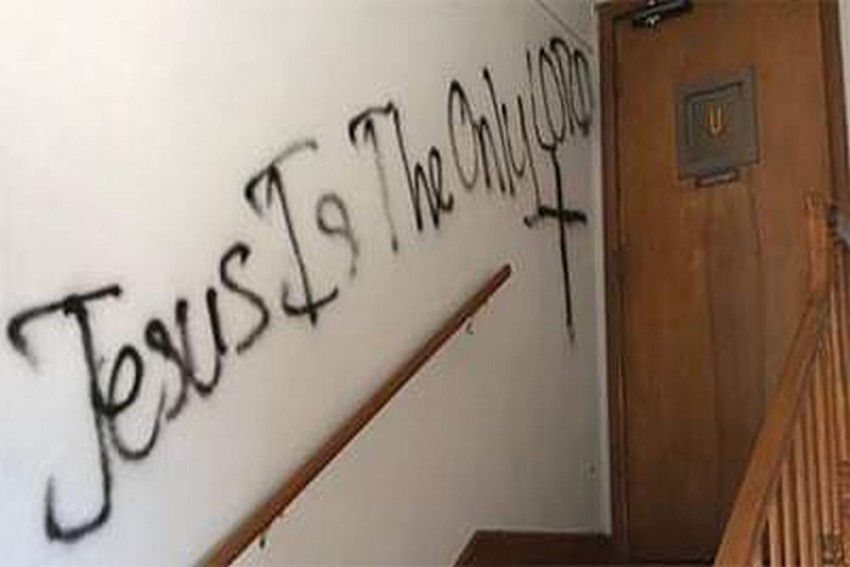 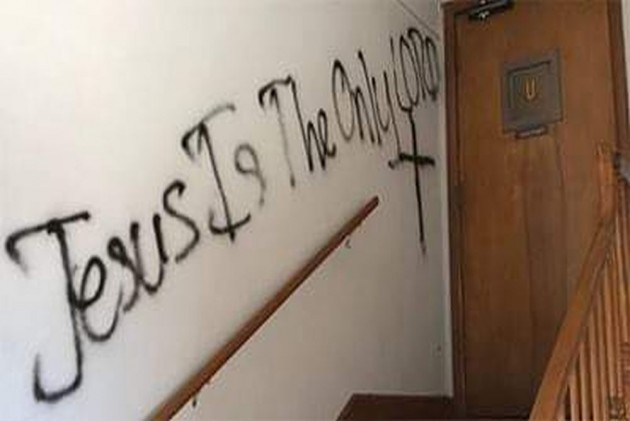 Miscreants in the US state of Kentucky vandalised a Hindu temple and sprayed black paint on the diety besides writing repugnant messages on the walls of the worshipping place.

The incident happened between Sunday night and Tuesday morning at the Swaminarayan Temple in the Louisville city, authorities said, who are investigating the incident as a hate crime.

There are no suspects but an investigation is ongoing, police said and temple officials said no video of the incident is available.

According to local media reports, vandalism resulted in deity image sprayed with black paint, broken windows, walls spray-painted with inappropriate messages and graffiti. A knife was stabbed in the chair and cabinets were emptied.

The incident has sent shock waves through the Indian-American community in Louisville Kentucky.

Condemning the incident of vandalism, Louisville Mayor Greg Fischer called upon the city residents to stand up against this hatred.

"Anytime we see hatred or bigotry we will stand against it. The cowards who did this have only given our community more fuel and determination to embrace compassion, understanding, and each other," Fischer said as he visited the vandalised temple Wednesday.

"Sometime between the end of services at the Swaminarayan Temple on Bardstown Road on Sunday and the time a repairman arrived on Tuesday morning, vandals broke into a window and vandalised spots throughout the building," he said.

The vandalism of this temple, Fischer said is another example of the work "we still have to do as a city and a nation to make sure we live to our ideals of equality, of a country where everyone is treated with the respect we all deserve."

Fischer said that the vandals wrote "repugnant messages of hate."

"Regardless of what religion you are, this should not happen," Raj Patel from the Swaminarayan temple said.

"We come here to worship. We should not have to turn our backs to see who is behind us, but we should be happy to come here and worship in peace," he added.

"What I’m here to do today is to assure everyone that attends this temple that we will do our best to find and hold accountable the person or persons who committed this vandalism and this hate crime," Conrad said.

Conrad said "too many incidents like this" have happened in Louisville, referencing a past vandalism incident at the Louisville Islamic Center and heightened safety concerns at a local Sikh temple following a deadly temple shooting in Wisconsin in 2012.

Kentucky State Representative Nima Kulkarni, the first Indian-American elected to the Kentucky General Assembly, said the vandalism was an "act of intimidation designed to weaken our faith and community".

There has been a number of such incidents across the US in previous years.

In April 2015, a Hindu temple in north Texas has been vandalised with nasty images spray-painted on its walls.

In February 2015, Hindu temples in Kent and the Seattle Metropolitan area were also vandalised.

Hindu Temple Desecrated In US, Vandals Blacken Idol, Leave Behind Knife As 'Message'