Home  »  Website  »  National  » News Analysis  »  With A Hug To PM Modi, Rahul Gandhi Has Put BJP On The Back Foot
No Confidence Motion

With A Hug To PM Modi, Rahul Gandhi Has Put BJP On The Back Foot

The sudden embrace puts BJP on the back foot, for the ideas Gandhi proposed preceding the hug—peace, forgiveness and tolerance—are tough to oppose. 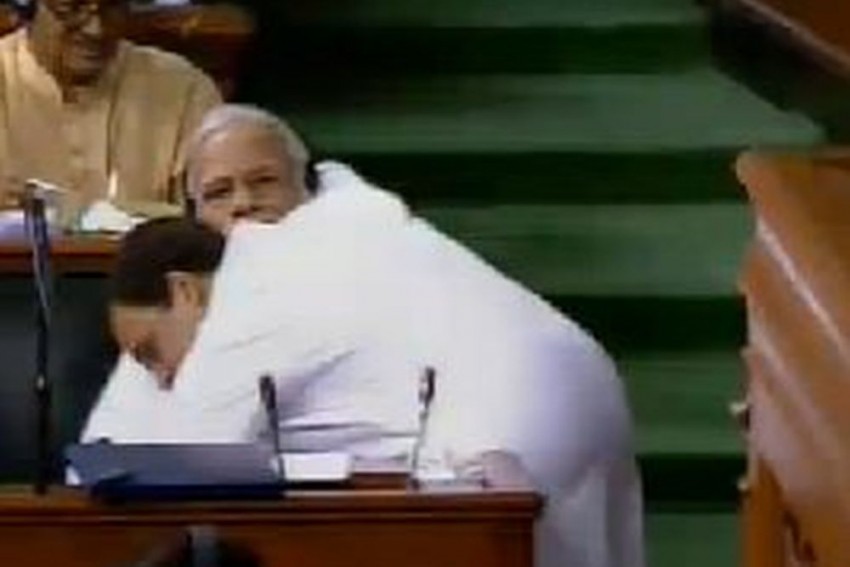 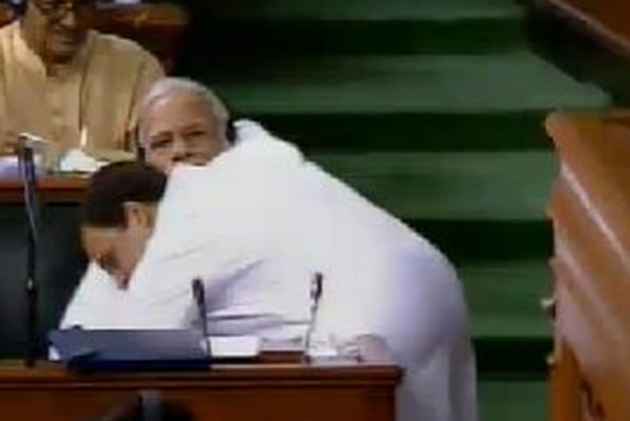 Neither brash and insensitive nor soft and weak: Rahul Gandhi’s embrace of Prime Minister Narendra Modi in Parliament on Friday could well go down in the annals of the Congress party as setting the agenda for elections 2019. By giving a big, theatrical, unexpected hug to his political arch rival and the most powerful Prime Minister India has seen in decades, Gandhi has displayed his readiness to walk the talk in his politics.

The speech, and its culmination in embrace, will give the Congress party’s rank and file the leader they had been seeking and not finding in Rahul Gandhi so far: someone to take pride in, who is not shy of speaking out on controversies and who can deftly ambush a formidable opposition.

The hug’s symbolism was not lost on anybody watching the debate on the no-confidence motion in Parliament. During the latter half of his speech Gandhi had emphasized on what he thinks being a Hindu really means. He put forward the idea that forgiveness and tolerance, even towards those who may cause harm or hurt, is integral to being a Hindu. Gandhi also claimed that it is the BJP and the PM from whom he has learned Hinduism’s deeper significance.

“You will think in my heart there is hatred for the PM…but there is not. I am grateful to the PM, BJP and RSS for they taught me the meaning of being Hindustani,” Gandhi said. The irony will not be lost on the BJP, for Gandhi was, in a subversive way, striking a contrast between ‘good’ and ‘bad’ Hindus, while emphasizing that the idea of good Hindu is deeply intertwined with who is a worthy citizen of Hindustan. The underlying message is that Hindus who have practiced or preached violence or divisiveness in recent times have strayed from the path. This is in direct opposition with the BJP’s idea of Hindi-Hindu-Hindustan, which is to identify Indian-ness, so to speak, with one language and one religion.

Yet, Gandhi shrewdly did not get caught up in a blame game: He asserted that he felt no anger towards the BJP, the PM or the RSS, though they may dislike him in their heart of hearts. He tackled head-on the derisive nickname that Congress’s rivals have given him: “Pappu”, which implies a person incapable of taking an independent stand.

Soon after this Gandhi walked across the house, and appeared to request the PM to stand up. When the PM did not do so, but instead gestured in surprise, Rahul delivered his embrace to a seated Modi, who appeared stricken with shock. It’s true that the House speaker Sumitra Mahajan reprimanded Gandhi for having broken protocol. Yet, Gandhi’s attempt to signal that he—and his party—will not engage in divisiveness, polarization or revenge, momentarily silenced Lok Sabha. Not to be missed was what the cameras caught—a wink from Gandhi to Congress MP Jyotiraditya Scindia across the hall.

So far, the treasury benches had been laughing at Gandhi, their heckling and derision a surefire way to demonstrate that Congress’ leadership should not be taken seriously by the wider public. The sudden embrace puts BJP on the back foot, for the ideas Gandhi proposed preceding the hug—peace, forgiveness and tolerance—are tough to oppose.

Today’s events in Parliament do not imply that Gandhi’s speech will be not be ferociously countered by BJP leaders. The PM will address the house on the no-confidence motion later this evening, and verbal fireworks are certainly on the cards. In fact, the attack on Gandhi will probably be much more virulent from now on. This speech is also no reason to believe that BJP will pull its punches outside Parliament, especially where assembly elections are due. Yet, hugging the PM sends the signal that Gandhi has overcome his perceived drawbacks: his hesitation, shyness and nervousness. These qualities were by and large interpreted as a signal of his fear of taking on the BJP and Modi.

A noticeable change set into the Congress party’s messaging since the Gujarat election campaign in 2017. It no longer shied away from adopting Hindu symbolism, for instance, and popularized Gandhi’s temple visits. Gandhi declared he is a Shiv bhakt during that campaign, harking back to his roots in Kashmir. Yet, his religious identity was relentlessly assailed by the BJP leadership during that campaign. That was when Congress leader from Haryana Randeep Surjewala had declared Gandhi a ‘janeu-dhari’ Hindu, or one who wears the sacred thread of twice-born Hindu castes.

All of this had drawn both praise and derision. But Friday’s hug has become a palpable symbol of the forgiveness and tolerance that Gandhi had just been preaching. It would be difficult for the BJP to malign Gandhi thereafter, with the charge of hypocrisy or being anti-Hindu.

So far Congress has focused on three key agendas when training its guns on the BJP: Democracy and federalism, social justice and harmony and economic development. While Rahul Gandhi stuck to these themes in his speech, he also dwelled on his model of Hinduism, thereby striking a contrast with those who have supported cow vigilantes, those who have indulged in mob violence against ‘outsiders’ in different parts of the country and those who have tried to deny victimization of Dalits and minorities.

Undoubtedly Congress leaders will be relieved and impressed by Gandhi’s confidence and articulation. He seemed to be enjoying politics, at last, and did not stumble as he has in past public addresses. His well-calibrated attacks on the PM and BJP president Amit Shah, showed he is no longer akin to the nervous wreck whom Shahrukh Khan played in the Bollywood flick Darr (“k-k-k-k-Kiran”). As one Congress leader says, “He is now Amitabh Bachchan’s Vijay in Deewar.” No doubt his coming of age will be the talk of the town for days.