The TV channels had already decided that Rakhi was on a publicity hunt. So, they proceeded to ignore the most basic principles of fair reportage and went on to paint her as a publicity-hungry starlet of dubious credibility. 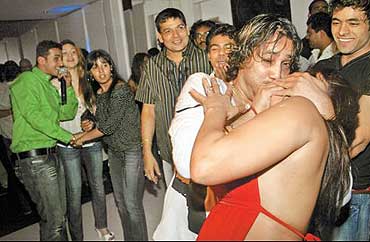 How many of you watched television recently and thought that Rakhi Sawant was making a complete fool of herself? Saw her acting post-facto indignant about something that looked -- from the images shown -- like some consensual party high jinks? I confess, I did. I shrugged my shoulders and damned both her and the TV channels for blowing up what seemed a private non-issue.

That was until a friend of mine in Mumbai e-mailed me some pictures that had appeared in Mumbai Mirror of the actual "kiss" that Rakhi was objecting to. The images clearly show Mika in the middle of a crowd of laughing friends grabbing Rakhi and kissing her violently on the mouth. Rakhi has clearly been taken by surprise and is seen struggling ineffectually, the surrounding crowd laughing. Was Mika overtaken by a moment of ungovernable passion? That would, however unforgivable, still have been understandable. No – the worst excess is this – Mika is looking into the cameras and making sure they get the best angles of him humiliating Rakhi.

That Rakhi is demanding just a public apology from the man is big of her, really big. I would have wanted the man horse-whipped. Mika’s expression, his body language, his manner – they scream of just that attitude that allows policemen in our country to rape a girl because she is there and she is alone.

Our TV channels, in their now common style of embarrassing excess, covered the incident ad nauseam. But here’s the catch – they had already decided that Rakhi was on a publicity hunt. So, they proceeded to ignore the most basic principles of fair reportage and went on to paint her as a publicity-hungry starlet of dubious credibility. They repeatedly broadcast images that only showed Mika kissing Rakhi in a fairly unobjectionable manner and Rakhi then proceeding to feed him birthday cake… BUT not once was it mentioned that this was not the incident that Rakhi was objecting to; that there was a later incident that clearly shows that the woman did indeed have cause for complaint.

Of course, this righteous anger on Rakhi’s behalf might be totally gratuitous. Rakhi and Mika could well have engineered the whole episode for publicity. If that is the case, why not simply deny them the publicity by ignoring the incident? Many of our serious newspapers did not cover it. If the TV channels felt the need to blow it up the way they did by pretending it was a piece of serious news, then it behooves them to say it the way it is. Show viewers all the pictures, not select ones that prop up a pre-decided story angle.

Unfortunately for Rakhi, she is not an articulate woman, a fact the channels exploited. An eminently supercilious Rajdeep Sardesai chose to pillory the woman on his show. Not directly – which one could have respected -- but by insinuation, by implication, and leading questions for which Rakhi was no match. Worse, he again showed the wrong pictures. And oh the hypocrisy: even as he proceeded to milk the incident for all it was worth, a smug Sardesai kept hinting at how truly low he was stooping to cover it on his superior show.

Within the space of that one show – and several other similar ones – the TV channels managed to imply several incredibly unjust things: that Rakhi deserved to be humiliated in public at a friend’s birthday bash because of her reputation, the way she dresses, because she chooses to party and have boyfriends. This is the same media that waxes eloquent when some political parties ban Valentine’s Day or the lunatic Right fringe targets couples romancing in parks. My question: just how different is this from what the channels did last week?

More important: whether the Rakhis of the world are publicity-hungry or not, it is up to the media to choose how to treat a particular piece of news. We can’t have TV anchors bleating about how they have been used – when they can clearly opt not to be.

At best, the TV channels don’t exactly cover themselves in glory. The sight of them falling like a pack of hyenas on every morsel of almost-news is nauseating. But if they are going to add distortion to their shrillness, then we have a serious problem.