'The Most Lenient Ban'

Remarked a relieved Inzamam. 'I have no regrets at all because we have been cleared of the ball tampering charge which was a serious accusation. I had an idea that I would face some sort of ban. I will not appeal against it. This is a big moral victo 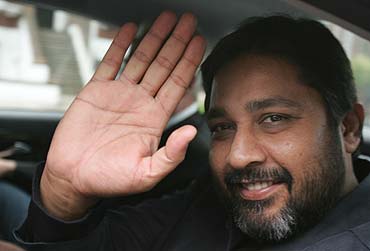 One of cricket's most bizarre and explosive events today resulted in a four ODI match ban against Pakistan skipper Inzamam-ul Haq who was found guilty of bringing the game into disrepute but cleared of the more serious charge of ball tampering in a Test match against England on August 20.

The ICC adjudicator Ranjan Madugalle's verdict means that the Pakistan captain, one of world's leading batsmen, will miss the Champions Trophy to be played in India next month. Inzamam chose not to exercise his right of appeal within 24 hours against the penalty.

In an extraordinary fiasco at the Oval in the fourth Test between Pakistan and England, controversial Australian umpire Darrell Hair had in effect accused the Pakistani team of ball tampering following which the Pakistanis refused to take the field on schedule leading to the forfeiture of the match. Hair was accused of bias against sub-continental teams and the controversy has simmered since then.

The four-match ODI ban is relatively less harsh considering that the charge could have invited a maximum ban of four to eight ODIs or two to four Tests.

"On two occasions he led a protest against the umpires. I have taken into account Mr Haq's expression of regret and apology. I decide that Mr Haq should be banned for four one-day matches with immediate effect," Madugalle said at a press conference.

"What happened was unfortunate. It has taken time but the matter has been resolved now," he said.

ICC has allowed Pakistan to field a replacement for Inzamam in the Champions Trophy squad which will now be led by Younis Khan.

With Inzamam being given a clean chit on the ball tampering charge, a question mark hangs on the fate of Hair who laid the charges alongwith his West Indian counterpart Billy Doctrove.

Hair, who had offered to quit his post in exchange of USD 500,000 in an e-mail to ICC but later withdrew the offer, has not officiated in any match since the Oval fiasco.

Inzamam, on his part, said he was satisfied with the verdict since it exonerated him of the more serious charge of ball tampering since it tantamounted to cheating.

"I have no regrets at all because we have been cleared of the ball tampering charge which was a serious accusation against us and basically meant we were cheating in the Test. Everyone knows that we were in a strong position to win that game," he said.

"I had an idea that I would face some sort of ban. This is the most lenient ban and I will not appeal against it. This is a big moral victory for us and I am sure it will help the team do very well in the Champions Trophy," he added.

As the immediate fallout of the verdict, the ICC announced that Hair would not officiate in the Champions Trophy, citing "safety and security" reasons.

India had recently written to the ICC not to consider Hair for umpiring duty for the tournament, saying his appointment could lead to crowd trouble.

An indignant Hair said he wished to continue umpiring.

"I wish to keep on being an umpire," Hair said.

"My umpiring performance or career is on public record and if other people consider I am still good enough to umpire I will continue."

Hair also denied that he felt he had been made a scapegoat by the ICC.

Hair and Billy Doctrove, the other on-field umpire for the Oval Test, were among the 11 witnesses who gave evidence during the hearing which generated considerable media interest.