In his letter to the speaker, Tharoor said the action of representatives of three ministries constitutes "breach of parliamentary privilege and contempt of the House". 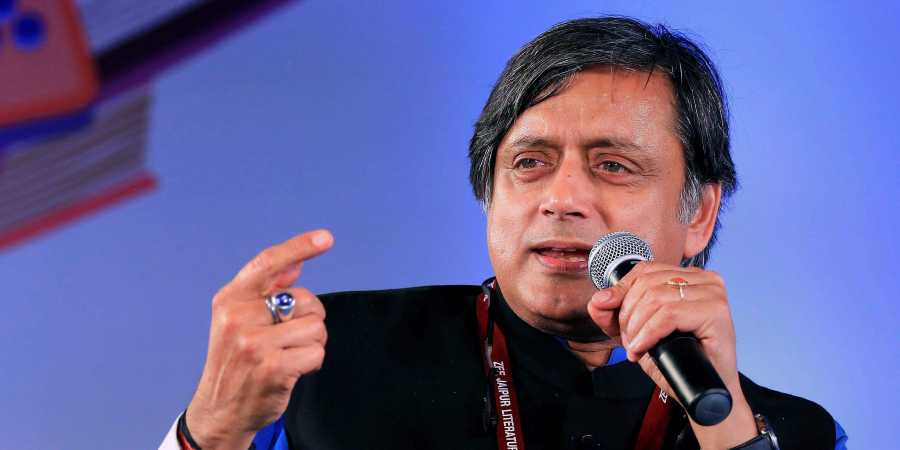 The head  of parliamentary standing committee on Information Technology Shashi Tharoor and BJP MP Nishikant Dubey are at loggerheads as the former sought action from Lok Sabha Speaker Om Birla  over the  ministry officials' "last-minute refusal" to attend a meeting of the panel to which the later retaliated by shooting off a missive to Birla calling for the Congress leader's removal as the panel's chairperson.

In the letter battle, the BJP MP alleged that Tharoor is known for his "eccentric nature" as well as "acute psychological disorder and disorientation", while the Congress leader later tweeted, without naming anyone, that he doesn't want to respond to "uncouth and obnoxious comments" and cited a quote from Irish playwright George Bernard Shaw, "I learned long ago, never to wrestle with a pig. You get dirty, and besides, the pig likes it."

In his letter to the speaker, Tharoor said the action of representatives of three ministries constitutes "breach of parliamentary privilege and contempt of the House".

Dubey, who is a member of the panel, urged the speaker not to take any cognizance of Tharoor's letter.

The BJP MP urged Birla to "initiate urgent action and dismiss" Tharoor from the parliamentary standing committee on information technology's chairmanship, saying otherwise he will continue to raise "irrelevant issues".

The panel was to hold a meeting on Wednesday to discuss several issues including the Pegasus snooping allegations.

However, the meeting could not take place as BJP members of the panel did not sign the attendance register, even though they were present in the meeting room, leading to a lack of quorum.

In his July 29 letter to Birla, Congress MP Tharoor said just before the sitting, he was informed by the committee branch of the secretariat that e-mail communications have been received on July 28 afternoon from the three ministries/department that their representatives would not be able to appear before the committee.

Tharoor said the Ministry of Home Affairs forwarded their mail at 2:33 pm, MeitY at 2:44 pm and the Department of Telecommunications at 2:52 pm on July 28.

He said that as chairperson of the panel he did not excuse these witnesses from attendance.

"The last-minute refusal of the ministries/department to appear before the committee has been unprecedented and clearly constitutes breach of parliamentary privilege and contempt of the House. Besides, this has undermined the authority of a parliamentary committee," Tharoor said.

He urged the Lok Sabha speaker to take serious cognisance of this matter and undertake action as deemed appropriate under the rules.

In his letter to Birla, Dubey hit out at Tharoor for seeking action over the issue, saying it is also a matter of record that till date, no Parliamentary Committee - either serviced by Lok Sabha or Rajya Sabha - has ever initiated any privilege proceedings against the officials of the Government of India who expressed their inability to appear before any Committee due to administrative exigencies.

"But, Dr. Tharoor, who is known for his 'eccentric nature' as well as 'acute psychological disorder and disorientation' has not honoured this tacit 'concept of mutual respect' between the two organs of the governance i.e., the 'Executive' and the 'Legislature', purely due to his parochial objective of loosening the noose of his 'sacking' from the chairmanship of the committee on information technology," Dubey alleged in his letter dated July 30.

Without naming anyone, Tharoor tweeted a quote from Irish playwright George Bernard Shaw.

"To the journalists asking for my response to certain uncouth & obnoxious comments, this is why I have no intention of replying!" he said on Twitter with Shaw's quote -- "I learned long ago, never to wrestle with a pig. You get dirty, and besides, the pig likes it."

The committee was expected to discuss the Pegasus snooping case in its last meeting which did not take place due to lack of quorum.

An international media consortium has reported that over 300 verified Indian mobile phone numbers were on a list of potential targets for surveillance using Israeli firm NSO's Pegasus spyware.

Opposition leaders including Rahul Gandhi, two union ministers -- Prahlad Singh Patel and Railways and IT Minister Ashwini Vaishnaw, businessman Anil Ambani, a former CBI chief, and at least 40 journalists are on the list on the leaked database of NSO. It is, however, not established that all the phones were hacked.