Worst Madrid? I'd Sign To Win Every Clasico Like That – Sergio Ramos Hits Back At Gerard Pique

After Real Madrid were criticised by Gerard Pique, Sergio Ramos hit back at the Barcelona defender 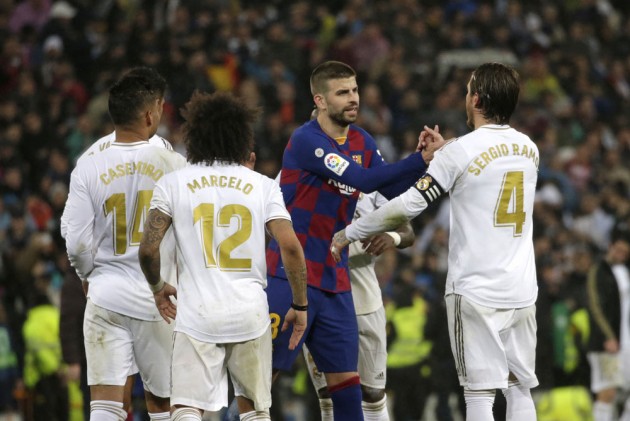 Sergio Ramos hit back at Gerard Pique over his criticism of Real Madrid, saying he would sign to win every El Clasico playing as badly as the Barcelona defender suggested. (More Football News)

Vinicius Junior and Mariano Diaz scored second-half goals as Madrid moved above Barca and into top spot in La Liga with a 2-0 win on Sunday.

But the performance did little to impress Pique as the Barca defender said the hosts in the first half were "the worst Madrid" he has faced at the Santiago Bernabeu.

Madrid captain Ramos said he would happily win every Clasico playing how his side did.

"Everyone's opinion is respectable. I sign to win all Clasicos by making a first half as bad as he says," he told reporters, via AS.

"The approach was different. In the first half, we left the ball and in the second we decided to go.

"They were not so fresh and we started to generate chances."

With 12 LaLiga games remaining, Madrid hold a one-point lead over their rivals, having lost just two league matches this season.

While pleased with the advantage, Ramos urged his side to remain focused late in the campaign.

"That's right. After the latest results we wanted to claim [first] and what better way than at home and before a great team like Barca," the defender said.

"It was a unique opportunity to depend on ourselves. There are three important points but there is much left.

"We must have our feet on the ground."