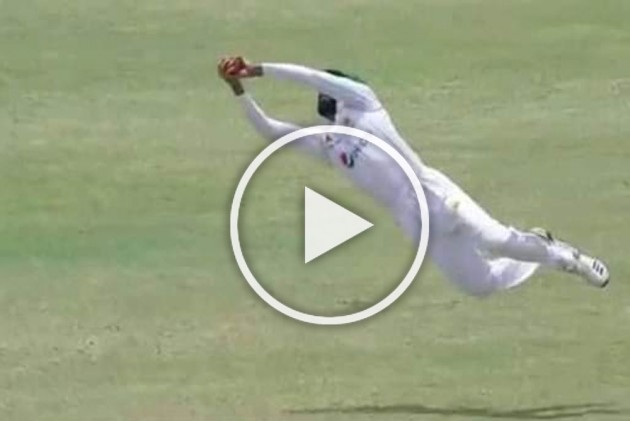 Despite rain playing spoilsport, Pakistan gave themselves a chance to level the two-match series by setting a steep 329-run target for the Windies. At the close of play on Day 4, the Windies were 49/1 in 19 overs. Windies won the first Test by one wicket.

Alam, who resumed from 76 after retiring hurt due to cramps on Day 1, made an unbeaten 124 runs off 213 balls to help Pakistan declare their first innings at 302/9.

WATCH: What About THIS Imran Butt Effort

The 35-year-old then returned to take showcase his fielding brilliance as Pakistan dismissed Windies for a paltry 150 runs.

In the 40th over, Shaheen Afridi forced Blackwood to fend off a short delivery. But the Windies batsman, who was batting on 33 off 50 deliveries, failed to check it and sent the ball ballooning towards backward point.

He is the only non-Indian in the top-five list, which has former India captains -- Sourav Ganguly (25), Sunil Gavaskar (25) and Vijay Harare (26).

Younis Khan (in 28 innings) was the fastest Pakistan batsman to hit five Test hundreds before Alam.

Fawad returned to Test cricket in August last year against England after nearly 11 years in the wilderness. This was his fourth ton since his comeback. And only England captain Joe Root has hit more Test centuries in this period.