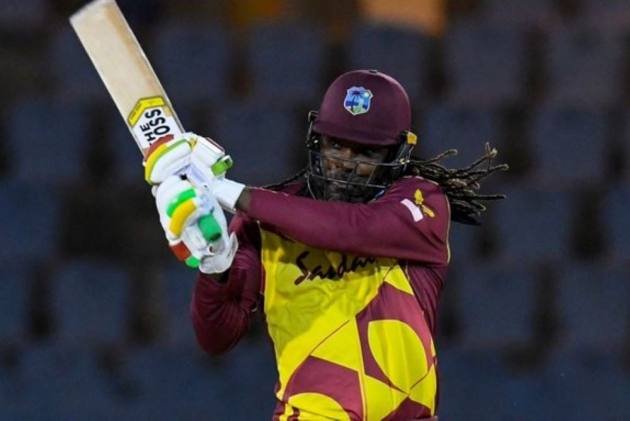 The West Indies finished 142-4, chasing down Australia’s total 141-6 with 31 balls to spare in the third of five T20s. Stand-in captain Nicholas Pooran hit the winning runs to remain unbeaten on 32 from 27 balls.

But it was all about former captain Gayle in St. Lucia.

The 41-year-old left-hander slogged seven sixes and four boundaries as he posted his first Twenty20 International half century since an unbeaten 100 against England in March 2016.

He went on the attack in the second over of the reply when he plundered paceman Josh Hazlewood for a six and three consecutive boundaries.

He hit three straight sixes against spinner Adam Zampa to reach his 50 in the 11th over, raising his "Six Machine" bat to show "The Boss" sticker on the blade.

Accepting the award for player of the match, Gayle recommended people shouldn't watch the statistics too closely but “just respect the Universe Boss."

"You all knew I was struggling with the bat,” he said. “To be able to get some runs today was very pleasing."

Gayle said his main focus was on the T20 World Cup starting in October in the United Arab Emirates, when he'll be 42.

The West Indies won the first game of the series by 18 runs after a stunning batting collapse from the Australians, and took the second game by 56 runs.

Australia needed a win to have any chance of staying in contention in the series, but didn't post enough runs.

Wrist spinner Hayden Walsh Jr., who played eight T20s for the United States before getting picked for the West Indies in 2019, took two wickets in his second over with the kind of bowling which restricted Australia's run-rate.

He returned 2-18 from four overs to lead the attack, while Obed McCoy, Dwayne Brave and Fabian Allen all took a wicket apiece.

The fourth game in the series will be played Wednesday. (AP)