Virat Kohli put in a talismanic display to lead India to an ODI series victory over West Indies at Queen's Park Oval. His partnership with Shreyas Iyer was noteworthy. 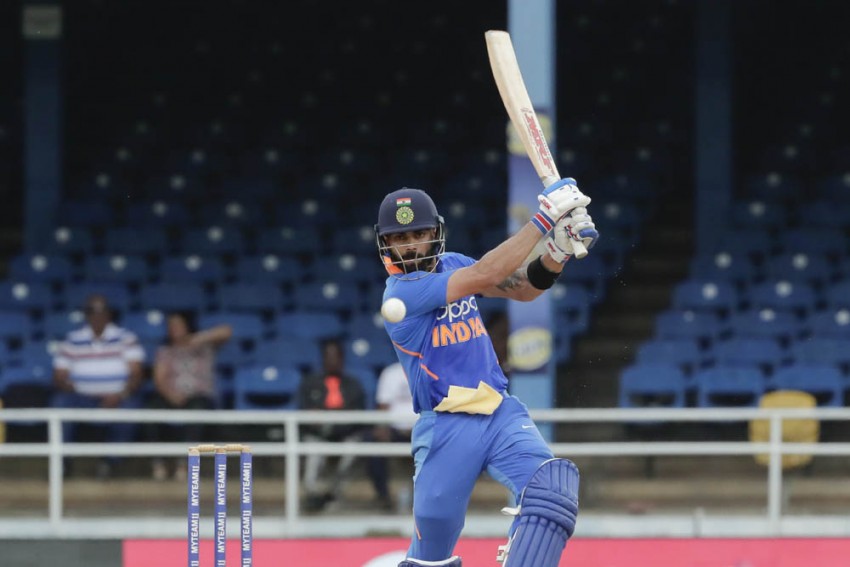 The Men in Blue won the series 2-0, after the first match was abandoned due to rain.
AP
Outlook Web Bureau August 15, 2019 00:00 IST West Indies Vs India, 3rd ODI: Virat Kohli Credits Experience For His Match-Winning Ton 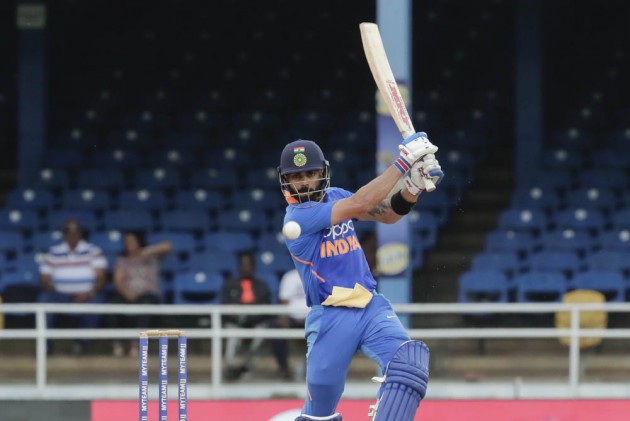 After slamming 114-runs to lead India to victory against West Indies in the final ODI of the three-match series, skipper Virat Kohli credited experience for his match-winning display. The match took place on August 14, at Queen's Park Oval.

The Men in Blue won the series 2-0, after the first match was abandoned due to rain.

"Two good games with the bat for me, but more importantly we got the result because of my contribution, so it makes me feel much better and eventually all that matters when you cross the line. Shreyas with the way he played took the pressure off me and I played my natural game," he added.

The match was curtailed due to rain and India eventually had to chase 255 in 36 overs.

The team was reduced to 92/3 at one stage, but skipper Kohli was joined by Shreyas Iyer in the middle and the duo formed a 120-run stand to ease the pressure and consolidate Men in Blue's position in the match.

Shreyas was eventually dismissed after playing a knock of 65 runs off just 41 balls. Kohli heaped praise on Shreyas, saying the right-handed batsman played with a lot of confidence.

"Shreyas has come along really well. He has stepped in and played with a lot of confidence, I think that orders well for the team. He has presented a strong case for himself to be a regular feature in the middle order. He was very sure about his game, hopefully, he builds on his game," Kohli said.

"Sometimes you can feel like that the situation is not challenging you enough. But in international cricket, every day you need to contribute, I think Shreyas understood the value of performing here. He was brave under pressure, he is heading in the right direction," he added.

Kohli was struck on his thumb by a delivery from Windies quickie Kemar Roach during India's innings, but the skipper said he will be fine for the first Test match against West Indies.

"Thumb's good. Luckily it's not broken so I shall be good for the first Test," Kohli said.

Gayle after playing a knock of 72 runs was sent back to the pavilion by pacer Khaleel Ahmed. Upon his dismissal, the left-hander had received a standing ovation from the Trinidad crowd.

Every Indian player also congratulated Gayle, which led to speculations that the left-handed batsman might just have played his last match for the team from the Caribbean.

Skipper Kohli and Gayle were seen doing their famous high-five on the pitch after Gayle's dismissal.

However, after the match, Gayle revealed that he has not announced his retirement yet but skipper Kohli praised Gayle's fun-loving attitude, calling him the 'nicest human being around'.

"He has done so much for Windies cricket. He is the nicest human being around and for me, that is the biggest quality. He is always smiling, Chris Gayle the person is the best part about him. I have been fortunate enough to get to know him," Kohli said.

Earlier in the match, West Indies had won the toss and the side had opted to bat first. Openers Gayle and Evin Lewis stitched together a partnership of 115 runs.

Both batsmen were then quickly sent back to the pavilion and after their dismissal, the match was halted due to rain.

Once the action resumed, India were able to take wickets at regular intervals to restrict Windies.

"Firstly, we were glad we got the two wickets and then it rained for a bit to break the momentum. During the break, we were nervous, as Duckworth-Lewis would have taken the game away from us. Actually, it was good that we got game time," Kohli said.

"When Chris and Lewis play like that, you understand why they are rated as the two most dangerous batsmen in the world. When they get going, you cannot do much as a skipper," he added.

West Indies and India will next face each other in the two-match Test series from August 22. It is going to be part of the World Test Championship.