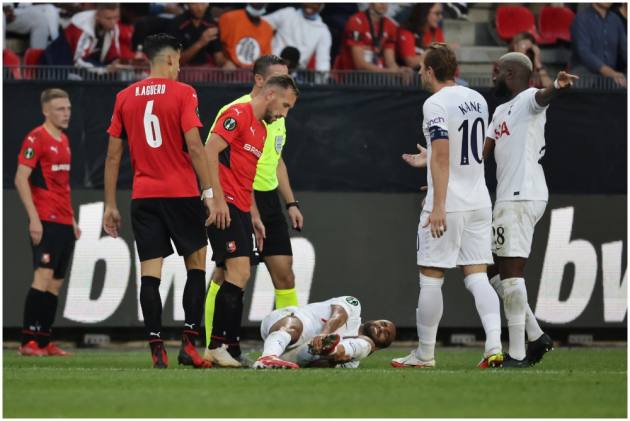 Tottenham Hotspur were dealt a heavy blow ahead of their vital Chelsea clash in the English Premier League on Sunday after Steven Bergwijn and Lucas Moura limped off the pitch in their 2-2 Europa Conference League match against Rennes on Thursday. (More Football News)

With South Korean Son Heung-Min still recovering from a calf injury, Tottenham could be short of attackers against their London rivals, adding more woes to manager Nuno Espirito Santo’s plans. Bergwijn was the first to leave on the half-hour mark after turning his ankle before Moura limped off in the second-half following a heavy challenge.

The Portuguese coach is still without the services of Cristian Romero, Giovano Lo Celso and Davinson Sanchez as all the three are serving their isolation in Croatia after deciding to travel for international duty in South America in defiance of Premier League rules.

Clearly, Santo was frustrated after the draw.

“It’s been terrible. I must be honest. Let’s not hide behind anything,” the Spurs boss said. “After the Watford game, everything that has happened has not been very good for us. But this is football. And we know it's a moment we have to overcome.”

Tottenham Hotspur are lying at the seventh spot in the EPL with nine points from four games and a win on Sunday would leapfrog them up in the top five. Asked if Bergwijn or Moura would be available against second-placed Chelsea, Santo sounded negative.

“Painful, really bad. I cannot tell you. They are being taken care of by the medical department. But it’s been tough. Today, we tried to show the players solutions, thinking about the game on Sunday. But it's about overcoming obstacles. That will make us stronger for the future, for sure,” he added.

Tottenham started the season with a bang securing three wins in as many games in the Premier League. However, a poor 3-0 loss at Crystal Palace and their lethargic display on Thursday have left the fans concerned just before the high-octane clash at home.