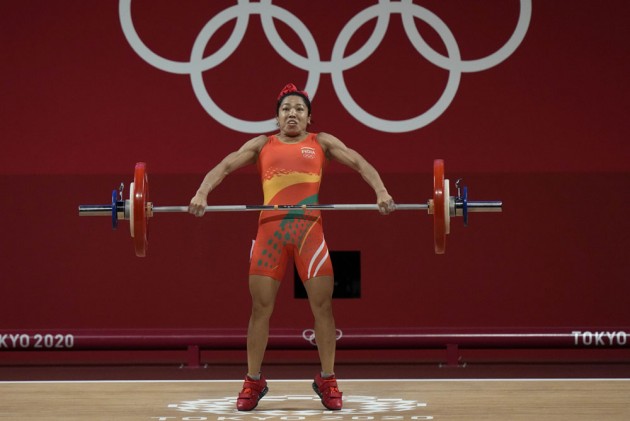 Former world champion Saikhom Mirabai Chanu exorcised the ghost of Rio Games 'no lift' with a lift of 202 kgs (87+115) to claim the silver medal in the women's 49kg category at Tokyo International Forum on Saturday.

Mirabai, 26, thus won the first medal for India in the Tokyo Olympics. Karnam Malleswari was the only Indian weightlifter to have won an Olympic medal, a bronze in the 69kg category at the 2000 Sydney Games.

A confident Mirabai entered the competition with the highest entry weight of 210kg, five kilograms more than her personal best, followed by Zhihui (205kg), who had previously lifted 213kg (96g+117kg) at the Asian championship.

Mirabai, in her first attempt in snatch, lifted 84kg, then settled with 87kg in her second attempt. She failed her final attempt (89kg).

China's Hou Zhihui started on 88kg, then created a new Olympics record with a lift of 94kg, which is two kgs below her own world record.

Thus, the Indian lifter entered the clean & jerk with a deficit of seven kgs, to Zhihui.

In clean & jerk, Mirabai, who holds the world record, could manage only 115k kgs for a total of 202 kgs.

The diminutive Manipuri thus ended India's 21-year wait for a weightlifting medal at the Olympics.

Favourite Zhihui won the gold medal with an Olympic record effort of 210 kg.

Indonesia's Aisah took bronze with a combined lift of 194kg.