Pooja dominated Algeria's Ichrak Chaib in all three round, securing the match with 5-0 verdict 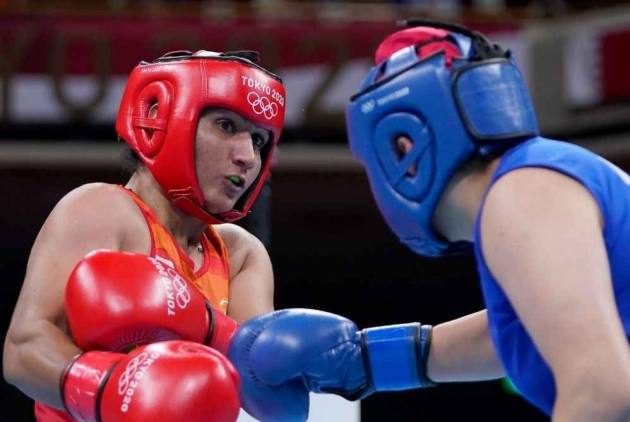 Indian boxer Pooja Rani (75kg) out-punched Algeria's Ichrak Chaib in her opening bout to enter the quarterfinals of her maiden Olympic Games in Tokyo on Wednesday.

The 30-year-old Indian clinched it 5-0, thoroughly dominating a rival 10 years her junior.

The Haryana-boxer was in command with her right straights and also benefitted immensely from Chaib's lack of balance in the ring.

All three rounds were a story of Rani's domination as Chaib, also appearing in her maiden Olympics, just could not figure a way to connect cleanly.

All Rani had to do throughout the bout was counter-attack as Chaib failed spectacularly in trying to hit powerfully, her wild swings mostly missing the target area.

Next up for Rani is Olympic bronze-medallist, two-time Asian champion, and former world gold-medallist Li Qian of China.

The two will square off on July 31.

The 31-year-old has an impressive record against the Indian, having beaten her in the semifinals of the 2014 Asian Games as well as last year's Asian Olympic qualifiers in Jordan.

Rani's Olympic journey has been about many struggles at several junctures. She battled a career-threatening shoulder injury (2017), a burnt hand (2016) and lack of financial support before making it this far.

Her police officer father did not want her to pursue the sport as he felt boxing was a sport meant for aggressive people.

"Maar lag jaegi (you will get hurt). That's what my father said. He insisted that the sport was not meant for me because in his mind, boxing was pursued by aggressive people," she had recalled in an interview to PTI detailing her journey.

On Thursday, six-time world champion M C Mary Kom (51kg) will fight her pre-quarterfinal bout against Colombia's Ingrit Valencia, a boxer she has defeated both times the two have faced off.

Mary Kom is chasing her second Olympic medal, having won a bronze in the 2012 London edition.

In the men's competition, debutant Satish Kumar, the first super heavyweight (+91kg) to make the Olympic cut from India, will open his campaign in the pre-quarterfinal stage against Jamaica's Ricardo Brown.

Satish is a former Asian Games bronze-medallist and a Commonwealth Games silver-medallist.

So far, Manish Kaushik (63kg), Vikas Krishan (69kg) and Ashish Chaudhary (75kg) have bowed out with opening-round losses from among the nine-strong squad that qualified for the Games.