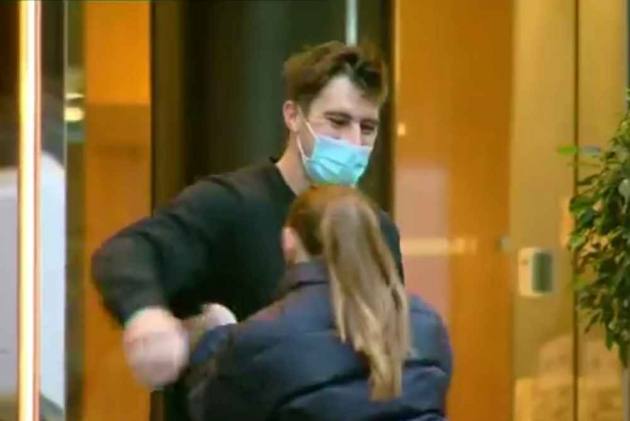 The 38-member Australians landed in the country two weeks ago after a stopover in Maldives due to travel ban from COVID-ravaged India.

The highlight of the day was premier fast bowler Pat Cummins who plays for Kolkata Knight Riders in IPL exiting the hotel and reuniting with his pregnant partner Becky Boston, a video of which was uploaded on Twitter by well-known Australian sports journalist Chloe-Amanda Bailey.

"Video of the day! After eight weeks away for the IPL, Pat Cummins finally leaves hotel quarantine and reunites with his pregnant partner Becky. All the feels!" Bailey tweeted alongside the video.

Video of the day! After eight weeks away for the IPL, Pat Cummins finally leaves hotel quarantine and reunites with his pregnant partner Becky. All the feels! pic.twitter.com/YA3j98zJId


Besides Cummins, batting maestro Steve Smith, big-hitting all-rounder Glenn Maxwell and the swashbuckling opener David Warner were among those who finally embraced their loved ones after nearly eight weeks away from home.

Welcome home @davidwarner31 what a movement for u champ #StayHomeStaySafe pic.twitter.com/e5cTfcr0vp


Most of them had not seen their families since heading into the Indian Premier League in early April. They were flown home via a charter flight after the IPL was postponed owing to the COVID-19 pandemic.

IPL 2021 will now resume in the UAE in the middle of September.

Fast bowler Moises Henriques was photographed leaving the Marriott hotel in Sydney.
Pacer Jason Behrendorff, who plays for Chennai Super Kings in the IPL, was among those to exit quarantine.

"It was nice to know that we were getting home that's for sure," Behrendorff said.

"It’s always tough being stuck somewhere and knowing that we're able to get home was a relief and now we're out of quarantine I can't wait to get home and see my family," he added.

Maxwell was seen hugging Australian teammate Marcus Stoinis after the end of their two-week quarantine.

The BCCI paid for the charter flights and accommodation of the Australians in the Maldives and Sydney.

Many of the Australian players will not be at home for long as they have been included in a 23-man squad to tour the West Indies and Bangladesh in July and August.

Five T20Is in Bangladesh were added to Australia's upcoming touring plans as part of a jam-packed schedule that will now include 13 games in under a month.

The Australians will play the five games in Bangladesh immediately after their white-ball tour of the Caribbean and could complete them in under 10 days.