Olivier Giroud became the oldest player to score a Champions League hat-trick as he netted all four goals in Chelsea's 4-0 win at Sevilla. 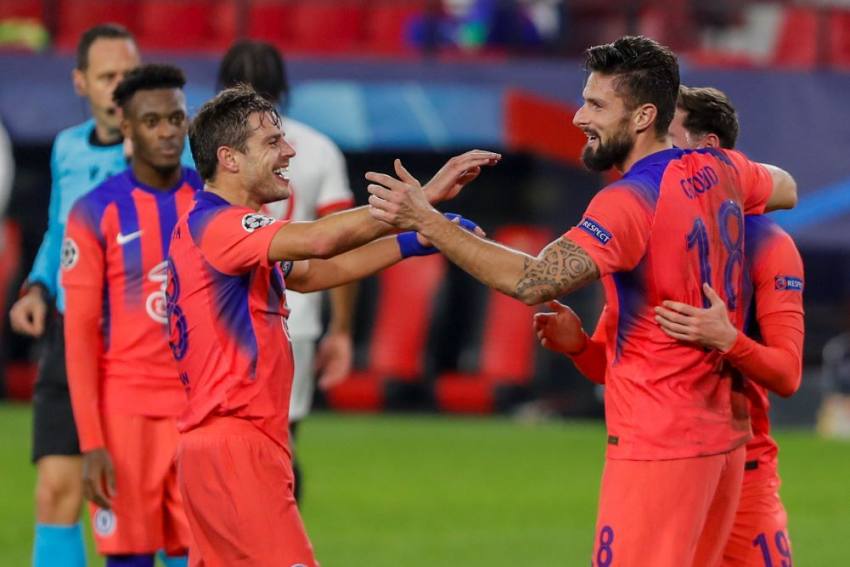 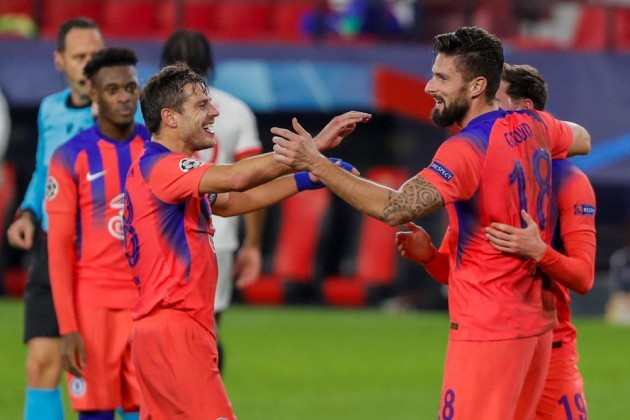 Olivier Giroud was Chelsea's match-winner for the second time in as many Champions League games as he scored all four goals in a 4-0 victory over Sevilla that clinched first place in Group E for the Blues. (More Football News)

Giroud, making his 50th start for the club, was at his clinical best as he took his tally to 10 goals in his last seven away starts in the competition and ensured Chelsea go into the round of 16 as one of eight seeded teams.

He was the beneficiary of some fine build-up play as Kai Havertz and Callum Hudson-Odoi staked their claim for more regular first-team football in an impressive performance from a changed Chelsea team.

Sevilla went into this game unbeaten in 14 home matches in all European competitions but were scuppered by Frank Lampard's hardworking side, who blocked low for long periods but attacked fluently.

After scoring with either foot, Giroud capped a fine performance with a towering header and then a penalty as he became the oldest player to score a Champions League hat-trick, at 34 years and 63 days.

4 - Olivier Giroud is the first Chelsea player to score four goals in a game since Frank Lampard in March 2010 vs Aston Villa, while he's the first to net four for Chelsea in a European Cup/Champions League game. Incredible. pic.twitter.com/p3k9sdCz9k

Havertz tested Sevilla's debutant goalkeeper Alfonso Pastor - a late addition after Tomas Vaclik pulled up in the warm-up - with a swerving cross-cum-shot in the opening minute, and the Germany international assisted the opener moments later.

He was allowed to glide through the Sevilla defence and roll the ball to Giroud, who took a touch to control it before opening up his body and finding the far corner of the net with his shot from 12 yards.

Franco Vazquez then cleared a powerful Antonio Rudiger header off the line but Chelsea found themselves pressed back in the latter stages of the first half as Sevilla tried to turn superior possession into goals.

The hosts emerged with renewed intent after the interval and Jesus Navas' audacious flick with the outside of his boot picked out Nemanja Gudelj, who half-volleyed narrowly over the crossbar from 20 yards.

But Giroud struck again on 54 minutes, latching onto Mateo Kovacic's pass before shrugging off Sergi Gomez and clipping a shot over Pastor and into the far corner of the net.

N'Golo Kante, on as a substitute, strode down the Chelsea right with 16 minutes left on the clock and landed a deft cross onto the head of Giroud, who powered the ball high into the net.

The France World Cup winner then won a late penalty from Gomez that he confidently converted into the corner of the net to complete an historic night.

What does it mean? Away form from the glory years

This was Chelsea's third consecutive Champions League away win – the club's best run on the road in the competition since they won five in a row between September 2003 and April 2004, back when Lampard was their midfield kingpin.

Giroud rolled back the years with his second Champions League hat-trick, having scored one for Arsenal against Olympiacos in December 2015.

He is Chelsea's top scorer in major European competition since the start of 2018-19 with 15 goals.

Youssef En-Nesyri scored Sevilla's winner off the bench in 1-0 win at Huesca on Saturday but he misfired here, failing to find a way through from any of his four attempts, two of which were on target.

- Chelsea have won four consecutive Champions League matches for the first time since 2011-12, when they went on to win the competition.

- Sevilla were unbeaten in 14 home matches in all European competitions coming into this game (W12 D2), with this their first such defeat since April 2018 v Bayern Munich.

- The Blues have won two Champions League games by at least four goals under Lampard - only under Jose Mourinho do they have more such wins (six).

- In what was Sevilla's 100th home match in European competition, they lost by a four-goal margin on home soil for the very first time.

- Giroud is just the second player to a score a UEFA Champions League hat-trick for two different English sides (Arsenal and Chelsea), after Michael Owen (Liverpool and Manchester United).

Leeds United visit Stamford Bridge in the Premier League on Saturday, while Sevilla entertain Real Madrid in LaLiga on the same day.