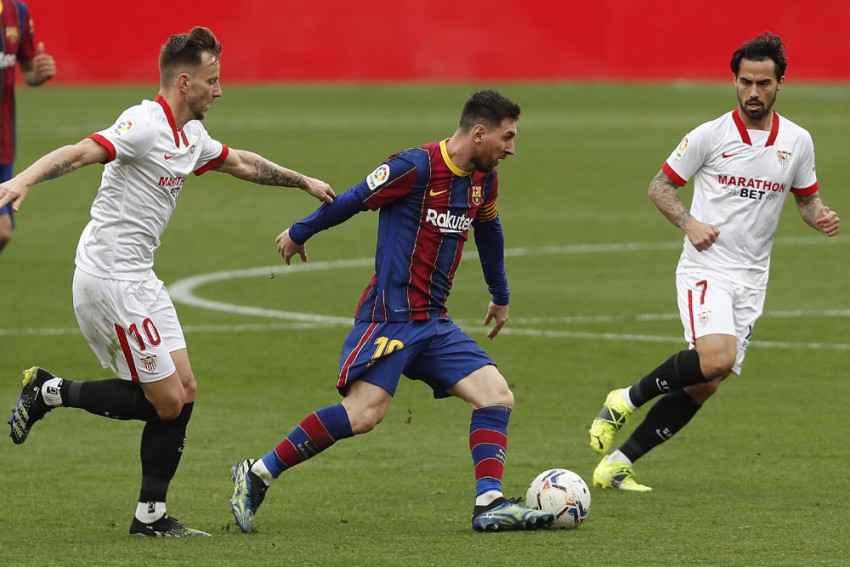 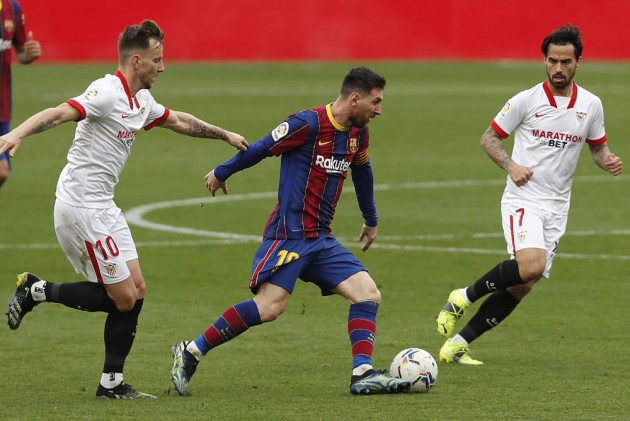 Barcelona claimed a deserved 2-0 LaLiga win at Sevilla on Saturday in the first of the sides' two crunch clashes. (More Football News)

The Blaugrana will host Sevilla in their Copa del Rey semi-final second leg in midweek but first took care of business in the league thanks to strikes from Ousmane Dembele and Lionel Messi.

A display of similar dominance will now be required at Camp Nou, as Barca trail 2-0 from the first leg of their Copa tie.

Ronald Koeman's men will certainly not be short of confidence after climbing to second, only two points behind leaders Atletico Madrid having played two games more.

3 + 1 - As @FCBarcelona player, Ousmane Dembele has scored three goals vs Sevilla, more than vs any #LaLiga opponent in all competitions, involving in four out his last six games vs Andalusian side. Favourite#SevillaFCBarca pic.twitter.com/iWSgHMjwHU

Barca had initially lacked a focal point, playing a 3-5-2 formation without a natural striker, yet their unorthodox front two combined to great effect for the opener after 29 minutes.

As Messi dropped deep to collect the ball, Dembele tore away on the shoulder of the last defender and met a pinpoint pass to fire under Yassine Bounou.

That was the only moment of real quality in a low-key first half, but Barca twice in quick succession should have added to their advantage after the break.

Sergino Dest blasted against the post when the ball broke his way following a patient move, before Dembele raced away again and teed up Messi, who blazed over.

Clement Lenglet then had a header ruled out for offside, yet Messi settled any nerves as he played a smart one-two with Ilaix Moriba and prodded in the rebound when Bounou blocked his dinked attempt five minutes from the end.

Only an apparent injury to Ronald Araujo, 15 minutes after his return to action, put a dampener on Barca's day.

What does it mean? Ideal prep for semi second leg

Barca needed a result to boost their title hopes, piling further pressure on an Atleti outfit who now have just one win in five in all competitions.

But the nature of the win was also important given their next task: beating Sevilla again. The new formation, used for the first time this season, worked once Dembele stretched the game, Barca having nine shots and five on target to Sevilla's four and two.

18 - @FCBarcelona have hit 18 woodworks away from home in all competitions this season, more than any other Top 5 European League (only four as local team). Wood#SevillaFCBarca #SevillaBarça #SevillaBarca pic.twitter.com/MAazm6t4lu

Dembele does the damage

The game did not see a single attempt until the 22nd minute when Dembele, previously playing far too deep, suddenly showed a willingness to run beyond a Sevilla defence that subsequently looked uncomfortable for the first time.

Dembele's first effort was easily held by Bounou, yet he dispatched his second, a sixth big chance of the season but only the second he has converted. He finished with three shots and also played a key pass for Messi.

Araujo out of action again?

Araujo has arguably been Barca's most impressive defender this season, but he had been out of action since prior to the semi-final first leg. His return came as a big boost on Saturday, although it was not immediately clear if his introduction came due to a problem with Gerard Pique.

The substitute soon departed, too, seemingly hurt making the only tackle he attempted during his time on the pitch. Araujo aimed a kick at pitchside equipment in his frustration and, although Koeman could also then call on Samuel Umtiti, Barca will hope this is not another lengthy lay-off.

Both teams now head to Catalonia for Wednesday's Copa clash, where Sevilla might have to show more to protect their 2-0 first-leg lead.