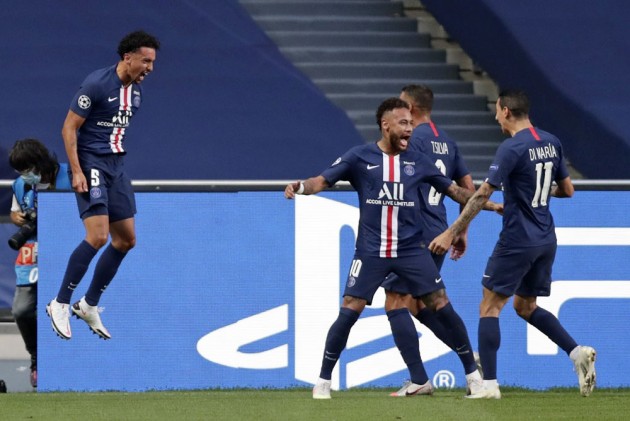 Paris Saint-Germain eased to a 3-0 win over RB Leipzig in Lisbon to reach their first ever Champions League final and remain on course for an unprecedented quadruple. (More Football News)

PSG needed two goals in stoppage time to overcome Atalanta in the last round but had far less trouble seeing off Atletico Madrid's conquerors Leipzig on Tuesday.

Angel Di Maria crossed for Marquinhos to power in the opener after 11 minutes and then profited from some sublime Neymar trickery to double his side's tally before half-time.

And the Argentinian also set up the third for Juan Bernat as PSG booked a place in Sunday's final against either Bayern Munich or Lyon, with that other semi-final to take place on Wednesday.

Neymar played a huge part in PSG's comeback against Atalanta and should have registered inside 355 seconds of this tie, only to hit the post when played clean through.

The French side were boosted by the return of Kylian Mbappe to their starting line-up and he had a half-volley correctly ruled out a minute later for a handball against Neymar.

However, Leipzig could not settle and Thomas Tuchel's side were in front soon after when Di Maria's wicked delivery was guided in from six yards by an unmarked Marquinhos.

Neymar again clipped the post from a free-kick but he brilliantly set up Di Maria for PSG's second with a cushioned flick after Peter Gulacsi's pass was intercepted.

Leipzig brought on Emil Forsberg and Patrik Schick at half-time and started the second half on top, but Bernat met Di Maria's cross to head past Gulacsi and kill things off.

PSG had numerous chances to add a fourth in the remainder of the one-sided affair, with Mbappe squandering a good chance and then being denied by Gulacsi, who also produced a late double save to keep out Di Maria and Leandro Paredes.

What does it mean? Quadruple dream still alive for PSG

Nine years on from their Qatari takeover, PSG are now just one step away from winning the one trophy that has so far eluded them and the one they truly crave  - the Champions League.

Having won a domestic treble of Coupe de France, Coupe de la Ligue and Ligue 1, plus the Trophee des Champions, this is shaping up to be the most famous season in the club's history.

PSG may have missed Mbappe for three-quarters of their tight tussle with Atalanta yet the absence of Di Maria in that one cannot be understated.

He returned from suspension here and played a part in all three goals, taking his assists tally to 27 in the competition since his debut in September 2007 - only Cristiano Ronaldo and Lionel Messi (32 each) have more.

PSG looked dominant but undoubtedly were helped by some sloppy play from their opponents, with no error more glaring than Gulacsi's hospital pass in the lead up to the second goal.

The Leipzig keeper pretty much played the ball straight to Paredes, who fizzed it into the path of Neymar to tee up Di Maria with a superb flick.

PSG have reached their first ever European Cup/Champions League final; this was their 110th game in the competition - the most played by a side before reaching their first final, overtaking Arsenal's record of 90 between 1971-2006.

PSG will be the fifth different French side to appear in a European Cup/Champions League final and the first since Monaco in 2003-04. Only Italy, Germany (6 each) and England (8) have had more different clubs appear in the final of the competition.

No side has ever scored in more consecutive matches in major UEFA competition than PSG's current run of 34 (level with Real Madrid between 2011-2014 in the UEFA Champions League). The last side to stop the Parisians scoring were Man City back in April 2016 (0-1).

Marquinhos has scored in back-to-back UEFA Champions League games for the first time since October 2013 (his first two appearances in the competition).

Di María is unbeaten in all 17 UEFA Champions League matches he has scored in (W15 D2 L0 – 21 goals in total) – only Mohamed Salah (18), Gonzalo Higuaín (21) and Patrick Kluivert (25) have scored in more games without defeat in the competition's history.

Neymar has been directly involved in 59 goals in 59 UEFA Champions League games (35 goals & 24 assists), including 23 goal involvements in 19 appearances for PSG (14 goals & 9 assists).

PSG can now prepare for Sunday's showpiece final at this ground, where either German champions Bayern or domestic rivals Lyon await.