Leicester City equalled the 24-year-old record for the biggest ever Premier League victory as 10-man Southampton were dismantled 9-0 at St Mary's. 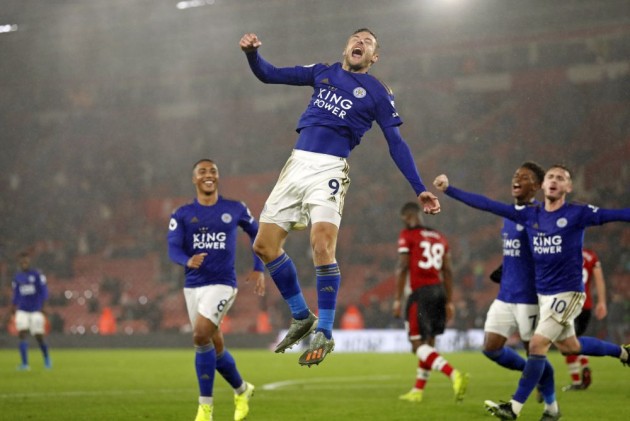 Perez, a close-season signing from Newcastle United, was fouled in the build-up to Ben Chilwell's 10th-minute opener – an incident that saw Ryan Bertrand sent off after a VAR review.

Ralph Hasenhuttl's home side failed comprehensively to deal with their numerical disadvantage as the goals rained in amid a torrential downpour on England's south coast – Youri Tielemans scoring number two before Perez's first Leicester goal set him on the way to a share of the matchball.

The goals flooded in, and James Maddison's superb free-kick made it 8-0 – which at the time matched the biggest margin of away victory in Premier League history.

Leicester went one better still when Vardy won and converted a stoppage-time penalty, to bring the Foxes level with Manchester United's 9-0 shellacking of Ipswich Town in March 1995.

Tielemans was given too much room to pick out a finish in the 17th minute and the Belgium midfielder then laid the ball on for on Perez to beat Gunn tamely at his near post once more.

Perez caught Yan Valery napping as he tidily dispatched Chilwell's cross on the half-volley, while Leicester's England left-back was again the provider when Vardy lashed into the top corner to make it 5-0 at the break.

A relatively uneventful opening to the second half crashed down around Southampton when Perez chested down Harvey Barnes' pass to lash a volley beyond Gunn in the 57th minute and Vardy headed home a minute later.

Jan Bednarek typified the efforts of the Southampton defence with fouls on Vardy in the 85th minute and stoppage time that led to goals eight and nine.

The Saints languish in 18th position and face the daunting prospect of back-to-back trips to Manchester City in the EFL Cup and Premier League next week.

Pep Guardiola's team are now the only side with more top-flight goals than Leicester's 25 this season, with Brendan Rodgers' men edging above the champions into second place.