Defending champions Mohun Bagan were held to a goalless draw by East Bengal in today's Calcutta Football League fixture, at the Salt Lake Stadium. Here are the highlights of MB Vs EB. 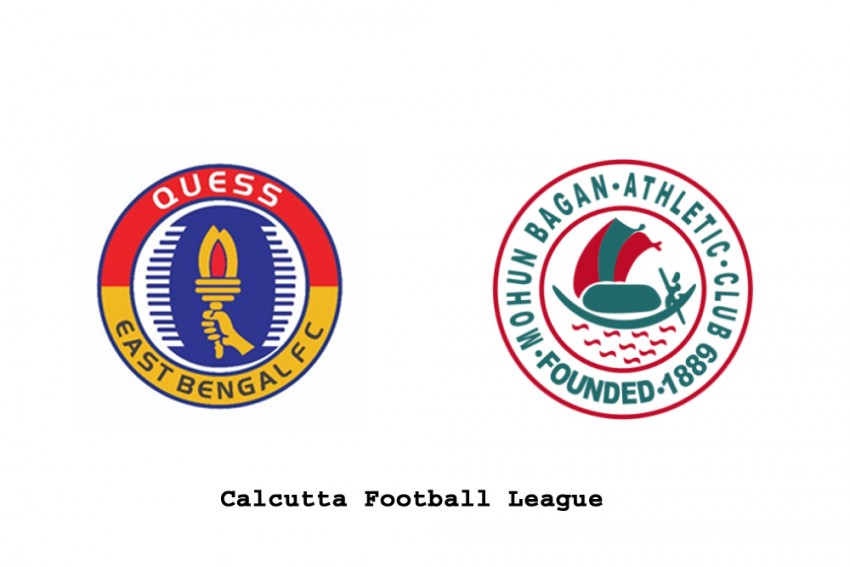 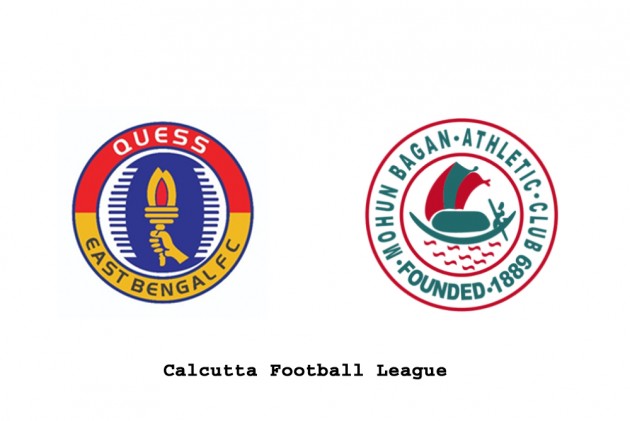 Defending champions Mohun Bagan were held in a stalemate by resurgent East Bengal in today's Calcutta Football League fixture, at the Salt Lake Stadium. Kibu Vicuna's side did enough to prevent EB's Alejandro Menendez a hattrick of Kolkata Derby victories. Marti Crespi was the main star for East Bengal, preventing atleast one goal through his defending skills. Meanwhile, EB attackers missed a host of opportunities created by pacy winger Pintu Mahata. Mohun Bagan dominated the attacking proceedings throughout the match, and could have walked off as the winners but poor luck was on their side today. Here are the highlights of the 2019 CFL match between Mohun Bagan and East Bengal.

16:58 hrs IST: FT' The referee blows the whistle for full-time. It is a point each for East Bengal and Mohun Bagan.

Bagan were brilliant while attacking, meanwhile East Bengal were excellent while defending. The game had everything from skills to end-to-end action, but it just didn't have a goal.

What a delivery from Beitia, but Jesuraj just couldn't get a touch to it. That was so close!

16:56 hrs IST: 91:33' Although both teams have come close to breaking the deadlock, the pressure has been to much to capitalize on those chances for both sides. Can someone find the winner now?

It has been a good game for the youngster. He almost registered an assist too.

16:46 hrs IST: 82:00' Aidara has been excellent for East Bengal today. He has hardly allowed Beitia to do anything for Mohun Bagan.

If EB wins the game, it will be all because of his tireless work ethic.

The former Chennai City man could be the difference for his side, with electrifying pace. But East Bengal is keeping him restricted.

Captain Ralte takes the set-piece for East Bengal and floats it in, but Colado just can't reach it amidst the massive uproar in Salt Lake Stadium.

Colada and Bidyasagar come in, and replace Marcos, Ronaldo.

EB appeal for one, but the referee ignores them. Gurjinder pushed Ronaldo inside the box, and he seems to be relieved.

A good cross by Mallick, but the header by Gonzalez didn't have the power to do anything.

Pintu Mahata did the right thing. He put in a shot-cum-low cross for Ronaldo, who was ran right next to the Bagan goal post. But the new arrival simply taps it straight at Debjit, who puts in a fine save!

The best chance of the match gets wasted by VP Suhair. A brilliant cross by Mehta, with Suhair just needing to tap it in, but he misconnects awfully.

Oh that was a tricky cross! The EB captain attempted a cross probably, but it suddenly curled and went wide off goal! Had it turned more, it could have given East Bengal the lead in this match.

16:22 hrs IST: 57:55' Ralte is finally coming to life in this match. He was pretty silent in the first half. But now he is simply oozing confidence and leading East Bengal. Some good touches from the captain!

16:20 hrs IST: 56:08' Good sliding tackle from Gurjinder on Mahata. If he was left alone, he could have put in a threatening cross for Marcos.

16:15 hrs IST: 54:00' It looks like Santos and Bidyasagar could come in for East Bengal. The duo are currently warming up in the sidelines.

Menendez hoping to change the game via his super-subs?

16:12 hrs IST: 47' Fine freekick from Ralte, but Bagan deal with it properly. A good start to the second half!

Mohun Bagan looked to be the better side right now, with East Bengal having to defend continuously.

15:51 hrs IST: HT' Here goes the whistle for half-time, its nil-nil at the Salt Lake Stadium.

Mohun Bagan had a brilliant first half, but East Bengal kept the scoreline leveled due to some brilliant defending by Crespi.

15:47 hrs IST: 42:13' VP SUHAIRRRRRR! He runs forward with the ball, but shoots it straight at the East Bengal goalkeeper, from outside the box.

15:45 hrs IST: 40:00' Another chance for Marcos, who runs in between Morante and Girjinder, but fails to create something threatening for East Bengal. Marcos needs to improve in this match. He has been involved in some good moves created by his teammates, but his touch is letting him down.

Marcos just couldn't connect with it. A comfortable catch for Debjit.

An excellent cross by Brandon from the left flank put Marcos in a clear situation to score via a header, but he tried to set it up for Ronaldo and failed!

15:34 hrs IST: 27:18' A lovely nutmeg by Beitia. A true magician in the middle of the park! Since his arrival, Beitia has become the main fulcrum for Bagan. Every move starts by him, and he is also their main set-piece taker.

15:31 hrs IST: 23:55' Mehta puts in a brilliant cross, and its chaos inside the East Bengal box. A good clearance header by Mehtab. Can Bagan gain some momentum in this match?

15:25 hrs IST: 22:00' EAST BENGALLLLL!!! Oh goodness! Some good work by Pintu Mahata, who creates some problem for Bagan's high backline but his cross for Ronaldo was way too poor!

15:19 hrs IST: 14:40' Aidara needs to keep his cool, as he forces a foul on Chullova! The midfielder has been way too aggressive. Free-kick to Bagan.

Another inswing floater by Beitia! Chance for MOHUN BAGANNNN!!! Gonzalez heads it wide. East Bengal is feeling the pressure now!

15:15 hrs IST: 12:20' Fine cross by Chullova, and Suhair attempts a header. Good catch by East Bengal's Ralte! The opening stages of the game has been complete end-to-end action! Will we see a first half goal?

Decent move by Ronaldo. He steals the ball and then uses his pace to create something for East Bengal. He cuts in but attempts a tame effort from outside the box which goes wide.

A fiery start to the game!

Mallick tried to find a way past Crespi and put in a cross, but the latter stole the ball and was on the receiving end of a foul by the former. Good physical battle!

15:07 hrs IST: 04:36' Mohun Bagan have begun to dominate the game, with few slick passes and changing wings. East Bengal will be aiming to catch them at the counter and maybe do something.

East Bengal gaffer Alejandro Menendez will be aiming to make it a hattrick of Kolkata derby wins. Meanwhile, Mohun Bagan's Kibu Vicuna will aiming to grab his first derby win.

15:04 hrs IST: 01:47' In swing freekick by Beitia. Morante almost opened the scoring for Bagan but a poor header by the defender. He tried setting it up for a teammate, but the area was just way too crowded in the East Bengal box.

15:00 hrs IST: And its kick-off. Both teams will be gunning for glory in this mega-match. Who do you think will win today? Mohun Bagan? Or East Bengal?

14:57 hrs IST: Players from both the teams have walked into the field amidst the uproar from fans!

It is a big match indeed! Mohun Bagan Vs East Bengal, a match between two legacy Indian football clubs! The Kolkata Derby is a match, where a player can go down in history, or he can completely lose his career. Game on!

14:49 hrs IST: Mohun Bagan will be heavily dependent on Beitia. The Spanish midfielder's flair totally stands out on the pitch and could come handy with his set-piece deliveries. Also, VP Suhair will be aiming to score a goal at least and to gain some momentum.

14:21 hrs IST: Eyes will be on East Bengal's Pintu Mahata. The 22-year-old winger is highly regarded in West Bengal, and recently left Mohun Bagan for their local rivals. A tricky and pacy winger, Mahata could be his side's main player today. 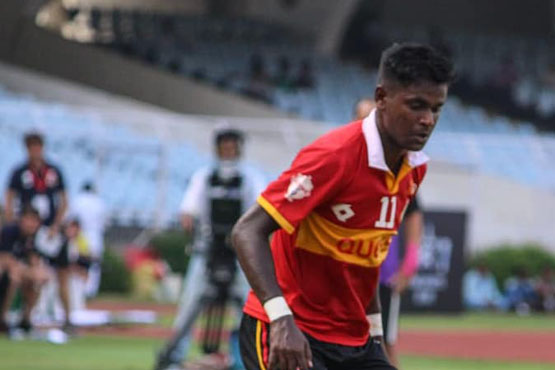 14:17 hrs IST: The Mariners also faced heartbreak in the Durand Cup, when they lost to Gokulam Kerala in the final. Also, in the CFL table, Bagan have a lot of work to do, meandering at a lowly ninth position. Meanwhile, East Bengal is fourth in the standings.

14:14 hrs IST: The Red and Gold Brigade have revealed their team sheet for today's fixture.

14:11 hrs IST: After having faced a semifinal defeat in the recently concluded Durand Cup semifinals to Gokulam Kerala, East Bengal will be hoping to put that behind and register a big-match victory over eternal rivals Mohun Bagan.

13:54 hrs IST: Hello and welcome to Outlook's live coverage of the mouth-watering clash between Mohun Bagan and East Bengal.