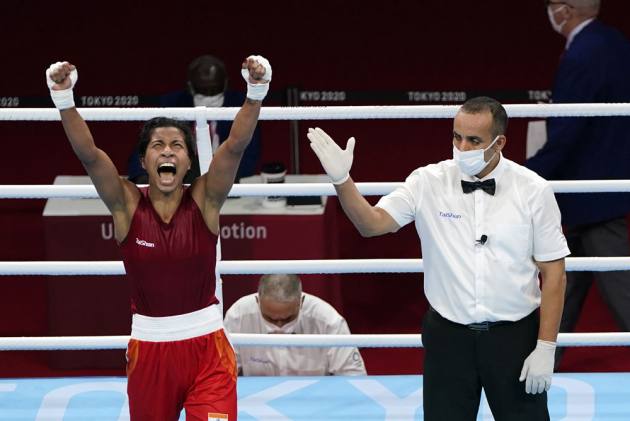 India rejoiced after Lovlina Borgohain on Friday assured the country of its second medal at the Tokyo Olympics with Sports Minister Anurag Thakur and shooting ace Abhinav Bindra joining others in sending the young boxer congratulatory messages.

Debutant Borgohain (69kg) assured India of their first boxing medal at the ongoing Games when she upstaged former world champion Nien-Chin Chen of Chinese Taipei to enter the semifinals.

"Lovlina has entered the Semi Finals ! Well done @LovlinaBorgohai , what an amazing news for India to wake up to today! We've been glued to the tv screen watching you in action!," Thakur wrote on his Twitter handle.

Assam Chief Minister Himanta Bisaw Sarma was one of the first to congratulate the boxer, who comes from the northeastern state's Golaghat district.

"This is a BIG punch. You continue to make us proud LovlinaBorgohain and keep India's flag high & shining at TokyoOlympics2020. Well done," Sarma said.

Former sports minister Kiren Rijiju too sent her his congratulations.

"India is confirmed of 2nd Olympics medal. What a lovely Boxing from Lovlina. LovlinaBorgohai has reached semi-finals and looking for Gold medal in Tokyo2020 Olympics!" Rijiju wrote.

The 23-year-old Assam boxer won 4-1 to make the last-four where she will square off against reigning world champion Busenaz Surmeneli of Turkey, who hammered Ukraine's Anna Lysenko in her quarterfinal bout.

Borgohain, a two-time world championship bronze-medallist, displayed tremendous calm in the face of a plucky opponent, who had beaten her in the past.