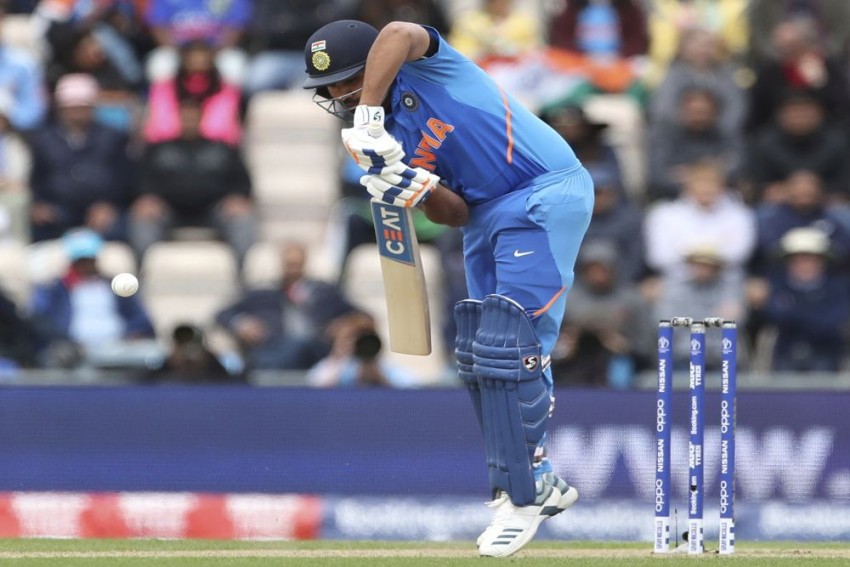 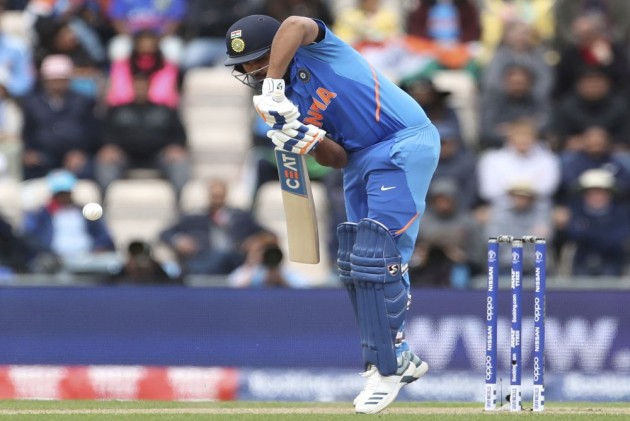 India beat South Africa by six wickets in their opening match of the 2019 Cricket World Cup at The Rose Bowl, Southampton on Wednesday. After opting to bat first, the Proteas couldn't get a partnership going and were restricted to 227/9. Yuzvendra Chahal took four wickets, while Jasprit Bumrah and Bhuvneshwar Kumar scalped two apiece. In reply, Rohit Sharma's unbeaten century helped India cross the finishing line with 15 balls to spare. This was South Africa's third consecutive loss in the tournament. Get highlights of India vs South Africa here (SCORECARD | BAN vs NZ | POINTS TABLE | FULL SCHEDULE)

Rohit Sharma, Man of the Match: "Different experience from India. There was something in it for the bowlers through the game, so you had to play out the overs initially and see what the ball was doing. Couldn't play my natural game. You have to take your time. Certain shots that I like playing, I had to cut out and play close to the body, and follow the basics properly - try and leave as many balls as possible on a pitch that is doing a bit. Building partnerships were key in this chase. It was a small total, but since there was something in it for the bowlers, it was tough and we needed partnerships. It's the batsmen's job to get the job done, whoever is out in the middle. We can't rely on one of two individuals all the time."

21:51 hrs IST: FOUR! Back of a length delivery from Phehlukwayo and Rohit times it straight over the bowler for a boundary. Moves to 94. India are 158/3 after 37 overs.

21:16 hrs IST: FOUR! Too wide from Tahir, Rohit gets into position and cuts it later in the gap between backward point and short third man. India are 123/2 after 29 overs.

20:02 hrs IST: South Africa continue to keep the scoring rate down, but they needs wickets. India are 39/1 after 12 overs.

19:44 hrs IST: SIX! Short ball from Rabada, down leg, Rohit pummels it over wide fine leg boundary for a maximum. Costly over from the South African, 15 runs off it. India are 29/1 after 8 overs.

19:35 hrs IST: OUT! Dhawan finds an edge and De Kock completes an easy catch behind the stumps. First wicket for Rabada. He totally deserves it. Virat Kohli comes to the crease. India are 14/1 after 6 overs.

19:22 hrs IST: FOUR! Short of length from Morris and Dhawan pulls it to deep square leg for his first boundary of the day. India are 10/0 after 3 overs. Rabada to continue.

19:16 hrs IST: Good start from Rabada, troubles both openers. India are 4/0 after 2 overs. Chris Morris comes into the attack.

19:13 hrs IST: Single off the last delivery for Dhawan, towards mid-off. India are 3/0 after the first over. Kagiso Rabada comes into the attack.

18:41 hrs IST: That's it. South Africa finish on 227/9. What a performance from the Indian bowlers! Right on the target from the word go. Join us in about 25-30 minutes for India's response.

18:29 hrs IST: Nine runs off Bhuvneshwar's ninth over. South Africa are 218/7 after 48 overs. Bumrah to bowl the penultimate over.

18:24 hrs IST: FOUR! Low full toss from Bumrah and Morris smacks it through extra cover. South Africa are 209/7 after 47 overs.

18:02 hrs IST: SIX! Too short from Chahal, down leg, Morris rocks back and smashes it over backward square leg for a maximum. South Africa are 173/7 after 42 overs. Pandya comes back into the attack.

17:54 hrs IST: WICKET! Dhoni doesn't miss such stumpings. Phehlukwayo departs for 34. Fourth wicket for Chahal. Can he take a five-wicket haul in his first-ever World Cup match? South Africa are 161/7 after 40 overs.

17:09 hrs IST: FOUR! Fuller delivery from Bumrah, on Miller's pads, the South African flicks it past the fielder at mid-on for a boundary. South Africa are 118/5 after 29 overs.

16:45 hrs IST: OUT! Another wicket, this time from Kuldeep. Gets Duminy. South Africa are 89/5 after 23 overs. Andile Phehlukwayo comes to the crease.

16:33 hrs IST: DOUBLE-STRIKE! And leg-spin does the trick for India. Chahal gets the better of Dussen and Du Plessis in the space of six deliveries. Proteas in all sorts of trouble now. David Miller and JP Duminy at the crease. South Africa are 80/4 after 20 overs.

16:26 hrs IST: Three singles off Pandya's fifth over. South Africa are 78/2 after 19 overs. Time to bring in Kedar Jadhav into the attack?

16:19 hrs IST: Six runs off Pandya's fourth over. South Africa are 71/2 after 17 overs. Yuzvendra Chahal comes into the attack.

16:04 hrs IST: FOUR! Short and wide from Kuldeep and Dussen smacks it through cover for his first boundary of the day. South Africa are 48/2 after 14 overs.

16:01 hrs IST: Another tidy over from Pandya, just three off it. South Africa are 43/2 after 13 overs. A couple of wickets and the Proteas will be under tremendous pressure.

15:53 hrs IST: Solid start from Pandya, only three runs off his first over. South Africa are 37/2 after 11 overs. Another change. Some spin now. Kuldeep Yadav comes into the attack.

15:43 hrs IST: This is splendid from Bhuvneshwar. Du Plessis struggling to find his timing. South Africa are 32/2 after 9 overs. Seems like Bumrah is in for a long spell.

15:34 hrs IST: FOUR! Fuller delivery from Bhuvneshwar and Du Plessis flicks it through mid-wicket for a boundary. South Africa are 30/2 after 7 overs.

15:29 hrs IST: OUT! Good length delivery from Bumrah, De Kock looks to hit it towards cover but gets an outside edge and Kohli does the rest at third slip. Another impressive over from Bumrah, a wicket and just four runs. South Africa are 26/2 after 6 overs. Rassie van der Dussen comes to the crease.

15:23 hrs IST: FOUR! Length ball from Bhuvneshwar, De Kock looks to flick it away but gets a leading edge and it runs down to the third man. Seven off the over. South Africa are 22/1 after 5 overs. Bumrah again.

15:15 hrs IST: OUT! First wicket for Bumrah in World Cup. Amla gets a thick outside edge and Rohit Sharma completes a neat catch at second slip. South Africa captain Faf du Plessis comes to the crease.

15:12 hrs IST: FOUR! Length ball from Bhuvneshwar and Amal hits it past point for his first boundary of the day. Bhuvneshwar finishes with a dot ball. South Africa are 10/0 after 3 overs.

15:08 hrs IST: Magnificent start from Bumrah, just two runs off his first six balls. No margin of error. Get a feeling something is going to happen here. South Africa are 4/0 after 2 overs. Bhuvneshwar to continue.

15:04 hrs IST: Little bit of seam movement for Bhuvneshwar. Great start from the Indian. South Africa are 2/0 after the first over. Jasprit Bumrah comes into the attack.

15:01 hrs IST: Back of a length delivery from Bhuvneshwar and Amla works it to third man for a single. First runs of the day for the South African.

14:46 hrs IST: Quinton de Kock averages 64.5 against India and has hit a half-century in six of his previous eight ODI innings.

14:32 hrs IST: South Africa have won the toss and have opted to bat.

14:05 hrs IST: Toss in 25 minutes. Meanwhile, Sri Lanka recovered from a dramatic batting collapse to knock over Afghanistan for 152 and seal a 34-run win in the 2019 World Cup match at Cardiff on Tuesday.

Faf du Plessis: "For myself, it's really important to stay strong. The team will feed off my energy and they will look up to the leadership group in the team. But I'm at the top of that so it is important that I stay positive, I stay strong, make sure I keep motivating the guys."

Virat Kohli: "Whether a team has played before or not, it really wouldn't matter on the day. It depends on how the side turns out, what kind of mental set-up they have and we have to be mentally and skilfully stronger than the opposition whoever we play to win on the day, so I think our focus will be that."

13:53 hrs IST: India have won six of their last seven ODIs against South Africa, although they lost their previous three ODIs against Australia back in March.

13:44 hrs IST: Beuran Hendricks has been called up to replace Dale Steyn, but the left-arm quick will not face India. Hashim Amla could return, having been left out against Bangladesh as a precaution after being struck on the helmet by Jofra Archer.

13:40 hrs IST: BIG NUMBER - The Proteas have won two of their previous three ODI matches at The Rose Bowl, while India have lost two of their three.

13:37 hrs IST: STAT ATTACK - South Africa have lost back-to-back games in the same World Cup for just the second time in their history. They have never lost three in succession within the same tournament.

13:24 hrs IST: Hello and welcome to Outlook's live coverage of the 2019 Cricket World Cup encounter between India and South Africa.

India have had adequate rest. Almost all other teams have already played two games each and Kohli’s side will look to kick-start its campaign with a rousing performance.

The clash couldn't possibly have been more well-timed as India have a chance to hold the Proteas by the scruff of their neck when they are seemingly at their weakest. Dale Steyn has been ruled out of the tournament with a shoulder injury, while fellow paceman Lungi Ngidi (hamstring) will play no part in Southampton.

It’ll be interesting to see whether India decide to go with four seamers and a spinner or three seamers and two spinners. KL Rahul is expected to take the No. 4 slot but it remains to be seen as to how well he performs when the condition are tough to bat.

Kedar Jadhav, who didn’t take part in both the warm-up games due to a shoulder injury he sustained during the IPL, is fit for the opener.