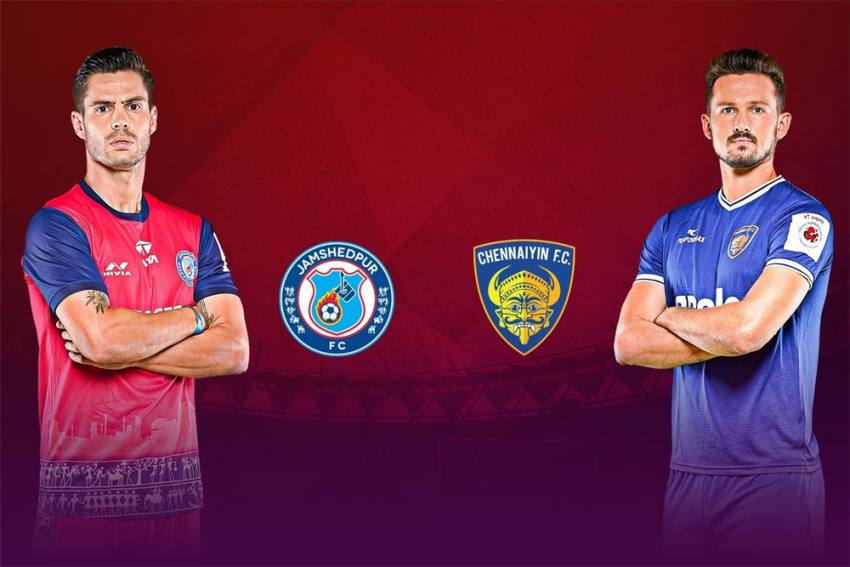 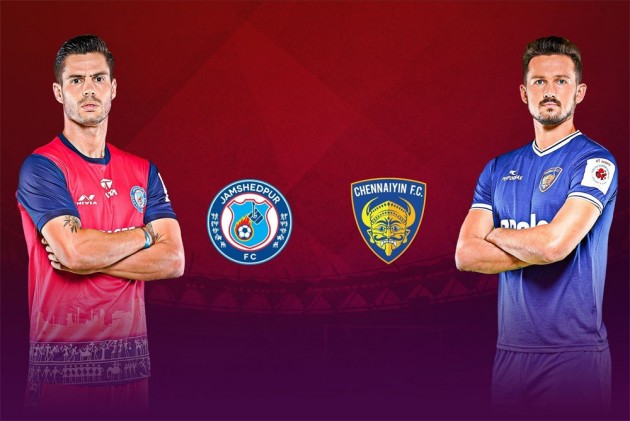 A thriller at the Furnace! Jamshedpur got extremely lucky to share the spoils with visiting Chennaiyin FC in the 35th match of Indian Super League (ISL) 2019-20 . Isaac Vanmalsawma scored the equaliser which should not have stood after the ball hit the arm of Farukh Choudhary. No chance for Vishal Kaith as the ball took a massive deflection. That's how the match ended at Jamshedpur. But the day started well for Chennaiyin FC with new manager Owen Coyle taking his ISL bow. Nerijus Valskis scored the opener from a brilliant team play. But credit to young Anket Jadhav, who rocked the visiting defenders after coming on as a substitute, with his skill and pace. He started the move that resulted in that controversial goal.

90+7' - A sliding tackle from Eli Sabia and free-kick for Jamshedpur, then from the set-play, Aniket Jadhav goes with a drill. It hits Farukh Choudhary inside the box, again and gets deflected. It could have been another Choudhary deflection goal. That's all.

90+5' - And Dragos Firtulescu is stretchered off.

90+2' - Free-kick for Jamshedpur inside the attacking third. A throw-in from the set-play. A long-throw from Narender Gahlot and an easy take for Vishal Kaith. Moments ago, during the goal protest, Chennaiyin skipper Lucian Goian was booked.

90' - Jamshedpur continue to press hard for a late winner. Six minutes added on.

89' - A free-kick for Jamshedpur some 18 yards away from the goal, courtesy a handball. Farukh Choudhary makes a good run through the wall, but brilliant defending from the visitors. Then, Aniket Jadhav makes a mazy run then sets up Isaac Vanmalsawma, who takes a left-footed shot at the goal. And what, it gets deflected from the outstretched hand of Farukh Choudhary and GOAL given. What a shame.

83' - Another change for Chennaiyin. Rafael Crivellaro is replaced by Dragos Firtulescu.

80' - Lallianzuala Chhangte losses possession in the centre. But Chennaiyin end up winning a free-kick, and from Lucian Goian's delivery, Lallianzuala Chhangte gets a free run and sends in a cross. But it fails to find just arrived Andre Schembri in front of the open goal. Little too heavy. It was game over. Just needed a tap in. Schembri's on for Thoi Khangebam.

78' - Narender Gahlot on a good run and wins a throw-in. His throw-in reaches the box, Chennaiyin skipper Lucian Goian climbs tall to clear the ball with a firm header.

76' - Anirudh Thapa gets a nasty tackle and is down. Aitor Monroy is lucky not to have a card. Showing studs and lunging, that's red.

74' - Thoi Khangebam is also having cramps after leaping to avoid a sliding tackle in the attacking third. Jamshedpur still pressing hard for the equaliser.

72' - Aitor Monroy links up with new man Isaac Vanmalsawma, who sends in a curler. But Vishal Kaith saves it.  Corner. From the following play, Aniket Jadhav drills in on from just outside the box. It misses the target, by a whisker. And sub for Chennaiyin. Germanpreet Singh on for Masih Siaghani. The Afghani's having hamstring issues.

68' - Another dangerous move from Chennaiyin. Rafael Crivellaro gets a good ball from Edwin Vanspaul, and beats Memo Moura on the run. But his final effort is blocked.

66' - A quick move from Chennaiyin, and win another corner. Masih Saighani's delivery finds Edwin Vanspaul inside the box, but Tiri makes up by clearing the ball.

64' - Jamshedpur on with another wave of attacks. Aniket Jadhav tries a long ranger and Vishal Kaith concedes a corner. Moments ago, they made another sub. Isaac Vanmalsawma on for CK Vineeth.

60' - Jamshedpur wins a free-kick near the Chennaiying box. CK Vineeth wins the ball inside the box and tries to beat two markers, but fails. At the opposite end, Chennaiyin get a chance to test the hosts defenders.

57' - Thoi Khagenbam sends in a cross but finds Tiri, who clears it. Throw-in for Chennaiyin. And a counter attack for  Jamshedpur catch themselves off-guard. But Eli Sabia's off-side trap works. He's the last defender and lucky to have escaped with unpunished.

55' - Memo Moura uses his physicality to beat Edwin Vanspaul and wins a header. Now, Chennaiyin are having their own run.

53' - Robin Gurung on the run, but he is outsmarted by Lallianzuala Chhangte, who's tracking back. Jamshedpur continue to keep possession, and a cross. Thoi Khangebam clears it away. Good defending work from Chennaiyin.

50' - Jamshedpur in control of the proceedings now despite a goal down. Tiri finds Farukh Chaudhary with a long ball to start a move. But the final delivery from the far corner hits the side netting.

49' - Jitendra Singh tries to weave his magic, but fails. Then, Rafael Crivellaro gets a booking for a lunge on Lucian Goian.

47' - Substitution for Jamshedpur. Aniket Jadhav in for Mobashir Rahman. And Jadhav gets into the thick of the action. Goes for an acrobatic, cycle kick. Fails to hit the target.

8:24 PM IST: A marked difference in Chennaiyin FC's overall approach to the game, and they got the lead, courtesy a sublime finish from Nerijus Valskis. May be that's what they call the new manager syndrome. After losing seven matches on the road, the two-time champions found themselves leading at the Furnace. A reason for smile for Owen Coyle. Lallianzuala Chhangte was brilliant -- his runs, crosses and positioning. For the hosts, Farukh Choudhary continues to be the leading man. But in the absence of Sergio Castel, and also Tiri, Jamshedpur are missing the bite. By the way, they just lost their third foreigner in Noe Acosta. Feared, a dislocated shoulder.

45' - Brilliant defending from Eli Sabia to cut short a Jamshedpur move. A high ball, and Sabia beats the attacker with a timely run. But Jamshedpur continue to press hard. But on the counter, Lallianzuala Chhangte releases one for the goalscorer Nerijus Valskis, and timid attempt to end the move. Two minutes added on.

44' - Jamshedpur are having the better of midfield exchanges. Rare mistake from Farukh Choudhary. He tries to tap the ball beat a sliding Lucian Goian at the edge of Chennaiyin box, but fails. Misses the ball completely.

41' - Jamshedpur with another brilliant move. Farukh Choudhary sends in a good cross but not a single Jamshedpur player inside the box. On the counter, Lallianzuala Chhangte beats a couple of Jamdshedpur players on the run and sends minuses. He overcooks it. Clearance for Jamshedpur.

39' - Jamshedpur are already missing their top-scorer Sergio Castel and Piti. Meanwhile, throw-in for Jamshedpur inside the attacking third. Throw-in from Narender Gahlot and some frenetic defending from the visitors. Then another wave of attacks from Jamshedpur. Aitor Monroy finds Farukh Choudhary on the run with a brilliant long ball, then a goalmouth melee. Chenniyin captain makes the clearance, a sliding clearance.

36' - Yellow card for Masih Saighani, for a foul on Noe Acosta. The Jamshedpur player falls awkwardly and is substituted. Shoulder injury. Dislocation. Replaced by Jitendra Singh.

32' - Free-kick for Chennaiyin just outside their own box. Goalie Vishal Kaith takes it, a long ball. Then, Mobashir Rahman concedes a free-kick in a dangerous era. Chennaiyin win a corner from it. In the build-up, Lucian Goian is caught by a defender's elbow. Rafael Crivellaro's delivery is headed away by captain Tiri.

26' - GOAL! Thoi Khangebam controls a long ball, then sends in a brilliant ball for Rafael Crivellaro, who sets up Nerijus Valskis for the opener. Stunning turn and finish from the Lithuanian. Hits the far post and the ball rolls in. First attempt and goal. Owen Coyle era starts for Chennai.

24' - Lallianzuala Chhangte dispossessed inside the attacking half and Farukh Choudhary tries to find CK Vineeth on the counter but is cut short by an alert Chennaiyin defender.

23' - Poor play from Nerijus Valskis. Chennaiyin get a throw-in and Valskis, outside Jamshedpur box, tries to find a fellow attacker with his header. But too early a play from him.

19' - Masih Saighani tackles Robin Gurung, and the Jamshedpur player is limping out. But is fine.

17' - Then, Jamshedpur get their own chance with Neo Costa sending a cross for Farukh Choudhary. But good defending from Tondonba Ngasepam to deny Choudhary a shot at the goal.

16' - Eli Sabia blocks a jumping Sumeet Passi in the centre. From the following play, Lallianzuala Chhangte gets a brilliant run on the left flank and sends in a cross but Thoi Khangebam is late to arrive. Great chance.

13' - Farukh Choudhary starts another move on the left flank, then from the right, CK Vineeth tries to beat Vishal Kaith. Tight angle, and out of play.

11' - Little play between Farukh Choudhary and Mobashir Rahman to test the Chennaiyin defence, but Lucian Goian makes the all-important clearance.

9' - A corner for Jamshedpur from a Noe Acosta run with Eli Sabia getting the last touch. Then, Chennaiyin start their own move. After a few exchanges in the centre, Sumeet Passi releases a long ball for Farukh Choudhary. But Vishal Kaith beats the onrushing player and clears the ball.

4' - Good start from Chennaiyin. A through ball from captain Lucian Goian but Subrata Paul leaves his line and clears the threat away.

3' - Throw-in for Chennaiyin, in whites, after a Jamshedpur move go out out of play at the attacking third. From the throw-in, Lallianzuala Chhangte gets a good run, only to settle with a throw-in. A long throw from Tondonba Ngasepam and a corner. Nothing off it.

1' - Referee Crystal John blows the whistle to announce the start match. Jamshedpur FC start the proceedings from the centre, from left to right.

He had previously managed English Premier League (EPL) teams -- Burnley and Bolton Wanderers -- and is credited with getting the former promoted to England's top-tier in 2009.

Tonight, Coyle takes his ISL bow.  And the big question is, what will he do? Short time to prepare and a crestfallen team to revive. Tough job!

7:00 PM IST: Two changes for Jamshedpur from their last match. Mobashir Rahman and Sumeet Passi in for Jitendra Singh and Sergio Castel respectively. Owen Coyle, the new Chennaiyin boss, has named an unchanged starting XI played out a draw against Odisha FC.

Antonio Iriondo's side have registered two wins and two draws at home this season. Also, Jamshedpur FC are currently fourth in the standings, with 11 points from six matches. The Spaniard will be expecting his side to continue their fine run, but he will be without the services of Sergio Castel. Castel has scored five goals but is currently recovering from an injury. Meanwhile, Piti also won't be part of the squad.

Ahead of the match, Iriondo stressed that he trusts his players and is hopeful of them continuing with their momentum. "We are going to keep trusting our players and the work they have done. I'm very happy with the situation at the moment. We have lost two of our foreign players (Sergio Castel and Piti) but the team is still performing good. I hope we continue with this kind of performance until we can recover both the players," he said.

Chennaiyin FC have a new head coach in the guise of Owen Coyle, after the club parted ways with John Gregory. Currently ninth in the table, the former champions have been shambolic this season and look out of their depth. Also, they have just won once this season.

Ahead of the match, Coyle revealed that his team can still reach the play-offs. "The first aim is to win games and do things systematically. I do recognize there are a lot of good opponents in the league. But we also have players with whom it is achievable to reach the play-offs," he said.

"We are very respectful of our opponent (Jamshedpur), because they have great quality. But we don’t come with fear also. If we are at our best tomorrow, we can win the game," he further added.