Pakistan survived a scare to beat Afghanistan by three wickets in an enthralling Cricket World Cup contest at Headingley, Leeds on Saturday. Imad Wasim remained unbeaten on 49 off 54 balls as the former champions kept their hopes alive for a spot in the semi-finals. Catch highlights of Pakistan vs Afghanistan here 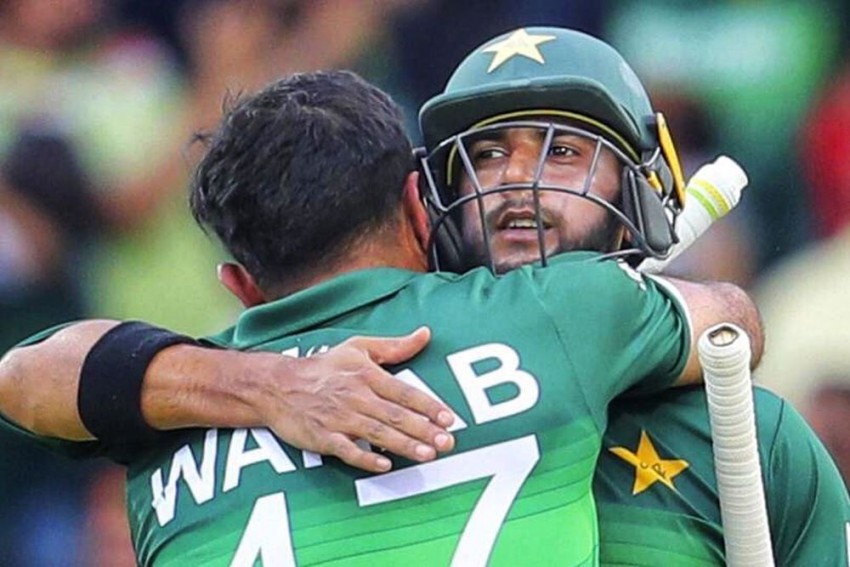 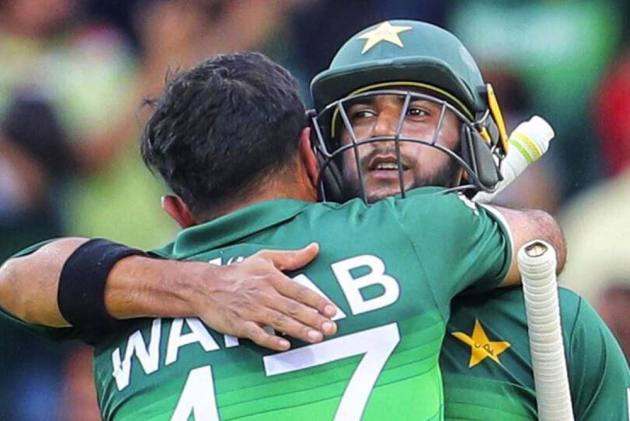 Pakistan survived a mighty scare to continue their surge towards the Cricket World Cup semi-finals with Imad Wasim (49*) keeping his cool to guide them to a tense three-wicket win over Afghanistan at Headingley, Leeds on Saturday. Once again, Afghanistan came close to causing an upset but were denied by Imad, who emerged an unlikely batting hero along with Wahab Riaz (15 off 9), who hit a timely six off Rashid Khan to release the pressure. Earlier, pacer Shaheen Afridi's four-wicket haul helped Pakistan limit Gulbadin Naib’s side to 227/9. Get highlights of Pakistan vs Afghanistan here (SCORECARD | POINTS TABLE | FULL SCHEDULE) (AUS vs NZ - AS IT HAPPENED)

Imad Wasim, Player of the Match: "When I went in, Rashid Khan was bowling brilliantly. I couldn't pick him to be honest. But we knew that if we play 50 overs, we'll win. Gulbadin was the only bowler to be targeted, the wicket was turning square. If you take risks against them you can lose your wicket. Thank you very much to the crowd, it feels like home here. This is for the crowd. If we win the next game, you never know what happens. This win gives us confidence as well."

22:24 hrs IST: FOUR! That's it. Pakistan win by three wickets. They are alive in the World Cup 2019. Pakistan are now in fourth place on the points table, a point ahead of England.

21:45 hrs IST: FOUR! Juicy full toss from Naib and Imad hits it past the fielder at mid-off. Much-needed boundary for Pakistan, who are 169/6 after 42 overs. They need 59 off 48. Mujeeb Ur Rahman comes back into the attack.

21:36 hrs IST: WICKET! Sarfaraz looking for that second run but it was never there. This is poor cricket from Pakistan. They are throwing this away. Shadab Khan comes to the crease. Pakistan are 157/6 after 40 overs, need 71 off 60.

21:18 hrs IST: OUT! Sohail beaten going onto the back foot and given LBW. Just the wicket Afghanistan would've been looking for. First scalp for Rashid. Imad Wasim comes to the crease. Pakistan are 142/5 after 35 overs.

21:00 hrs IST: OUT! Hafeez throws away another start. Shahidi takes an easy catch at point. Second wicket for Mujeeb. Sarfaraz Ahmed comes to the crease. Pakistan are 124/4 after 30 overs.

20:48 hrs IST: FOUR! Too short from Shinwari and Sohail drives through extra cover for a boundary. Fourteen off the last two overs. Pakistan are 113/3 after 27 overs. Hafeez 17*, Sohail 13*

20:34 hrs IST: The time is now for Afghanistan spinners to put pressure on Pakistan batsmen and given Pakistan's poor chasing record, Afghanistan should fancy their chances here. Pakistan are 94/3 after 23 overs. Hafeez 8*, Sohail 4*

20:15 hrs IST: OUT! Massive blow to Pakistan. Azam falls for 45(51) - bowled around his legs. Goes for the sweep but the ball doesn't turn much and it clips his leg stump. Nabi on fire! Haris Sohail comes to the crease. Drinks are on the field now.

20:09 hrs IST: OUT! Imam charges down the track but is beaten in the air and the away turn. Ikram dislodges the bails quickly. First wicket for Nabi. Mohammad Hafeez comes to the crease. Pakistan are 72/2 after 16 overs.

20:02 hrs IST: Rashid Khan comes into the attack for the first time. Can he strike?

If Pakistan finish with nine points, they can still qualify if -

--> England lose both their remaining matches

--> Sri Lanka lose at least one

19:39 hrs IST: Expensive over from Naib, 10 off it. Pakistan are 42/1 after 8 overs. Imam 22*, Azam 20*. Both batsmen are looking comfortable now. One big partnership for Pakistan and game over! Afghanistan, on the other hand, need wickets at quick intervals.

19:21 hrs IST: FOUR! Poor delivery from Mujeeb. Too short and Imam just helps it past the fielder at short fine leg. Pakistan are 17/1 after 3 overs. Imam 9*, Azam 8*. Hassan to continue.

19:13 hrs IST: OUT! Mujeeb strikes second ball! Zaman given LBW but the batsman goes up to review. UltraEdge shows there was no bat. Dream start for Afghanistan. Babar Azam, who hit a century against New Zealand, comes to the crease. Pakistan are 6/1 after the first over. Hamid Hassan comes into the attack.

18:12 hrs IST: OUT! Pitched up from Shaheen, Najibullah looks to hit it through cover thick inside edge onto off stump. Shaheen with three wickets in his second successive game. Rashid Khan comes to the crease. Afghanistan are 203/7 after 45 overs.

18:04 hrs IST: Six an over from here and Afghanistan will get to 234. Should be a good score keeping in mind the fact that they have three good spinners in Rashid Khan, Mohammad Nabi and Mujeeb Ur Rahman.

17:42 hrs IST: OUT! Short ball from Wahab, Nabi goes for the pull but isn't in control of it and Amir takes a good low catch at fine leg. First wicket for Wahab. Afghanistan are 169/6 after 37 overs. Samiullah Shinwari comes to the crease.

A group of fans were evacuated from Headingley after a fight broke out between the two groups of supporters during Afghanistan's innings. Read full story here

17:27 hrs IST: FOUR! Fuller delivery from Amir and Najibullah flicks it through mid-wicket for a boundary. Afghanistan are 152/5 after 34 overs. Najibullah 15*, Nabi 11*. Wahab Riaz comes back into the attack.

In one of the marquee clashes of this World Cup , trans-tasman rivals New Zealand (NZ) and Australia (AUS) face off at the Home of Cricket, Lord's in London. Catch live updates and of NZ vs AUS here

16:54 hrs IST: OUT! Now Imad joins the party, gets Ikram, who struggled during his 66-ball stay at the crease. Managed just 24. Hafeez takes a simple catch at long-on. Najibullah Zadran is the new man in. Afghanistan are 125/5 after 27 overs.

16:49 hrs IST: OUT! Flighted delivery from Shadab, Asghar looks to hit it to leg-side but misses and the ball gets past his inside edge onto off stump. Important breakthrough for Pakistan. Mohammad Nabi, who hit a fighting half-century against India, comes to the crease. Afghanistan are 122/4 after 26 overs.

South Africa would love the chance to start this World Cup all over again, but they will have to console themselves with a Hashim Amla throwback instead. The South African great rolled back the years with a masterclass in Durham on Friday as his side completed a routine nine-wicket win over Sri Lanka. Read full story here

16:30 hrs IST: Wahab keeps things tight. Fifty partnership between Asghar and Ikram. Twenty-six runs off the last 30 balls. Turning out to be decent phase for Afghanistan, who are 107/3 after 21 overs.

16:19 hrs IST: SIX! Asghar gets to the pitch of the ball and smashes it over wide long-on for a maximum. He's choosing the right deliveries to go after. Costly over from Shadab, 13 off it. Afghanistan are 96/3 after 18 overs. Asghar 28*, Ikram 12*

16:05 hrs IST: FOUR! Good length from Wahab, Ikram comes on the front foot to defend, but gets the outside edge and it runs away to the third man boundary. Afghanistan are 77/3 after 15 overs. Ikram 11*, Asghar 10*. Leggie Shadab Khan comes into the attack.

16:00 hrs IST: SIX! Flatter delivery from Imad, Asghar comes down the wicket and smacks it over deep mid-wicket for a maximum. Fourteen runs off the last 12 deliveries. Afghanistan are 71/3 after 14 overs. Wahab Riaz comes into the attack.

15:53 hrs IST: OUT! Arm ball from Imad, Rahmat looks to flick but due to lack of pace gets a leading edge and Babar Azam takes a neat catch at cover. Three down! Asghar Afghan comes to the crease. Afghanistan are 57/3 after 12 overs.

15:44 hrs IST: Impressive over from Imad, just one off it. Afghanistan are 46/2 after the end of first Powerplay. Rahmat 26*, Ikram 0*. Another change in bowling. Mohammad Hafeez comes into the attack.

15:41 hrs IST: FOUR! Short of a length delivery from Shaheen and Rahmat flicks through fine leg. Easy pickings! Fourth boundary for him. Afghanistan are 45/2 after 9 overs. Imad Wasim comes back into the attack.

15:37 hrs IST: Back-to-back tidy overs from Amir. No margin for error. Would be great for Pakistan if he can get a couple of wickets here. Afghanistan are 40/2 after 8 overs. Rahmat 21*, Ikram 0*

15:33 hrs IST: FOUR! Overpitched from Shaheen and Rahmat hits it straight down the ground. Seven off the over. Afghanistan are 39/2 after 7 overs. Rahmat 20*, Ikram 0*

15:28 hrs IST: Solid over from Amir, only one run off it. Ikram Ali Khil was adjudged LBW but UltraEdge confirmed a huge inside edge. Afghanistan are 32/2 after 6 overs. Shaheen to continue

15:22 hrs IST: OUT! What an eventful over! Shaheen goes for 14 runs but picks the all-important wickets of Naib and Hashmatullah Shahidi off consecutive deliveries. The Afghanistan captain got a big nick and Sarfaraz did the rest behind the stumps. Shahidi, on the other hand, got a leading in an attempt to work a full ball toowards leg-side and the mid-off fielder - Imad - completed an easy catch. The left-arm pacer misses hattrick - four leg byes off the last delivery. Afghanistan are 31/2 after 5 overs.

15:14 hrs IST: FOUR! Short delivery from Amir, Rahmat gets into position early and pulls it over mid-wicket for another boundary. Shot! Afghanistan are 17/0 after 4 overs. Rahmat 12*, Naib 5*. First change in bowling. Shaheen Afridi comes into the attack.

15:10 hrs IST: FOUR! Fuller length from Imad, Naib leans forward and times it well in the gap between mid-off and cover. First boundary for him and Afghanistan, who are 9/0 after 3 overs. Naib 5*, Rahmat 4*

15:03 hrs IST: Both Naib and Rahmat off the mark with a single. Decent start from Imad. Afghanistan are 5/0 after the first over. Mohammad Amir comes into the attack.

14:33 hrs IST: Afghanistan have won the toss and have opted to bat

13:56 hrs IST: STAT ATTACK - Afghanistan have lost the most wickets (47) to fast bowlers in this World Cup.

13:42 hrs IST: Afghanistan have lost their last seven ODIs, all at this World Cup - their longest losing run in the format.

13:30 hrs IST: Pakistan are in the exact same position at this World Cup (W3, L3, NR1) as they were at this stage in 1992 when they went on to become champions; to continue that similarity, they need to win all of their remaining games through to the final.

13:25 hrs IST: Rashid Khan (Afghanistan) has conceded the most sixes by any bowler at this World Cup, but 11 of those 12 came in one game against England.

13:19 hrs IST: STAT ATTACK - Pakistan have won all three of their previous men's ODIs against Afghanistan, although this will be their first World Cup meeting.

13:15 hrs IST: Hello and welcome to Outlook's live coverage of the ICC World Cup 2019 encounter between Pakistan and Afghanistan.

Afghanistan will look to seek confidence from their warm-up fixture against Pakistan, where they had emerged victorious by three wickets. Afghanistan have shown flashes of brilliance in almost all their games, but are yet to put on an all-round match-winning performance.

Afghan bowlers gave them a great chance to cause the tournament's biggest upset against India but their batsmen couldn’t stitch partnerships.

If Pakistan beat Afghanistan and Bangladesh, their chances of reaching the semis would increase but they would also have to rely on the results of other matches. (SCENARIOS)

The inclusion of Haris Sohail at the expense of the out-of-form Shoaib Malik has lent stability to Pakistan's batting.

Left-arm pacer Shaheen Shah Afridi has added firepower to their bowling that is led by Mohammad Amir.

"We've kept it very simple. We are going from match to match. They (Afghanistan) have quality spinners and we've seen a lot of videos and we've worked from them. And hopefully we'll see a good match,” said Sohail, who hit half-centuries against South Africa and New Zealand.