Lionel Messi has now scored 50 direct free-kicks for Barcelona, with Valencia the latest to suffer from his long-range set-piece expertise 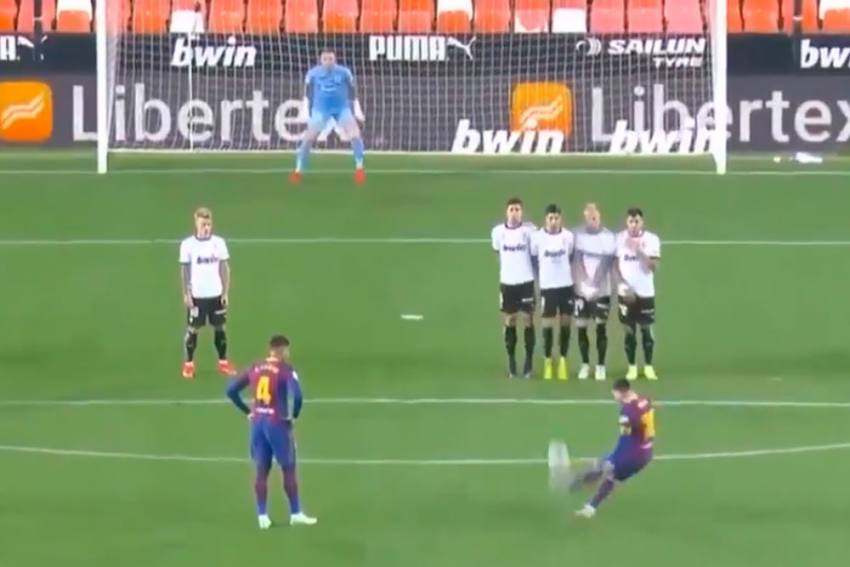 Of Lionel Messi's stunning set-piece career haul, 39 of his free-kicks have come in La Liga but few will have been as important as the curling strike that ultimately made sure of the points at Mestalla.
Screengrab: Twitter
Omnisport 2021-05-03T08:37:45+05:30 Lionel Messi Scores Free-kick Landmark Goal To Edge Ahead Of Cristiano Ronaldo - WATCH 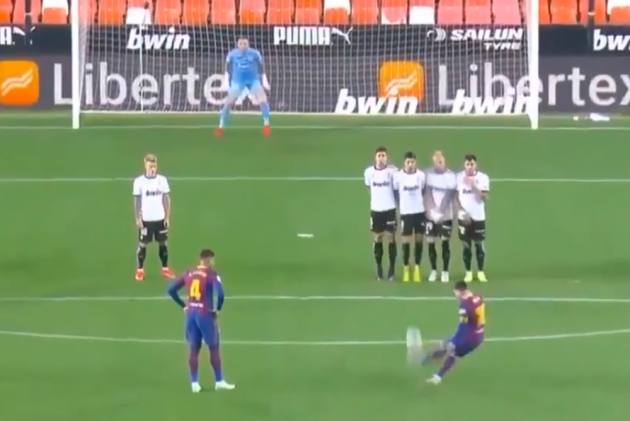 Messi's two goals in a 3-2 victory at Valencia on Sunday took him to 28 league strikes for the season, and that also meant the record six-time Ballon d'Or winner stayed ahead of Cristiano Ronaldo in their friendly long-distance rivalry.

Barca captain Messi's seasonal tally is one more than Juventus' former Real Madrid talisman Ronaldo has managed in the current Serie A campaign, after the Portuguese netted twice in a win at Udinese earlier on Sunday.

Both are leading the way in their respective leagues, and only 36-goal Bayern Munich forward Robert Lewandowski has scored more times than Messi in the top five European leagues in the current campaign.

Of Messi's stunning set-piece career haul, 39 of his free-kicks have come in LaLiga but few will have been as important as the curling strike that ultimately made sure of the points at Mestalla, giving Barcelona a 3-1 lead that was trimmed when Carlos Soler hit an excellent consolation.

Barcelona head coach Ronald Koeman was a free-kick specialist himself, but he was absent from the touchline against Valencia.

That was because Koeman received a two-match touchline ban for the remonstrations during Thursday's shock defeat to Granada that saw him sent off.

In his place, Koeman's assistant Alfred Schreuder led the team, and it was down to the former Hoffenheim boss to dampen down excitement about this coming Saturday's clash between Barcelona and current leaders Atletico Madrid at Camp Nou.

Barcelona would go top of LaLiga by one point, for a little over 24 hours at least, should they win that game.

There are just four rounds of fixtures to come, and next week's games appear highly significant, given Real Madrid and Sevilla, the other two teams in title contention, also go head-to-head.

"We are all close," said Schreuder. "But we are there. We don't look at other teams, only at ourselves. Next week isn't a final, we have four matchdays in which we have to try to win.

"Yes, we trust our players to win LaLiga. We have reduced the gap to Atletico since January. We have competed well in these last three months."

The loss to Granada was a juddering result for Barcelona, but they had enough to fend off Valencia.

Messi missed a penalty but scored seconds later as the ball pinged around the Valencia 18-yard box, while Antoine Griezmann was also on target as Barcelona reacted positively to going behind early in the second half.

"We have shown character," Schreuder said. "We believed in what we were doing."