Lionel Messi was officially no longer a Barcelona player on Thursday, following the expiration of his contract 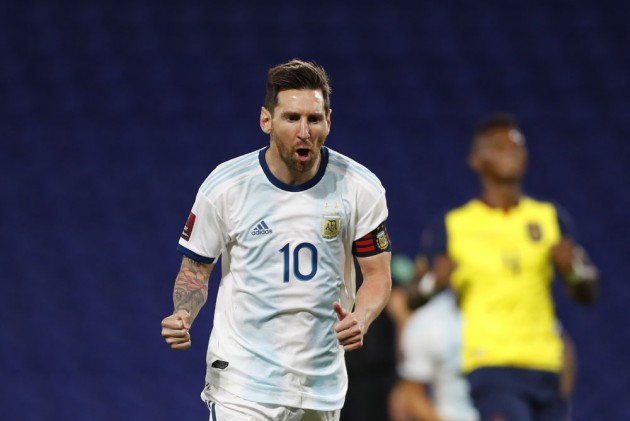 Barcelona's poor finances have become the stumbling block to getting Lionel Messi to sign another contract, according to club president Joan Laporta. (More Football News)

Messi was officially no longer a Barcelona player on Thursday, following the expiration of his contract. That came 16 years after the forward signed his first profession contract with the club that he joined at age 13.

Laporta has continued to mark a cautiously optimistic tone when asked if he was close to convincing Messi to stay put. Laporta was club president when a teenage Messi had his breakout. He returned to run the club in March after winning an election with the promise he would use his good relationship with Messi to get him to stay.

Late on Wednesday, Laporta told a popular sports talk radio show that the deal was being held up only because of the Spanish league's strict financial fair play rules.

"We want him to stay and Leo wants to stay, it is all going well," Laporta told Onda Cero radio.

"We still have to deal with the issue of financial fair play. We are in the process of finding the best solution for both parties."

Barcelona's all-time leading scorer is in Brazil leading Argentina at the Copa America, far from the hubbub at Camp Nou.

Barcelona's finances suffered a huge blow last season, when the questionable management by the prior club board was exacerbated by a drop in revenues provoked by the pandemic.

When Laporta returned to power, he inherited a club saddled with debt of 1.2 billion euros (USD 1.4 billion) and massive contracts that former club president Josep Bartomeu gave players, including Messi.

Messi's previous contract, signed in 2017, earned him an eye-popping138 million euros (USD 164 million) per season. Laporta has said that Messi is willing to take a significant pay cut, but even so, the club is apparently struggling to make the numbers work.

Laporta recently said Barcelona's finances "were worse than I had imagined." He said the payroll plus other payments tallied 650 million euros (USD 771 million).

While the 34-year-old Messi is still the team's best player, other players the club has spent big on in recent years have produced mixed results. Their high salaries now make them difficult to transfer to other clubs.

As Laporta recently told La Vanguardia newspaper, "the salaries for Barcelona's players are not comparable to those of other clubs."

Last season, the club practically gave Luis Suárez away to Atlético Madrid to shed his salary. The Uruguay striker went on to lead Atlético to the league title.

Now Laporta is facing similarly difficult choices with players such as Antoine Griezmann, Philippe Coutinho and Ousmane Dembele. Bartomeu spent big to sign all three, but none of them have lived up to their cost.

Forced to get creative, Barcelona has signed only free agents this summer to avoid transfer fees.

The sports media linked Messi to a possible move to Paris Saint-Germain to reunite with Neymar, or to Manchester City to play again for Pep Guardiola. But those rumors have died down in recent weeks.

And while Messi may be free, his shirt is still on sale at the Barcelona store.