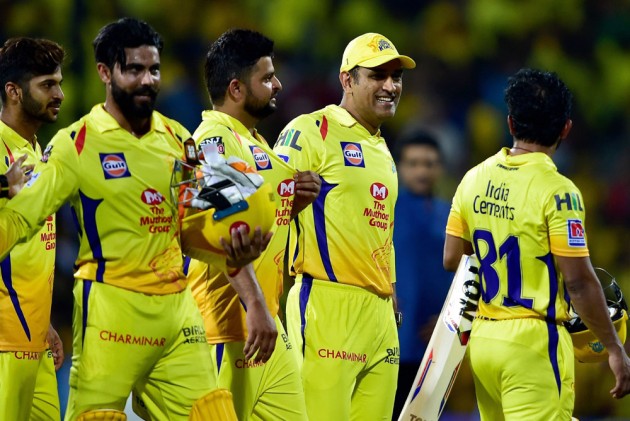 Harbhajan Singh rolled back years to show the relevance of a finger spinner in shorter format as CSK extended their winning streak to seven matches. Last time they lost to RCB was way back in 2014, in Ranchi. On a tricky pitch that assisted slow bowlers, RCB were shot out for 70 in 17.1 overs, a target that CSK achieved in 17.4 overs.

RCB in defeat maintained their inglorious record against CSK and also had the ignominy of ending with the sixth lowest total in the league.

Skipper Dhoni's move to open with Harbhajan (3/20 in 4 overs) paid rich dividends as he removed rival skipper Kohli (6) in the fourth over and RCB never recovered from that early blow.

Dhoni's reading of pitch was immaculate as a top score of 29 from Parthiv Patel was a testimony to that and the time that CSK needed to score the runs.

Once Harbhajan's finger spinners had inflicted telling damage on the psyche of the RCB line-up, Imran Tahir (3/9 in 4 overs) tormented the visitors even more with his googlies that killed the contest in the first half.

With so much assistance for spinners, Ravindra Jadeja wasn't going to be left behind, finishing with 2/15 in 4 overs.

Having gauged the pace of the pitch, Harbhajan altered the length of his deliveries effectively and also reduced the pace at times to trouble the batsmen. There are times Harbhajan dropped his length but the slowness of the track made batsmen indecisive.

While he was lucky as his off-break dropped short but Kohli's mistimed pull-shot was taken by Jadeja at mid-wicket boundary.

Moeen Ali slog swept Harbhajan for a six but that was all that he could manage with a length delivery stopping on him as he tried to check his drive and loopy return catch was gleefully accepted.

AB de Villiers (9) wanted to hit out of trouble and was first dropped by Imran Tahir and off the very next ball was caught by Jadeja at mid-wicket boundary. With Shimron Hetmyer (0) getting run-out needlessly, RCB were in the dumps even before halfway stage.

It was the perfect platform for Tahir and Jadeja, who were unplayable with the pitch offering reasonable turn and it only helped that the lower-order's confidence was shot to pieces.

The way each batsman reacted to Tahir's googlies was different. Left-hander Shivam Dube (2) didn't read the googly and edged to slips. Navdeep Saini padded one in his intent to defend while Yuzvendra Chahal was holed out at deep square leg trying to hit out of trouble.

Parthiv Patel (29) was the top-scorer and the last man dismissed but hardly looked convincing.

The pitch wasn't an easy one to bat on but 70 was too small a total to defend for RCB even though they stretched CSK for nearly 18 overs.

Suresh Raina (19) didn't score much but he did complete 5000 runs in IPL when he reached an individual score of 14. An IPL 'legend', Raina is the first player in tournament's history to achieve the feat.