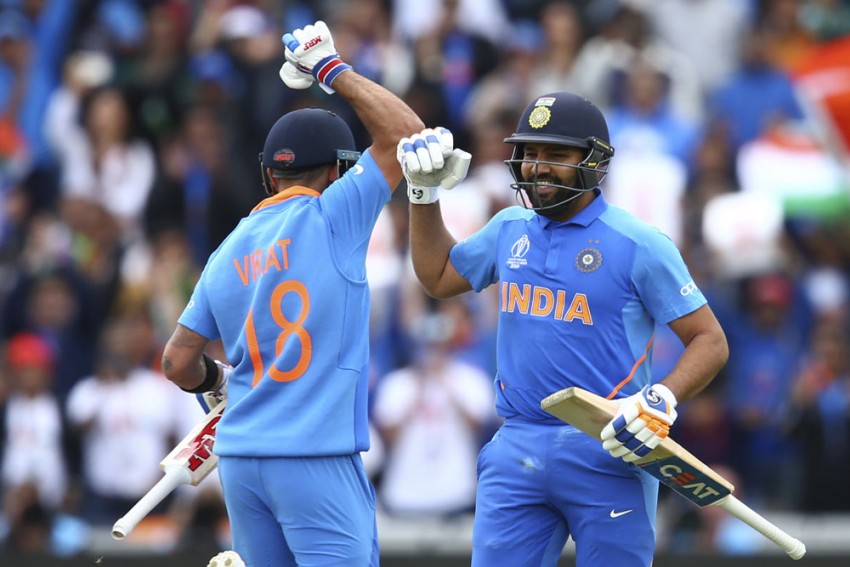 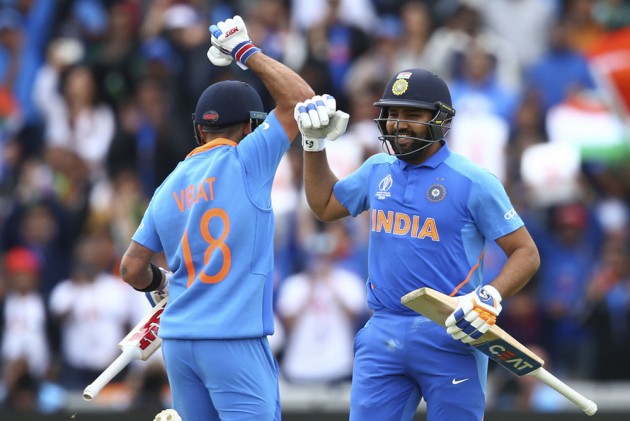 That refrain, saluting their captain and hero, sung by the Indian fans who made up at least 80 per cent of a raucous Manchester crowd, was by far the most ubiquitous chant ringing around Old Trafford on Sunday.

Yet in the end, the day didn’t really belong to Kohli – not for the first time at this ICC Men’s Cricket World Cup, it was the Rohit Sharma show.

Perhaps there is a part of Sharma – the same ruthless, single-minded part driving him to be a success at the very pinnacle of cricket – that resents the adulation and fervour Kohli inspires in Indian supporters, believing it should be him engendering that zeal.

Maybe in any other team, or at any other time, it would be. But if it does bother him, he certainly doesn’t let it affect his performances, which are becoming reliably spectacular.

Against Pakistan, where he led from the front with a mesmerising century, there were chants of ‘Rohit, Rohit, Rohit’ of course, but they seem less well-practised, a little more out-of-sync than the choruses glorifying the captain, or even ex-skipper MS Dhoni, which are second-nature.

And Kohli has undoubtedly earned that passion by cementing himself as the world’s premier batsman across all three formats – the only man in history to average more than 50 in Tests, ODIs and T20Is.

Even during the Sharma show, as the opener crushed 140 runs off 113 balls against India’s greatest rivals, Kohli added to his legend.

The skipper’s supporting knock of 77 saw him pass 11,000 ODI runs in a ludicrous 54 fewer innings than the second-quickest man to that milestone, Sachin Tendulkar.

Kohli has every shot in the book and invariably plays them more classically and artistically than the book could ever wish to teach.

Watching him bat is to revel in a perfectly-structured piece of art, witness a machine so finely-tuned that seemingly nothing can go wrong, yet seeing Sharma at the crease may be the more visceral, exhilarating experience.

The way he effortlessly climbs on to his toes, leans into a short, wide ball from Hasan Ali and cuts it for six.

The way he seemingly defies the laws of time to create an extra half-second to step back, swivel and pull Hasan for another maximum.

The way he reads the ball out of the hand, waits for the turn and languidly drives Shadab Khan to the point boundary.

This was the latest in a series of beautifully-constructed innings by the 32-year-old, who now joins Tendulkar, Ajinkya Rahane and Kohli (twice) as the only men to score 50+ in five consecutive ODI innings for India.

The modus operandi for Sharma in recent times is to start conservatively, see off the new ball and then accelerate to a big score.

Sometimes that early survival involves riding his luck, as against South Africa earlier this tournament when only lack of luck for Faf du Plessis’ saw him reach double figures.

But he did and took full advantage by going on to plunder an unbeaten 122 that ultimately steered India to victory and caused Kohli to label it Sharma’s “best innings by far” – quite a claim considering the world-record 264 he smashed against Sri Lanka in 2014.

Yet against Pakistan, he took a different tack and raised the tempo from the off: new ball be damned.

This could have been a desire to provide a safety net if the game was reduced in length due to the ever-present threat of rain or because he felt more responsibility with the largely untested Rahul opening alongside him in the absence of the injured Shikhar Dhawan.

Either way, the strategy was a roaring success and led to an 85-ball ton by the end of the 30th over – the earliest point he has reached the milestone in an ODI.

Kohli’s contribution (77 off 65) to the eventual total of 336/5 was also vital and perhaps fittingly he saved his best shot – a glorious punch for four between cover and mid-off – for the first ball he faced after Sharma brought up his century, just in time to turn the crowd’s chants once more…

Given Kohli’s brilliance over the past decade, it’s easy to forget that before his now-captain, Sharma was the golden boy of Indian cricket – the natural successor to Sourav Ganguly, Tendulkar and Virender Sehwag that set pulses racing.

He had 23 ODIs under his belt by the time Kohli debuted in August 2008 but his struggles to completely impose himself in Test cricket and occasional dips in form mean he has taken more of a winding path to greatness than the skipper.

He is also unfortunate to have the moniker ‘World Cup winner’ absent from his CV after being dropped a month before India’s victorious 2011 campaign, yet regaining his place for the first game after its conclusion.

However, now playing the most consistently-brilliant cricket of his life in a team full of world-class stars, Sharma might just earn that missing medal at Lord’s come mid-July.