A first-half strike from Saad Uddin in the 42nd minute helped Bangladesh take a shock lead against the Indian national football team in their 2022 FIFA World Cup qualifier. In the 88th minute, Adil Khan found the equaliser for the Blue Tigers at the Salt Lake Stadium. 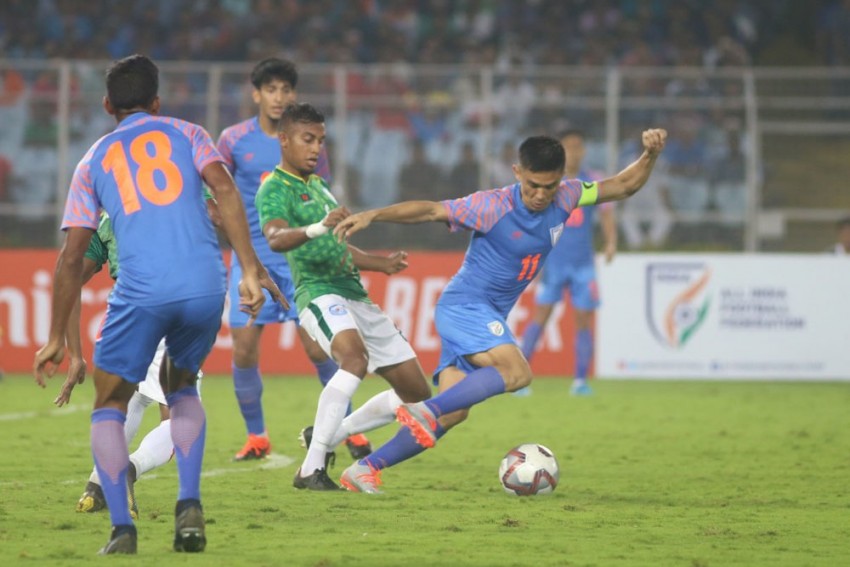 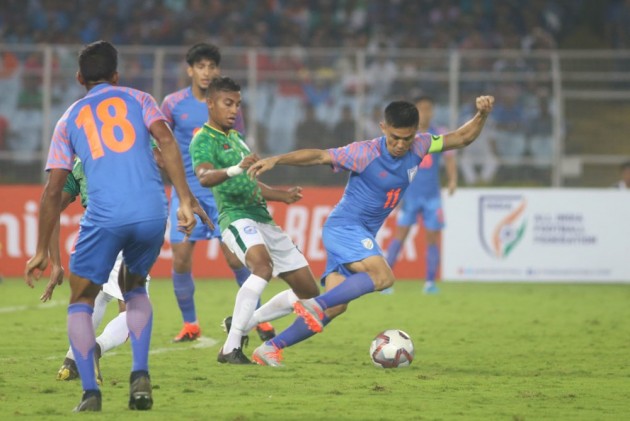 India snatched a 1-1 draw from the jaws of defeat against much lower-ranked Bangladesh to dent their chances of 2022 FIFA World Cup qualification in a Group E tie, at Kolkata's Salt Lake Stadium on Tuesday.

A first-half strike from Saad Uddin in the 42nd minute helped Bangladesh take a shock lead against India, who are 83 places above them and drew 0-0 against Asian champions Qatar in their last game.

The hosts had a flurry of chances to peg back with Anas Edathodika's shot headed out by Mohammad Ibrahim on the goalline in the second half. It was only in the 88th minute that centre-back Adil Khan headed in a goal to equalise.

Bangladesh too, could have doubled their advantage as Mohammad Ibrahim's shot found the crossbar in the second-half and Adil made a goalline clearance.

The result means India move to two points from three games after losing their campaign opener to Oman. Bangladesh, who prior to this game had lost both their matches against Afghanistan and Qatar, logged their first point but remained at the bottom of the five-team group.

Chhetri got a chance to get India ahead in the 5th minute when his first-time volley after receiving a pass from Ashique Kuruniyan went straight to visiting goalkeeper Ashraful Islam.

India enjoyed the lion's share of ball possession and tried hard to open up the Bangladesh defence but the away side held firm as the hosts fluffed their lines in the final third.

Bangladesh got their first opportunity in the 31st minute when Biplo Ahamed sneaked into the box only for Anas to intercept at the right time.

Four minutes later, Bangladesh goalkeeper Ashraful was forced into a fingertip save from Manvir Singh's looping header as India kept knocking at the door.

But against the run of play, Bangladesh nosed ahead three minutes before halftime. Skipper Jamal Bhuyan swung in a delectable free kick for Saad to nod in past Gurpreet who failed to catch the ball.

After the break, Bangladesh missed a golden opportunity to double their advantage when Sohel Rana cut in from the left to set up Mohammad Ziban, whose shot was saved well by Gurpreet.

India then fluffed two gilt-edged chances at and just after the hour mark as Anas' header was first saved on the goalline by Ibrahim and then in the 66th minute, Manvir mistimed his run to spurn a header from close range.

At the other end, Adil made an acrobatic clearance to save Gurpreet the blushes after Ziban got behind the defence and lobbed the ball past India's tall custodian.

Chhetri wasted wide from substitute Brandon Fernandes' corner in the 76th minute as India threw the kitchen sink at their lesser fancied rivals.

The effort paid off as Adil powered in a header from Brandon's corner at the near post to send the crowd into raptures.

Chhetri dribbled past two defenders soon after but the 35-year- old's shot was weak as the stadium reverberated with his chants.

The packed 65,000 spectators were left high and dry in the end as India could not record a win which was expected. After the match, the faces of the Indian players looked dejected, especially considering the type of goal they conceded in the first half, with head coach Igor Stimac branding it a "silly goal".

Speaking to the media, he said, "We knew Bangladesh would get a few chances because when you play so high up, you will face problems in the game. We faced that and we conceded a very silly goal. When you concede goals like that, you cannot expect to win the game."