Daniil Medvedev had few complaints after easing into the fourth round at Roland Garros on a rainy Friday in Paris. 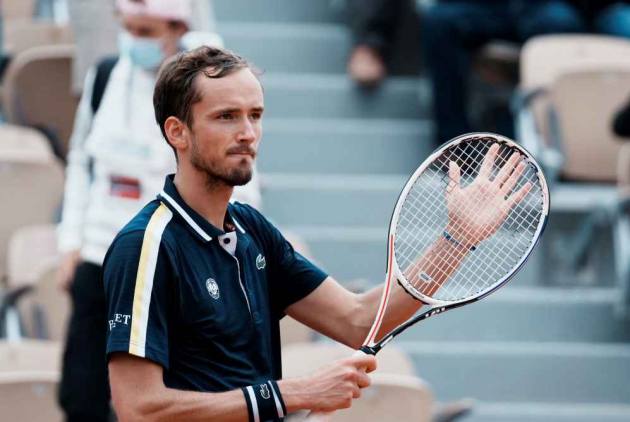 The weather could not dampen the spirits of Daniil Medvedev as he reached the fourth round of the French Open for the first time on Friday. (More Sports News)

The Russian was in good form as he beat Reilly Opelka 6-4 6-2 6-4 amid rainy conditions in the French capital.

The second seed, who will meet clay-court specialist Cristian Garin next, hit 28 winners to 16 unforced errors in a dominant display on Court Suzanne Lenglen.

It was a display to instil some confidence into Medvedev as he chases the world number-one spot, which he will claim if he reaches the final and Novak Djokovic does not.

"Clay at Roland Garros feels great this year," he said. "As I said after the first round [against Alexander Bublik], now I know that to beat me, the guys have to play well. I am definitely happy with my game and my return today, because I actually hit more aces than him. That's a great achievement.

"I think a little bit [the] rainy conditions, wet, heavy court – which I totally hate on clay – helped me today. In these conditions, even guessing one side, I could still get back to another side if I saw the serve coming the other way."

CONFIRMED: @AlexZverev will come up against @keinishikori in the #RolandGarros 4R.

Who makes the quarters?   pic.twitter.com/bVafqpZSzr

Alexander Zverev joined Medvedev in the last 16, the sixth seed saving three set points in the second set against Laslo Djere before taking nine of the next 11 games to ease to a 6-2 7-5 6-2 win.

"I was down 3-5, 40-0 on his serve and you don't always come back from that score," said Zverev, who will now meet three-time quarter-finalist Kei Nishikori. "He played a fantastic match, he is playing great on this surface so I knew I had to play much, much better than the first two rounds and I did that today."

Twelfth seed Pablo Carreno Busta was also a straight-sets winner, seeing off Steve Johnson to set up a meeting with Stefanos Tsitsipas, who survived a stern examination by John Isner.

Having lost the first set to the big-serving American, Tsitsipas recovered to win 5-7 6-3 7-6 (7-3) 6-1 at close to midnight local time to extend his winning streak on clay to seven matches.

Federico Delbonis stunned 27th seed Fabio Fognini 6-4 6-1 6-3. He will take on Alejandro Davidovich Fokina, who came through a brutal five-set contest with Casper Ruud that lasted more than four and a half hours.

"I think this match represents Roland Garros," said the man known as 'Foki' to his fans. "This match was very tough. He played unbelievable.

"In the fifth set, we were in [a] battle every game. Every game we wanted to win [and] to break the serve of the other guy. It was, with all [the] emotions inside [and] with all the crowd singing your name, unbelievable!"