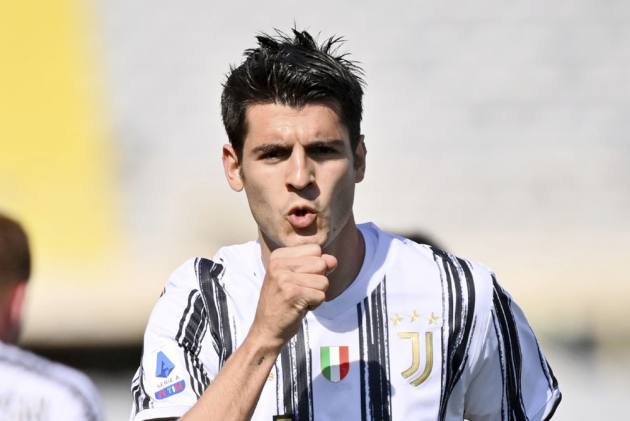 Alvaro Morata scored just 31 seconds after coming on as a substitute but Champions League hopefuls Juventus had to settle for a 1-1 draw at Fiorentina. (More Football News)

Dusan Vlahovic scored his 17th Serie A goal of the season with a first-half penalty to put the relegation-threatened Viola in front at Stadio Artemio Franchi, after Adrien Rabiot handled in the area.

Juve boss Andrea Pirlo made a double substitution at the break and it was Morata, one of the two introduced, who levelled with a stunning strike in the first minute of the second half.

The reigning champions were unable to secure a Sunday afternoon victory that would have moved them into second place and fifth-placed Napoli had the chance to join them on 66 points if they beat Torino on Monday.

31 - Álvaro Morata has scored 31 seconds after the start of the second half, or from the start of his game as substitute: this has been the fastest goal for a substitute in this #SerieA season. Ready.#FiorentinaJuve

Fiorentina made a promising start and Wojciech Szczesny raced out sharply to deny number Vlahovic after Franck Ribery played the striker in.

Juve had a huge stroke of luck when a deflected long-range drive from Erick Pulgar struck the post and bounced into the arms of Szczesny, but Vlahovic gave the Viola a deserved lead just before the half-hour mark.

Referee Davide Massa pointed to the spot following a check on the pitchside monitor, with the ball having struck Rabiot's arm as he jumped to try and head clear, and Vlahovic made the midfielder pay with a cheeky 'Panenka' penalty.

Aaron Ramsey missed a good opportunity to equalise late in the first half when Fiorentina were opened up by a slick move and the Wales international poked wide at full stretch with only Bartlomiej Dragowski to beat.

Pirlo reverted from a three-man defensive set-up to a back four for the second half, with Morata replacing Leonardo Bonucci and Dejan Kulusevski on for Paulo Dybala.

Morata made an instant impact, getting on the end of a ball down the right channel and cutting inside sharply before picking out the far corner of the net with a sublime left-footed finish.

Juve looked a different side after the break and Nikola Milenkovic nodded clear to prevent Cristiano Ronaldo from tapping in Giorgio Chiellini's header across goal.

Ronaldo failed to head home a brilliant cross from Kulusevski six minutes from time as Juve dropped points in the battle for a top-four finish.

What does it mean? Pirlo peering over his shoulder

Juventus sporting director Fabio Paratici stated ahead of the game that head coach Pirlo's job would be safe if the team finished in the top four.

Yet a week after the Turin giants were one of 12 clubs to reveal they would break away into a European Super League, plans which collapsed soon after they were announced, they could also find themselves out of the Champions League next season.

Atalanta sat just a point behind the Bianconeri in fourth place ahead of their meeting with Bologna on Sunday evening, while Napoli also have a great chance to capitalise on Juve's failure to gain revenge on the Viola for a 3-0 home defeat in December.

Serbia forward Vlahovic has been linked with a host of leading European clubs and it is no surprise he is in demand.

The 21-year-old has scored five goals in as many games and his ice-cool spot-kick moved Fiorentina a step closer to avoiding the drop.

Ronaldo has been prolific this season, but he is enduring a frustrating spell at the moment. That is three games without a goal for the Portuguese forward, who did not hit the target with any of his five goal attempts.

The Bianconeri travel to Udinese next Sunday, with Fiorentina's next assignment coming at Bologna on the same day.